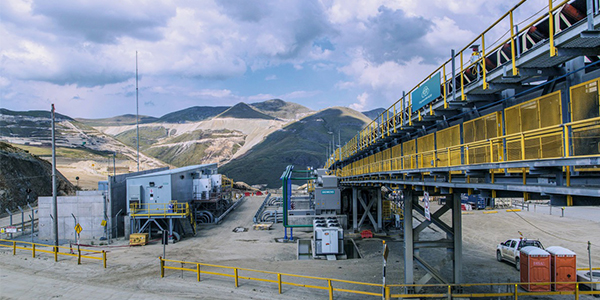 Some of the world’s best supply of copper ore can be found more than 15,000 feet up in the Chilean Andes. The Chilean government supports copper ore exports because, as the country’s largest industry, it is critical to the nation’s economy.

However, mining and transporting copper ore from mountaintops through challenging terrain presents a logistical dilemma. And that’s just the sort of challenge that is at the core of the ThyssenKrupp Robins business model. Its solution to the Chilean copper ore quandary? The world’s largest downhill conveyor system that spans 42,000 feet and is capable of carrying 9,600 tons of copper ore per hour. “We are transporting copper ore a distance and drop that’s analogous to moving rock from the rim to the floor of the Grand Canyon,” said Vice President and General Manager Christof Brewka. “No matter the size of the project, we believe that we can design a solution to any bulk material handling assignment.”

ThyssenKrupp Robins, based in Denver, Colo., is part of ThyssenKrupp, (based in Germany), one of the world’s biggest technology corporations with more than 184,000 employees worldwide working in steel, capital goods and services. The parent company has been increasingly concentrating on system solutions and innovative services in its five segments: steel, automotive, elevator, technologies and services. Many areas of ThyssenKrupp are becoming increasingly globalized. The company generates 34 percent of its consolidated sales at home, while customers outside Germany account for the remaining 66 percent, said Brewka.

Safe, sound solutions
Constructing an elaborate, jaw-dropping conveyor system that rises and falls according to the topography might present an image that could rile environmentalists, but the truth is that ThyssenKrupp Robins’ solutions are conducive to the environment. Eliminating truck transportation means eliminating pollution, noise, accidents and fossil fuel consumption.

Conveyors are also far less intrusive in the landscape than roads. Therefore, a conveyor system ultimately makes the most sense, provided of course that it’s built correctly, which is where ThyssenKrupp Robins enters the picture. Because overland conveyors do not usually link the loading point and the discharge point in a straight line due to terrain obstructions, there are limitations of right-of-way that require a unique engineering solution. ThyssenKrupp Robins is expert at constructing horizontally curved conveyors, which eliminate the need for one or more intermediate transfer stations. “A detailed analysis of the desired geometry and belt tensions provides for the necessary tilting of the idler stations along the curved sections for keeping the belt aligned,” said Brewka. “For handling and distributing bulk materials in a plant environment we can design multiple belt conveyors around an existing facility.”

The company makes troughed or pipe conveyors, all connected with chute work, straight or curved, equipped with diverted gates for splitting the material flow or with in-line material transfer.

ThyssenKrupp Robins also manufactures in-plant conveyors, which are often part of a production process and have to be fitted to the specific needs. Examples include special belt covers to withstand oily, hot or abrasive materials. Additionally, belt scales or tramp iron magnets may become part of the system, as dust suppression or collecting systems. A key conveyor type that has played a part in the company’s growth is its pipe conveyor systems. From an environmental standpoint, pipe conveyors are an effective and environmentally friendly alternative to conventional belt conveyors. Said Brewka, both the top and bottom strands of the belt are rolled into a pipe shape, totally enclosing the material within the conveyor and eliminating spillage, transfer towers, dust collection and the need for covers.”With the longest pipe conveyors and most superior designs, ThyssenKrupp Robins is the world leader in pipe conveyor technology,” said Brewka. “Our pipe conveyor systems solve many of the problems that plague conventional troughed conveyor systems such as material spillage, limited inclination angles and large horizontal curve radii. Our pipe conveyors are the ideal solution to overland haulage or in-plant conveying where there are space limitations, tight vertical or horizontal curve requirements, or the need to protect the conveyed product from the outside elements and environmental issues due to wind blown dust or spillage.”

ThyssenKrupp Robins has built pipe conveyors up to five kilometers long with as many as 65 vertical and horizontal curves. The company’s pipe conveyor curves are designed with optimized radii based on belt tension, belt modulus and buckling criteria. Their designs incorporate automatic speed controls, multiple drive load sharing and torque controls and cross-sectional fill controls.

Sulfur and coal
Another growing industry served by ThyssenKrupp Robins products is petrochemical, particularly the transport of petroleum coke and sulfur. The latter is a key ingredient for fertilizer in the agriculture/farming industry. “The petrochem industry has been a very strong market for us,” said Brewka. “Petroleum Coke and sulfur, both byproducts in the refinement process, must now be collected and transported properly. For example, sulfur is in a liquid state in the refinery, then is solidified. We pick it up and stockpile it for shipping via ocean-going vessels. Our clients in this case are the owners of storage facilities where we deploy our stacking equipment and ship loaders.”

The price of solid sulfur has skyrocketed recently, especially with a huge demand for the product coming from China, said Brewka. And although sulfur is transported in a solid state, it is a very difficult substance to handle. In dust form it is highly explosive, so it requires an experienced hand with leading edge materials handling technology, which once again describes ThyssenKrupp Robins. “We have seen ships loaded with sulfur blow up, so we know the risks, which is why we take extreme precautions and apply our vast experience to the challenge of sulfur transport. Together with our sister Thyssen Krupp companies we work together to provide an end-to-end solution in the sulfur market. We have been fortunate to capture that business.”

Another big market for Thyssen Krupp Robins is the coal industry, where is has several projects underway in Wyoming and Texas, where the company is building the world’s longest single-flight conveyor. At 12 miles in length it connects a coalfield to a power plant, and much like the copper ore solution in Chile, Thyssen Krupp has devised an environmentally safer alternative to transporting coal by trucks. “The Texas engagement came about after a new coal field was opened that is quite a distance from the power plant,” said Brewka. “Our conveyor system is superior to a truck system because it is cleaner and more cost-efficient . Yes, it is technically difficult to build an elaborate conveyor system with curves and rises, not to mention navigating right-of-way issues along the path of the conveyor. After all, you cannot just take a straight line and follow existing roadways. There are creeks and obstacles in the way, but our team of mechanical, structural, and electrical engineers are continually able to design and develop solutions that exceed expectations.”

In order to offer an end-to-end solution, ThyssenKrupp Robins manufactures a comprehensive line of machinery to facilitate the materials handling process at the beginning and end of each project. The company makes rail car loaders, rotary car dumpers, side arm dumpers, linear shiploaders, quadrant-type shiploaders. It also makes a variety of stackers ranging from non-slewing, radial, shuttle conveyors, and slewing stackers. So from beginning to end, it’s clear that ThyssenKrupp Robins has the right tools and technology to tackle problems confronting any industry that needs to transport raw materials from hard-to-reach places, effectively and cost-efficiently. And with a global parent company and a network of sister companies strategically stationed around the world, ThyssenKrupp Robins is well positioned to maintain its leadership position in bulk materials handling solutions.