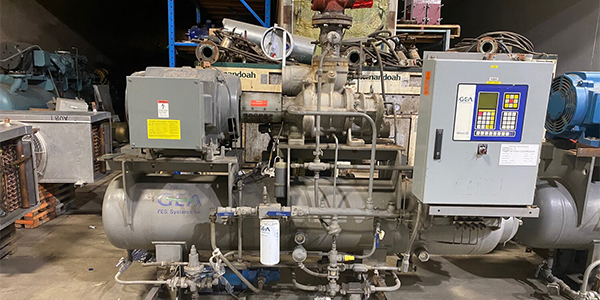 It’s important to keep your cool in business, especially when products spoil if you don’t. Which is why so many businesses rely on FES Systems. This premier manufacturer of industrial refrigeration units and custom chilling systems ensures customer products worldwide get left in the cold, maintaining temperatures below freezing ranging anywhere from 20ºF to -70ºF.

The York, Pa.-based FES Systems first warmed to the idea of making refrigeration equipment as an outgrowth of its origins in the package goods industry. In 1949, the post-war economy saw an explosive growth in comfort and convenience foods. At the time, the Fuller Company made a rotary air compressor that could be adapted for lower temperatures for use as a refrigeration boost compressor. Thus, Freezing Equipment Sales was established to design, build and install automatic freezing systems for ice cream and frozen food companies. As one of its first in a long line of innovations, FES developed and patented an oil cooling system that served as the workhorse of the frozen foods industry.

“Innovation is one of our key competitive differentiators,” explains Dennis Halsey, vice president of sales and marketing. ”We have several patents, and we have to deal with the various ‘me-toos’ that spring up. We would rather spend that time doing new things and moving forward to provide our customers with better and more efficient cooling solutions that fit their needs.”

Indeed, the evolution of FES Systems demonstrates how the company has succeeded in being first-to-market while other companies try to play catch-up. In 1954, the company moved from selling individual compressors to developing and providing complete refrigeration systems. Until 1958, FES designed, built and installed individual quick freezing (IQF) food freezing systems with capacities from 2,000 to 6,000 pounds per hour and ice cream hardening from 1,200 to 3,000 gallons per hour.

Along with the many product enhancements developed by FES Systems in the 1970s came a change in business strategy. “In addition to our food and beverage customers, we began focusing on industrial cooling, providing packaged systems for the petrochemical and pharmaceutical industries,” Halsey explains. “The difference between the two markets is that for food you’re selling compressors that contractors then integrate into their systems; for industrial chilling, we work with consulting engineers, sometimes directly with customers, to engineer complete applications.”

The company also emphasizes the use of ammonia as an environmentally friendly refrigerant. “There is widespread concern over the influence of chlorofluorocarbons (CFCs) used in refrigerants on the ozone layer,” Halsey says. “The only refrigerant with a zero ozone depletion potential, a zero global warming potential, but still with superior thermodynamic properties and worldwide availability is ammonia. FES Systems has been using ammonia since its inception over 50 years ago. The use of ammonia in refrigeration systems makes an important contribution to the preservation of the ozone layer. Moreover, ammonia quickly breaks down into its natural components of nitrogen and hydrogen, thus excluding the possibility of a risk to the climate through a direct greenhouse effect. Which is why we are convinced that, because of its efficiency and environmentally friendly properties, ammonia is an important refrigerant of the future.”

Along with its evolving business focus, FES Systems has also undergone a number of different ownership changes. In 1985, the then privately held company was purchased by the Carrier Corporation, which in 1992 sold FES Systems to the Thermo Electron Corporation. In 2000, FES became part of GEA AG of Frankfurt, Germany, and now operates within the GEA Refrigeration Division. It employs between 250 to 300 people, with contract workers added as needed to manage busy swings.

FES Systems’ products are marketed in North America by independent sales representatives who Halsey characterizes as “key extensions of our company. In many cases, they have the FES brand name integrated into their own company name. They are our prime interface with our customers.” For international sales, FES relies on agents based around the world. “The agents are more like a distributor network, though in some case they function like sales reps,” says Halsey. The breakdown between domestic and international sales differs by market segment. For food and beverage, about 90 percent of product is sold in North America. For the industrial business, it’s more evenly split. “It varies from year to year,” Halsey notes. “One year it might be 60/40 domestic versus international, another year it might be the opposite.”

There is also a difference in demand between the two segments. According to Halsey, “Food and beverage is fairly stable. On the industrial side, the chemical industry in particular, it’s more cyclical. Another big difference is that we do fewer industrial orders per year than we do for food. However, those fewer industrial sales are also much larger in scope and, consequently, represent larger revenue potential.”

Demanding Business
He adds that, “The challenge for us is accurate forecasting. For the most part, we’ve been able to stay on top of developments. The food industry growing at a three to five percent rate as we anticipated; the industrial side, in contrast, is volatile, and we’re much busier than we were a year ago.” The result, as Halsey describes it, is that, “We not only have more demand than anticipated, but also complicating matters is the availability of materials. For example, a typical lead-time for a custom motor was 12-16 weeks. Today, thanks to a booming economy and robust international manufacturing expansion, motor shops are working at full capacity and the lead time can be as much as six months. That’s a situation we’re keeping customers aware of and we have to manage as best we can.”

There’s a lot of steel that goes into making FES Systems products, and the price of steel and other raw materials has been volatile. “Steel prices today are up 240 percent over what they were in late 200,” Halsey says. “It’s not just steel, we use a lot of copper and nickel, which have also jumped in cost. Moreover, certain materials aren’t even readily available. The lead-time on some titanium product is now one year. So it’s difficult to consider it today.”

He adds that, “Prices have been going up for the past two-and-a-half years and we’ve had no choice but to pass them on the customers. This is a low margin business, and it’s just not something we can afford to absorb. However, we’ve managed this through controlled fixed price increases instead of a through a surcharge. We’re also working with our suppliers to get the best prices, but it’s a fact of life that everyone – manufacturers and customers – have to face.”

Factory Facts
All manufacturing is done in York in a 100,000- square-foot, ISO:9001-certified facility. “ISO certification has helped drive improved operational efficiency,” Halsey says. “Also, we did an overhaul of our manufacturing processes a few years ago that’s resulted in much faster throughout.”

Instead of making each package in a single-station process, the product flows through the factory floor to emerge as a complete package ready to be skidded and shipped. “Typically, it starts out as a vessel about 15 feet long,” Halsey explains. It is literally conveyed through the factory floor to stations where the subassemblies necessary for the given application are performed. The completed product is out the door in no time.”

According to Halsey, this has reduced labor costs by 15 to 25 percent. “By working from a horizontal perspective – the product is brought to the team to work on as opposed to workers bringing themselves and parts to make a piece of the product, and then cart that somewhere else – we’ve achieved improved efficiency just from making sure tools are where they are supposed to be. Instead of tools getting left on tables where they tend to collect, every tool has a spot where it is kept at the worksite where it’s needed. We have visitors here all the time. We used to make sure the factory was checked for tidiness when we knew someone was touring the factory floor. Now we don’t even worry about it. Because the shop is always in good order, people can walk in any time, and what they’ll see is a clean, efficient operation.”

While the manufacturing process remains labor dependent, Halsey notes that finding workers with the necessary skills isn’t much of an issue. “In York, there’s an excellent talent pool. There are a number of good trade schools in the area, and even the high schools have good trade programs.” Another advantage is that FES Systems is able to take advantage of a sister GEA company in Berlin to supply the compressors. And while the company relies on some offshore sourcing, it doesn’t feel that foreign manufacturers threaten its American base. “We add a lot of value that goes beyond lower labor costs. The size and complexity of our products doesn’t make it attractive for an offshore manufacturer to try to ship into the U.S. and compete on price alone,” Halsey says.

While Halsey describes the company’s business as “serving the needs of a mature market,” it is a market that continues to heat up as its needs for cooling increases.