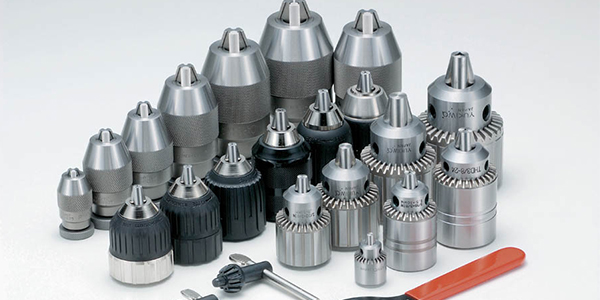 With over 400 patents Jacobs Chuck Manufacturing is a world leader in the design and manufacture of precision tool and work holding devices.

The developer and innovator of the three-jaw drill chuck, A.I. Jacobs built an enterprise based on the principle that technology and innovation are essential to achieving the competitive advantage. As a contract supplier of custom and standard drill chucks, the majority of the world’s major manufacturers of portable power drills depend on Jacobs for keyed and keyless chuck innovation. Jacobs is the only chuck manufacturer dedicated exclusively to the power tool industry and, as its more than 400 patents prove, innovation is not just its promotional buzz word…it’s a corporate commitment.

Originally located in Connecticut, Jacobs moved its headquarters and U.S. factory to Clemson, S.C., in 1959. In addition to the Clemson location, Jacobs enjoys leading positions in world-wide markets from strategically located facilities in Sheffield, England, Suzhou, China, and Bonn, Germany, from which it can meet the diversified needs of its global customers.

More than 21 of Jacobs’ 979 employees are engineers with the specific assignment of developing new technologies for drill chucks to enhance the performance, productivity and marketability of portable power tools. The company is part of the Fortune 500 Danaher Corporation, a $3.2 billion enterprise with headquarters in Washington. This affiliation brings an association with strong brand names such as Allen, Ammco, Delta, Matco, NAPA, Sears Craftsman and Veeder Root.

The Road to Keyless

Jacobs “Super Chuck” — the first precision ball-bearing industrial chuck — was introduced in 1942 and brought high precision and close-tolerance drilling performance to a wide variety of industrial applications. In 1960, Jacobs created its Multi-Craft® line, the first mass-produced keyed chucks for the do-it-yourself market, and thus made accurate drill performance affordable for the home handyman and hobbyist.

Because of an increase in consumer power tool use, Jacobs debuted the first commercially successful keyless chuck for portable power tools, called Hand-Tite®, in 1990. This breakthrough in drill chuck technology brought product differentiation and improved performance and marketability to the world’s power toolmakers.

The company also worked to increase its own production capacity to meet the growing demand for its products. For example, a unique work cell plan in place at Jacobs’ factories allows one or two operators to turn raw materials into finished products, thus increasing reliability and reducing the margin for error.

Further evidence of Jacobs’ commitment to maximizing its production capacity is its just-in-time manufacturing and precise inventory management, which has increased the available production space at the Clemson facility in the last 10 years by reducing storage space from 40 percent to 10 percent of the total.

Pledging a constant focus on technological breakthroughs, the company promises to deliver quality, innovation and global capabilities with the introduction of three significant keyless chucks by 2001. With a commitment to focus on leading-edge drill chuck products and consumer and professional end-user feedback, Jacobs is dedicated to developing innovative new products.

The two most recent significant product introductions include the 500 Series™ and the 700 Series™ chucks — both with enhanced features specifically designed to improve the performance of keyless chucks. “The two series were created to solve a particular problem,” comments Eric Elsmore, Jacobs’ marketing product manager. “The combination of aggressive clutch mechanisms and more accessories used on power tools has increased the vibration a chuck is subjected to, and keyless chucks, when subjected to that high vibration, will open at some point, interrupting the drill’s performance.”

Jacobs Chuck’s Hammerlock™ mechanism was developed to address the problems associated with high vibration applications. “Hammerlock™ is a positive locking bearing that prevents the sleeve from opening,” Elsmore explains. “On the 500 Series™, we’ve also included an improved bite that yields a significant improvement in the grip over competitive chucks, called the serrated bite; and in addition, we’ve included an anti-lock feature which prevents the chuck from locking in the fully open position.

“The new 700 Series™ will have significantly higher wear resistance on the bite for an increased performance in hammer drilling applications,” Elsmore adds.

Jacobs’ third new product innovation is its QuickChange technology, which allows for easy bit change on power tools. All product introductions and advancements are competitive performance advantages and are evidence of Jacobs’ dedication and leadership in the industry.

The Key to Better Power Tools

The chuck is one of the inherent, yet most critical, features of any drill on the market today. Jacobs’ drill chucks are styled for a wide variety of consumer corded or cordless power drill applications, all designed to optimize operation. Significant Jacobs features include through-hardened and exposed jaws, a compact envelope, reduced outer diameter and ergonomically contoured sleeves for a superior oil- resistant positive gripping surface.

Jacobs’ technological breakthroughs contribute to end-user productivity, which will drive significant advancements and will lead to future advancements and higher performing drill chucks. After more than three generations of perfecting what some would call a rather specialized product line, Jacobs has managed to attain general household recognition as the leader in its field — becoming the No. 1 brand name in chucks.