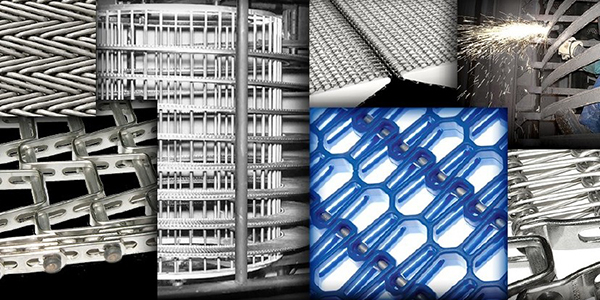 The next time you unwrap a cupcake or package of tortilla chips, you might want to give a nod to this company, a leading manufacturer of the conveyor belts that transport fresh-baked snack foods and bakery items throughout the production and shipping process. Meat and poultry companies also use this manufacturer’s conveyor belts. The company is the Belt Division of Winchester, Va.-based Ashworth Bros., Inc.

For more than 50 years, Ashworth has set industry standards for quality and performance by continually introducing innovative conveyor belts. The journey of products on Ashworth conveyor belts is a fascinating one, sometimes involving a trip of several thousand feet. It can take products through numerous processing stages, including preparation, baking, freezing and cooling, before they are packaged and shipped fresh to consumers.
Ashworth is an ISO 9000-registered,

global manufacturer of metal, plastic and hybrid-process conveyor belting. Product engineers work with Ashworth’s customers in order to determine the best belting configuration — one that will reduce product loss, increase throughput and minimize downtime. Ashworth is the only company offering all three types of belting commonly used in the processing of baked goods, snacks, meat and poultry, and bottles and cans. “We have a broad range of conveyor belting, including metal, plastic and hybrid belts, to suit the exact requirements of our customers,” says Jack Carothers, general manager.

Ahead of the Curve
“Our primary claim to fame is that Ashworth invented the Lotension system in addition to the turn-curve belts that work on these systems,” Carothers says. The Lotension system is a spiral conveyor-belting system, which is one of the predominate methods of transporting products in applications requiring freezing, proofing and cooling in bakery processes. One of the advantages of the spiral design is that it delivers a lot of conveying surface in a small space. Sometimes products have to spend a certain amount of “dwell time” in a freezer. “If you were running a linear conveyor, you would have to have a huge freezer to accommodate dwell time,” says Carothers.

Originally made of metal, Ashworth now offers Lotension hybrid belts, which are constructed of a metal skeleton with a plastic overlay. “These hybrid belts have all the advantages and strength of a steel skeleton with the additional benefits of plastic, all of which allows the easy release of product. Sometimes products tend to stick to a metal belt,” explains Carothers. Other advantages of the hybrid belts include ease of cleaning and the elimination of the black-speck wear debris caused when metal rubs against metal. Lotension systems are also used in high-temperature applications in which poultry is placed on conveyors that travel through very large cookers during processing.

Ashworth’s basic lines include its flat-wire family of products and its woven-belt products. In the flat-wire category, the Omniflex® straight-running belts are used in the manufacture of glass bottles and aluminum cans. The Omni-Grid® program of belt products is used in a wide variety of food-processing applications, including the freezing of meat, catfish and poultry; and the baking, proofing and cooling of bakery and snack products.
The company’s newest family of hybrid products includes Hybri-Flex® 150 and Hybri-GridTM 120. “The Hybri-Flex® product is used in Lotension systems and was developed to prevent black-speck metal debris,” notes Carothers. “These are typically very large belts used in large bakery applications, and some systems can be several thousand feet long.” Hybri-Flex® is very user-friendly and can easily be repaired in the field. This rugged system operates successfully in abrasive, abusive and extreme temperature conditions (from minus-58 degrees to plus-220 degrees Fahrenheit). It is available in spiral systems, demanding turn-curve applications and straight-run systems.

Hybri-GridTM 120 — the company’s newest hybrid — was developed to provide customers excellent solutions at an affordable price. “Its characteristics include its strength and easy cleanability. This product was designed to eliminate black-speck metal debris as well,” says Carothers. Hybri-Grid™ is available in widths from 16 to 54 inches. The plastic mesh provides exceptional product support while allowing open airflow.

Dynamic Lotension
“Since we invented the Lotension system, we know more about it than anyone else, and we continue to develop new products that work very well with these Lotension systems,” says Carothers. “This means we have a distinct advantage because we have the expertise as well as a large database of information.”

One of the company’s newest technologies allows it to manufacture the only non-welded grid belt in the industry. “We call it Fusion Grid®, which is a unique process creating strong and smooth bonds that eliminate contamination pockets and provide uniform edge finishes,” says Carothers. “The failure point on grid belts is typically the weld, so we’ve actually eliminated that failure point, which makes this product a stronger belt with a longer life.” By eliminating the standard weld, the Fusion Grid® belt is easier to clean and meets HACCP standards.

Ashworth has a long and rich heritage, with its beginnings in the 1860s in Manchester, England, where the Ashworth Brothers launched their entrepreneurial dreams. Since that time, the company has experienced numerous acquisitions and expansions. Today, the Belting Division operates a large manufacturing facility in the Netherlands, in addition to the 123,000 square-foot Virginia facility that employs 160 people. Now, nearly a century and a half later, Ashworth has its eye firmly fixed on a future of continued successes and innovations. “We intend to continue developing our hybrid family of belting for both Lotension and turn-curve applications,” says Carothers. “We intend to continue to be the technological leaders in developing new and innovative problem-solving belting. We will do this by continuing to work closely with our customers to learn what their problems are so we can help them solve those problems.”