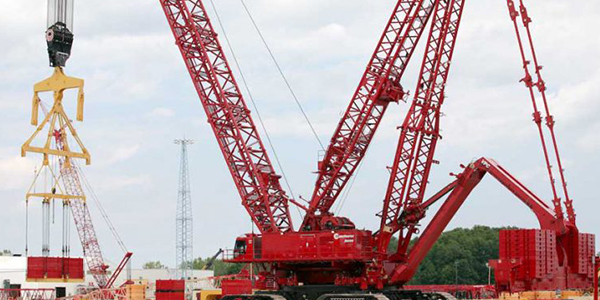 As innovation in the construction industry continually reaches new height, new models of Manitowac cranes and attachments are likewise developed annually to meet the challenge.“We are committed to introducing a new model at least every second year, and a new attachment in the intervening year,” explains Ron Schad, executive vice president and general manager of Wisconsin’s Manitowoc Cranes, Inc. How does such a level of commitment to innovation work for this customer-driven company?

Manitowoc earned its distinction by consistently understanding evolving industry trends and by setting industry standards in response to those emerging trends. One example was Manitowoc’s introduction in 1992 of the industry’s first large easily mobilized lattice-boom cranes. “The first easily mobilized model we built, the M-250, created a whole new market in mobilized lattice-boom cranes and really swept the industry,” says Schad. These new cranes no longer required large crews and another crane to assist in the lengthy on-site assembly previously required by large cranes.

Lattice-boom cranes have long been used in construction, but primarily on longer-term projects. “We saw that projects were becoming more time sensitive and that the industry was changing to a rental-based business. We were determined to make our cranes more easily mobilized in order to serve the construction industry’s changing needs,” says Schad.

Carrier-mounted cranes with telescoping booms began to erode market share from lattice-boom cranes because they were considered more mobile and they fit better in the crane rental business. However, crane users felt that, although those rubber-tired truck cranes were mobile, they had a big disadvantage on the job site. “Because the truck cranes needed outrigger support when lifting, they couldn’t walk and carry a load as could a lattice-boom crawler crane,” explains Schad. These telescopic cranes were getting larger in order to handle more demanding applications. “We knew we had to innovate quickly to offset the only advantage held by the truck crane – easy mobilization,” says Schad. With the introduction of the easily mobilized lattice-boom crane came a new direction in the construction industry, and modular construction of larger sections gained popularity. Construction jobs such as these are out of the scope of any crane other than a mobilized lattice-boom crane, which combines easy mobilization with the capability to lift large modular pieces, explains Schad.

Projects using these easily mobilized lattice-boom cranes include the construction of hotels, petrochemical and power plants, and for-profit prisons. The major sections of these buildings are built off site at fabrication facilities. “It all boils down to cost effectiveness,” says Mark Marzion, director of marketing. Manitowoc cranes have built many sports stadiums throughout the country, including the Bank One Ballpark in Phoenix, the MCI Center in Washington, D.C., the Broward County Arena near Fort Lauderdale, the New Orleans Sports Arena and the Cleveland Browns stadium in Cleveland. “Since more and more stadiums are built with pre-cast concrete and pre-assembled steel structures, they require our large easily mobilized lattice-boom cranes,” says Marzion.

Using Ideas As Their Maps
But this company does not sell its products in the traditional fashion. Manitowoc sells its products before they are even designed or manufactured. Using customers’ knowledge to guide product designs is paramount to Manitowoc. “We funnel all of that customer information into our marketing and engineering departments, thereby improving the product as we develop it. Our 21000 lattice-boom crawler crane is a good example of this,” says Schad. The company wanted the 1,000-ton-capacity Model 21000 to have an innovative eight-track system of crawler drive for ease of transportation and manufacturing efficiency. “Our customers, who had already bought this crane, told us that cranes of this capacity are typically so wide they are difficult to get into work areas of the projects they were designed to handle,” says Schad. A typical crane designed to make the largest lifts in a refinery or power plant is more than 41 feet wide – about 10 feet wider than the access ways. “So we began to think about configuring the 21000 with a width of about 30 feet so that it would be easier for customers to use. Our customers told us they didn’t think it could be done.” Manitowoc imbedded into that challenge as a requirement in the 21000’s design, and the company designed the crane with two configurations, a wide and a narrow. “We can fully assemble the crane, then travel it into a refinery down a 30-foot alleyway.”

The basic Model 21000 was introduced in March 1999. “We are just finishing the development of two attachments for that crane,” explains Schad. “Each of our cranes has a base configuration and attachments that increase its capacity and en- hance its capabilities.” Most of Manitowoc’s models have a luffing jib attachment that increases the crane’s lifting capacity for long reaches and tip heights. Used mostly in industrial, petrochemical and power plant applications so far, the Model 21000 also can be used effectively in fabrication yard and in large bridge or stadium construction.
The Model 777T, introduced in early 1999, is a 220-ton-capacity truck crane. “There are still many applications for which a truck crane on rubber is a better match,” says Marzion. “One positive aspect of truck cranes is that their rubber tires can travel on finished surfaces without marring them.” The 777T was designed to do pre-cast concrete tilt-up work in projects requiring medium-sized building construction such as warehouses, shopping centers and office complexes. With the tilt-up techniques, these buildings can be constructed in just a few days.

Customer-Driven Philosophy
“We are the trendsetters, and we see our competitors trying to copy our innovative features into their designs,” says Schad, who reports that the company’s major competitors are located in Germany and Japan. However, although imitation might be the highest form of flattery, Manitowoc designs cannot be fully duplicated because of the company’s numerous patents. “For example, in 1992, we patented a FACT™ connector that allows a Manitowoc crane’s boom to be assembled in one-fifth of the time of booms having other connectors,” Schad adds Manitowoc markets its cranes through a worldwide network of distributors. Its largest market segment includes large rental companies renting to construction contractors. The second-largest market segment encompasses major construction companies such as Bechtel and Granite, as well as major international construction companies. “We have the leading market share in China for 300-ton and larger lattice-boom cranes being used to build power and petrochemical plants,” says Schad.

But Manitowoc’s goal is not just to sell the most and the best cranes to build large and enduring structures; the company strives constantly to build enduring customer relationships. “We sell fewer than 300 cranes a year, so we maintain very close relationships with the companies we sell to,” says Schad. Manitowoc is proud of its customer-responsive philosophy, which encourages direct communication with its factory.

“We literally drive the market with new products,” says Schad. One of Manitowoc’s core competencies is its ability to deliver new products at least every two years; and statistical analyses of the company’s markets indicate that Manitowoc products actually create new markets. “For instance, the size of the world market for the cranes we introduce typically doubles or triples in size after we first market these new products,” continues Schad.

Manitowoc’s easily mobilized lattice-boom cranes have lifting capacities ranging from 80 to 1,433 tons. Its excavator capacities range from 20,000 to 50,000 pounds. The ISO-9001 certified company employs about 685 people in its 450,000-square-foot plant located on 100 acres, which also includes outside testing and storage areas. Revenues for cranes and related products in 1998 were about $330 million, and revenues for 1999 are expected to be $350 million. The company is a subsidiary of the Manitowoc Company, Inc. (NYSE:MTW), a 97-year-old diversified manufacturer that has two other business groups providing food-service equipment and shipbuilding and repair services.

Manitowoc has several recent orders, each over $10 million. A rental company in Canada will use nine Manitowoc cranes to build new refineries and petrochemical plants near the tar sands of Alberta. “The company, Sterling, anticipates a busy business cycle,” explains Schad. “One of their large customers needs to excavate the sand and cook it to get out the oil.” Another $10-million order is for a state-owned oil company in Algeria. “They will be constructing oil refineries with three of our cranes,” says Schad. Still another $10-million order is for cranes being used in repairing the recent hurricane damage to highways, bridges and buildings in the Southeast.

The company plans to be one of the world’s major suppliers of crane products and will continue to grow internally by expanding the product line. “We see we have a gap between our Model 222 100-ton and our Model 777 175-ton crawler cranes, and we will probably look at filling in that gap with a new crane. Externally, we share in our parent company’s desire to acquire or to create alliances with other manufacturers,” concludes Schad.