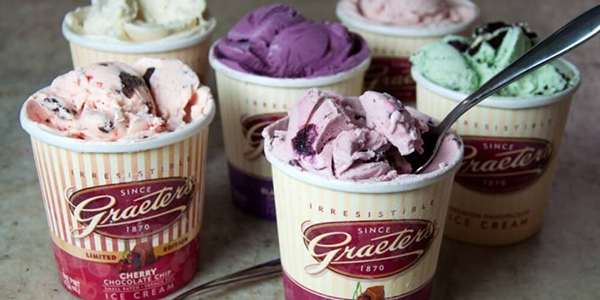 Regina Graeter was a woman ahead of her time. When she was widowed with two teen-aged sons to support after the death of her husband in 1918, she rolled up her sleeves and took charge of the family-run ice-cream business that had begun nearly 50 years before in Cincinnati. “Instead of falling apart or selling the business – which was one store at the time – she successfully ran the business, growing it to 20 stores within her lifetime,” says great-grandson Richard Graeter, executive vice president. “She did this during a time when women did not work outside the home, let alone run a company.”

That was just the beginning of the many challenges Regina faced during her lifetime. A little over a decade after losing her husband, the country was hit by the Great Depression. “We actually grew in a big way during these years,” continues Graeter. “In 1934, my great-grandmother Regina bought a bankrupt printing plant, which we are still located in today.” During World War II the company expanded again. “She was this powerhouse woman who continued to grow the family business even in the face of all of these things,” he adds.

“This is the critical difference between Graeter’s and every other ice cream available today,” says Graeter. “Even the super-duper high-premium ice cream manufacturers whip air into their products. Modern ice cream is what I call frozen foam and it’s really not ice cream at all.”

Critical to the French pot process is having the proper equipment that spins at just the right number of revolutions per minute – to keep out that air. The Graeter family devoted a lot of time and money to design just the right equipment, which is now custom-designed and manufactured by a local machine shop. “Before getting these new machines, we were using machines that were 80 years old, which were tinned copper bowls on the inside of cypress vats,” explains Graeter.

Heavyweight Champs
Most people might think ice cream is pretty much the same. But try weighing a pint of your favorite ice cream against a pint of Graeter’s. “Our pint weighs a pound – but other ice creams can weigh as little as eight ounces,” Graeter says. This is within the allowable limits of federal law, which permits ice cream manufacturers to produce what’s referred to as 100 percent overrun, which means the ice cream product can contain up to 50 percent air. “So ice-cream manufacturers can put in a gallon of liquid to get two gallons of what I call frozen foam,” says Graeter. “As far as we know, there is no ice cream on the market with less than 20 percent air – and Graeter’s has virtually zero.”

Back in the 1700s, ice cream was made using two pewter bowls – one with cream and sugar that nestled into another with salt and ice to bring the temperature of the ingredients down below zero. The cream and sugar continued to be stirred until ice cream formed. “The French pot freezer process used in the 1800s was similar to that, but with a bigger pot that spun around in a wooden vat of salt and ice and you could make a few gallons – but you still had to continually scrape the sides of the pot,” Graeter says.

Graeter’s has 12 French pot ice-cream machines in its 25,000-square-foot plant, where it produces 28 different flavors. Each batch takes about 20 minutes to produce; it takes another five minutes to remove and hand-pack the ice cream. “Even running a double shift I can maybe produce 1,000 gallons a day – whereas the modern ice cream machines do that amount in just a couple hours,” Graeter says, noting the most popular flavors are black raspberry chip and chocolate chip.

In the mid-1990s, the company produced a Web site, which increased orders by about 20 or 30 a day. Also during that time UPS started offering affordable next-day delivery on frozen products, so online business became popular for the company. But the real test for Graeter’s came when Oprah mentioned the extraordinary quality of the ice cream on one of her shows. “The day after, we did 400 a day!” says Graeter, adding the average daily online number of orders is about 70. The company has also been featured in USA Today, The Wall Street Journal, and The New York Times. “Ben Cohen of Ben & Jerry’s named us number one of the top 10 ice-cream companies in the country,” Graeter says.

Dedicated to Heritage
Today, Graeter’s operates 12 retail stores in the Cincinnati area. “We deliver to them every day and the ice cream you eat in one of our stores today was made as little as just a few hours ago – it’s that fresh,” Graeter says. The company sells pints of Graeter’s ice cream in 25 of the 100 Kroger’s stores located in the greater Cincinnati area. Three Graeter’s franchises operate in local markets, where franchisees manufacture their own Graeter’s ice cream using the same French pot process. About 60 people work in the main plant and another 350 work in Graeter’s retail stores. “Many of these employees are kids in the Cincinnati area, whose first job is scooping ice cream in one of our stores,” Graeter says.

“We don’t aggressively sell franchises and approach it entirely different from other ice-cream franchises,” Graeter says. “We are not looking for rapid growth because our plan is to grow gradually from our regional area – even though most of the requests I get for franchises come from Florida and California. The model would be to have Graeter’s ice cream manufactured in the location where the retail store will be. This is another difference between Graeter’s ice cream and other ice-cream franchises – making mediocre ice cream on your premises doesn’t mean it will be better because it’s made while your customers watch. Our model is very different in that our ice cream will always be made fresh daily in the old-fashioned French pot process and we sell our ice cream in friendly, family environments – that is what we are all about.”

Graeter’s retail stores are contemporary versions of ice-cream parlors of 1890s vintage, says Graeter. Ice-cream fountains are made of cherry wood fronts with marble countertops. Floors are tiled and customers can enjoy their Graeter’s ice cream at small, cozy round tables and sweetheart chairs. “Customers cannot see our ice creams, as was the fashion in the old drug stores where you sat at a bar and asked for a scoop of your favorite ice cream and the attendant lifted a stainless steel door and scooped out your cone for you,” Graeter says. Graeter’s makes all of the syrups by hand and still offers a nectar soda popular about 100 years ago – made of milk, sugar and bitter almond extract.

Melting the Competition
As for trends in the industry, Graeter says when the company began in 1870, just about all four or so of the ice-cream retailers in the neighborhood made ice cream the old-fashioned way. “Once modern refrigeration came into the picture, bigger companies began producing ice cream in the modern way and the little guys fell away,” Graeter says. “But my great-grandmother held in there making ice cream the right way.”

After World War II, soft-serve ice cream became the rage – and Graeter’s didn’t budge from its French pot process. “Then the frozen yogurt craze hit us and they were everywhere – but today most of them have disappeared and we still held right in there,” Graeter says. “The next big thing was Haagen-Dazs during the early 90s, which was a very good thing for us because Haagen-Dazs raised the awareness level for premium ice cream. It was made with better ingredients and lower overrun, but it was not made using the French pot freezer process. But as the popularity of super-premium ice cream grew and the more they advertised their products, the better off we were during those years.”

By staying true to its vision of producing only the very best ice cream, Graeter’s managed to persevere successfully. “We did not try to adapt and change every time a new trend came along; my partners Chip and Bob, who are my cousins, and I are custodians to a family heritage and the name ‘Graeter’s’ means quality,” Graeter says.

Graeter says the family-run business will continue to produce quality ice cream using the French pot process. “I don’t think anyone would ever want to replicate our process because it’s so time-consuming and low-volume so my profit margins are significantly less than other ice cream manufacturers,” Graeter says. “I see us as a tiny niche player that does something good in a very peculiar way – and the only way you get companies like ours to succeed is when it’s a family-run business because we are motivated to do something we are proud to do while keeping our long heritage alive and thriving.”