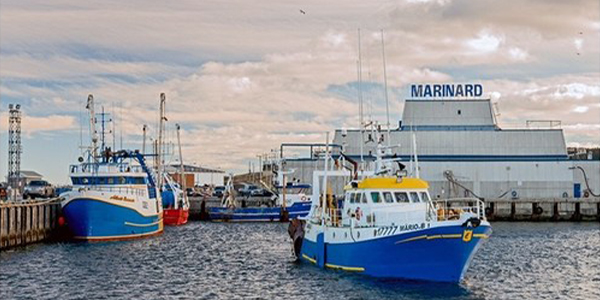 These days, consumers who prefer to eat foods that are healthy for them are concerned about the healthfulness of what they consume. Food that is overly processed or is artificially produced is sometimes viewed with suspicion. More “natural” food is not only perceived as safer, but better tasting.

This small shellfish is called Nordic Shrimp (Pandalus Borealis). It lives in cold water, has a long and frayed body, and can reach an average of eight to 12 centimeters in length (three to five inches). Nordic Shrimp has a pink color on the surface, but is white inside. It is sold by Marinard to many countries in the form of cooked and peeled and individually quick frozen (IQF). The product size is generally available in four to five pound bags or bulk 20-pound sizes.

According to Pépin, “While the current trend is towards warm water shrimp, mainly because it is less expensive, there are distinct taste and health advantages to our cold water shrimp. Because Nordic Shrimp can only be caught in the wild, they have not been exposed to chemical products or antibiotics. The Nordic Shrimp is found in the wild only and cannot be farmed. The taste of Nordic Shrimp is sweet, refined and the texture is tender.”

This distinctive taste is further assured by its freshness,which begins with what Pépin terms, “traceability from the sea to the table.”

The company has a fleet of about 20 trawlers that go out to sea in the Gulf of St. Lawrence for only three or four days at a time. The trawlers employ small grid panels, called “NordMore,” that are specifically designed to greatly reduce catches of other species such as ground fishes (Cod, Ocean perch, etc). “This eliminates time consuming manual segregation while preserving the ecologies of other species,” Pépin says.

While the company sales office is in Montreal, Quebec, the headquarters and processing plant is located in Rivière-au-Renard, a village in the Gaspé Peninsula, nestled between the mountains and the sea and very close to the fishing zones. “The trawlers unload at the wharf and the catch goes immediately to the processing plant, Proximity of the unloading wharf to the processing plant makes it possible to produce a product with impeccable freshness,” Pépin explains. “Our brand is recognized internationally for its high quality and unique taste.”

To that end, the 250 employees of Marinard strive to maintain the strictest bacteriological controls. “Total segregation between the zone of cooking and the zone of processing, including freezing area, makes it possible to reduce the propagation of bacteria,” Pépin explains. “Our system of segregations is why Marinard shrimp is approved for use in the major Canadian and European food chains. In addition, a documented bacteriological control of TVC, coliforms, e-coli, enterroccocus, salmonella and listeria) is performed by a qualified technician on all finished product.”

The plant is HACCP (Hazard Analysis and Critical Control Point) approved by the Canadian Food Inspection Agency. This certifies a systematic approach to identifying and controlling microbiological, chemical or physical hazards that pose a danger to the preparation of safe food. It also has EFSIS/BRC (European Food Safety Inspection Service/British Retail Consortium) certificate of conformity accreditation. These accreditations are required by the consumers and retail food chains.

Pépin points out that the company is expecting the Marine Stewardship Council (MSC) accreditation by November. The MSC standard was developed in response to dangerous and destructive practices of over fishing. MSC approval on product labeling ensures consumers that the product has been fished in an environmentally responsible and sustainable manner.

Marinard also has an agreement with Agro & Agriculture Canada to use the image of Branding Canada on its packaging and promotion material. The Branding Canada label is intended to establish and promote the reputation of Canadian fish processors, “The branding emphasizes that the product originates from cold water, is safe and of high quality, produced in a sound and healthy environment,” Pépin says.

In 1996, Marinard established a research center and aquaculture site at Gaspé Bay. While the aquaculture center farms arctic char and brook trout in some 30 tanks, the research center transforms residues of its production process, mainly shrimp exoskeletons, into chitosan, which has a number of medical, pharmaceutical and other commercial uses. These include plant growth food, filtration materials, and even blood clotting and weight loss applications.

Exceptional taste and quality notwithstanding, Marinard faces several challenges, particularly in overseas markets. According to the Canadian government’s Fisheries and Oceans department, “the 20 per cent European Union (EU) tariff on cooked and peeled shrimp was at the heart of current difficulties facing Canada’s East Coast shrimp industry.”

Pépin notes, “Because of the tariff situation, for the past four years the available offer of Nordic Shrimp has exceeded demand. The strong value of Canadian currencies makes the situation even more difficult. Warm water shrimp, in contrast, has been growing in the last five years, and is lower in price, and many consumers are switching.”

Still, Pépin is optimistic that, in the end, good taste and responsible stewardship will win out. “There is always a segment that is willing to pay more for better taste, or at least a different kind of taste. At the same time, there is a growing consciousness among consumers for food that is healthier. Fish caught in the wild is generally considered healthier, and as more information about that is made available to consumers, the better for us. Tied into this is growing awareness of a company’s environmental practices. As a soon to be MSC certified fishery, we’ve been at the forefront of environmentally sustainable fishing practices that promote stable and productive local eco-systems. On those three counts – taste, health benefits, environmental responsibility – Marinard is an industry leader.”