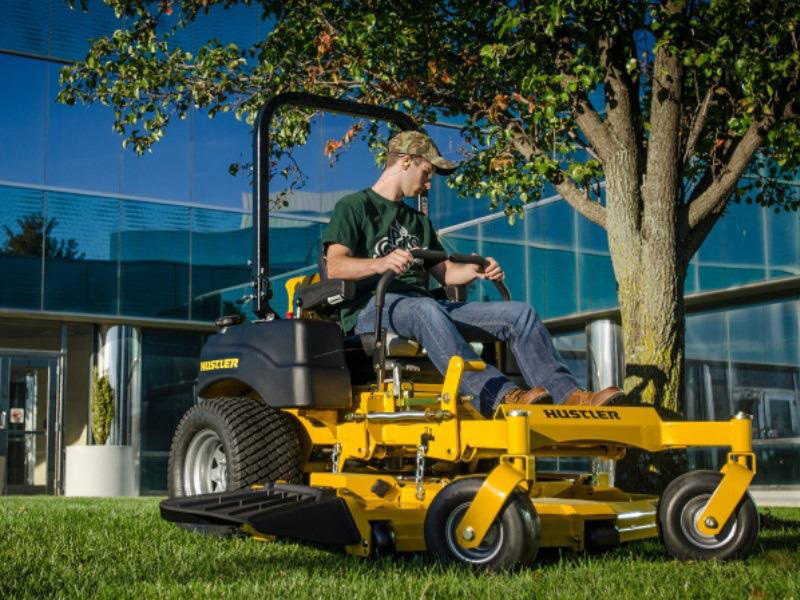 The Hustler line of turf maintenance equipment has a long-standing reputation for durability and productivity.

Innovativeness is not the only strong point of Excel Industries, Inc. But it is a strength that has sustained the Hesston, Kan.-based company for more than 40 years, and that has gained it recognition as a leader in the manufacture of commercial turf maintenance equipment.

Formerly Hesston Industries, Inc., Excel Industries was formed in January 1960. At the time, it produced cabs for combines and tractors. Farmers would tell Excel what kind of tractor they had, buy the appropriate cab, and install it themselves.

A few years later, tractor manufacturers started selling tractors with cabs, so Excel expanded to producing turf maintenance equipment. At this point, Excel established its course as an industry pioneer. In 1964, it introduced the Hustler — the first front-mount riding mower with drive wheel steering, which also allowed speedy mowing around obstacles and reduced backtracking.

The Hustler set the standard for all riding mowers. In 1966, Excel introduced the first commercial-duty tractor and mower deck with offset trim capability. Equipping ContractorsAs Excel expanded turf equipment production, it continued making cabs, building OEM cabs for industrial equipment. Several years ago, Excel cut back on cab producing when a major client, John Deere, began to insource some work as part of a labor union contract settlement. Knowing the company was going to lose this cab business, Excel’s management expanded the turf equipment business by targeting the landscape contractor market. Excel continued making lawn mowers that sell for $20,000 to $30,000; but, to reach the new market, it started offering smaller equipment, more suitable for contractor’s needs, and priced under $10,000.

The Hustler line has expanded over the years to include the ShortCut®, which is more compact than a comparable walk-behind mower; midmount models 251K and 260K; the Hustler 2500 midmount; 3000 series tractors; the 4000 series front-deck mowers; and the 6400 Hillsider. Hustler innovations develop in response to market needs, some coming from customers themselves. The Hustler StumpCut’R™ is a recent example of Excel’s ability to recognize ingenuity. Mike Nissley of Tallahassee, whose business is tree-stump removal, brought to Excel his idea of mounting a stump cutter on a zero-turning-radius tractor. Excel mounted the stump cutter on Hustler 3000 and 4000 series tractors, thereby overcoming the difficulty and slowness of using other types of cutters.

All of Excel’s innovations are geared toward improving productivity. Excel was first to make lawn mowers with attachments for various tasks in addition to mowing, such as picking up grass and leaves and moving snow.

“Innovations have been one of our driving forces” says Ken Raney, advertising manager, “but another strong point is we make our stuff tough.” Excel gained its reputation for durability by making decks with thick welded steel. With two lasers, employees cut and form all steel parts, doing all welding by hand; Excel has no robot welding. The company gained its expertise with steel and tubing through the manufacture of cabs. “One of our claims to fame over the years,” says Raney, “has been the way we bend tubing to minimize the buckling that occurs on the inside of the bend.”

One of Excel’s most recently introduced products, the Hydro WalkBehind, demonstrates the company’s three strong points. The Walk-Behind is durable because it’s built with much stronger, thicker steel with better reinforcement than competing products. It features reinforced, 3/16-inch welded steel construction throughout, with formed doublers at key wear points, and H-Bar™ steering. Most other walk-behind mowers have a pistol grip—handgrips with several levers and other devices. Workers’ hands and arms get tired from using these mowers, so they have to take breaks and they usually don’t do much trimming. Instead, to keep flexing of the hands to a minimum, they mow through the middle of the yard in a straight line, turn around, and go back. Then with weed eaters or a small, 21-inch walk-behind mower, they do the trimming. With the easier-to-use H-Bar™ steering, workers can mow at a higher rate of speed and are more likely to use the WalkBehind for trimming, thereby saving time as well as effort. Another advantage of the H-Bar™ handle is simplicity, which lowers the learning curve. The pistol grip, on the other hand, with its levers and other devices, can intimidate users and usually takes a week to master.

Excel sells its products through direct dealer arrangements, and works with several commissioned representatives to sign up new dealers. In the last year, the number of dealers has increased from about 75 to 170.

In addition to selling through local dealers throughout the United States., Excel has a GSA contract with the federal government and national accounts with organizations such as ServiceMaster and SCI, the cemetery chain. At present, 95 percent of Excel’s business is in the United States, but it does have a presence in France, Spain, Italy, the United Kingdom, Australia, New Zealand and South Africa. Excel’s bigger diesel equipment has been selling overseas for many years and accounts for 5 percent of its total business. With its ShortCut® and WalkBehind mowers and its gasoline air-cooled engines, Excel is making greater inroads internationally in a market that once wanted diesel engine products almost exclusively.

All Excel products are made in Hesston, where about 170 employees work in the plant. Vendors provide engines, hydraulic parts, seats and other components.

In its mission statement, Excel cites its 1964 introduction of “the first lever-steer, true zero-degree turning lawn mower” and claims, “Since that time, Hustler commercial Turf Equipment has won the reputation of being the most innovative, the most productive and most durable turf equipment money can buy.” This spring, Excel will introduce a new rough-cutter, the Hustler Hog™, which promises to sustain that reputation. In any event, Excel’s history demonstrates its ability to respond to market needs with inventions, as well as its ability to re-invent itself, when necessary. Those abilities should keep the company growing and moving forward.