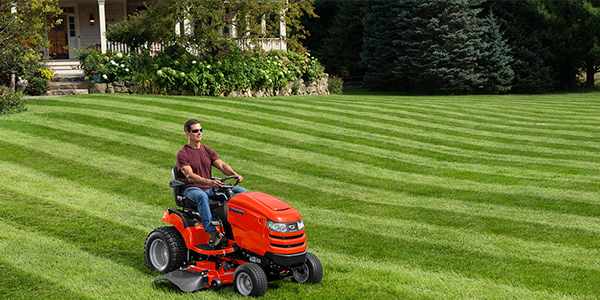 According to the Outdoor Power Equipment Institute (OPEI): “The idea of lawn care probably started with sheep. Mechanical mowing came about early in the 19th century. By 1885, America was building 50,000 lawnmowers a year.” Today, there are some 6.2 million powered walk-behind mowers grooming lawns throughout the U.S.; however a growing segment is riding mowers, which OPEI estimates will reach 1.9 million domestically in 2005. “It’s a fairly mature market,” says Harold Redman, senior vice president of sales, marketing and product management for Simplicity, headquartered in Port Washington, Wis., with 1,200 employees. “But it is an opportunity for growth every year for a number of reasons. One, consumers in general have more disposable income, some of which goes towards lawn and garden equipment. Secondly, the baby boomer generation is getting older, many of whom have first and second homes, and the ease and convenience of a riding mower is more attractive. There’s also been a housing boom, and of course as the number of new family homes and resales of existing homes rise, so do the number of lawns that need tending. So while our sales aren’t necessarily reaching double-digit growth numbers, they are rising steadily. Overall, we’re expecting that to remain the trend.”
In particular, Redman notes the rise of homeowner interest in “zero-turn” mowers, which are ideal for working in tight spaces around shrubbery and landscaping, a technology that until recently was targeted at the professional landscaper market. “Because we also make commercial-grade mowers and equipment, it’s relatively easy for us to manufacture consumer versions,” he says.

The Easy Way is the Simple Way
Indeed, “easy” is implied in the company’s very name of Simplicity. It was founded in 1922 by William J. Niederkorn to make a portable boring and grinding machine for reconditioning automobile engines. Niederkorn was in the right time: As America moved into the modern industrial age of the 20th century, walk-behind reel mowers were responsible for keeping its neighborhoods neat and attractive. When these neighborhoods turned into sprawling suburbs gas and electric powered lawnmowers gave rise to a new era of lawn care.

When the auto industry started rebuilding engines to sell directly to car and truck owners, the company repositioned in 1937 to sell two-wheel walking tractors for Montgomery Ward & Company, which eventually grew into an entire line of Simplicity lawn and garden equipment. In 1971 the company began making commercial tractors. During the next 25-plus years, Simplicity would introduce a host of new products including a chipper shredder, a walk-behind chipper vacuum, a front-cut/rear-steer lawn tractor, a rear tine tiller, and the first models in its Legacy garden tractor and Broadmoor lawn tractor lines. In 1999, Simplicity acquired Ferris Industries, Inc., a New York-based manufacturer of professional turf care machinery. At the end of 2000, Simplicity acquired Giant-Vac Inc., the outdoor power equipment industry’s leading supplier of leaf and debris handling equipment. Two years later, it bought Snapper, Inc., a Georgia-based lawn and garden equipment manufacturer. In June 2004, Simplicity was purchased by Briggs & Stratton Power Products Group, LLC, the world’s largest producer of air-cooled gasoline engines for outdoor power equipment. “The new relationship with Briggs & Stratton works well for us in a couple respects,” Redman says. “For one, we can combine our engineering expertise and manufacturing capabilities to deliver greater value to our customers. Secondly, we can leverage the purchasing power of our companies together to remain competitive.

It’s Really Quite Simple
While Simplicity’s history is not a simple story, its marketing philosophy is simply stated: make the best cutting tractors that provide long-lasting value. “We’re not the least expensive tractor in the market,” Redman points out. “We offer a premium product, equivalent to a John Deere or Kubota, that offers more value, that’s built better with more options and longer useful life expectancy – some of our tractors have been in use for 40 years – than what you’ll find in a Lowe’s or a Home Depot or other box store. For our customers, price is fifth down in the list after quality, longevity, value and ease-of-use. You can go into a big box store and find a basic tractor for $1,500, while a comparable model from us might cost $3,000. The difference is that a Simplicity tractor is going to last longer with fewer problems, and make your lawn more beautiful.

He adds, “In fact, when we acquired Snapper, we also acquired a relationship with Wal-Mart that we had to discontinue. It’s not that we didn’t have a good relationship. Certainly Wal-Mart is a great retailer. However, their broad-based target market isn’t ours. The big box customer is primarily interested in price. Our customers are a little different.” Instead, Simplicity relies on a nationwide network of over 9,000 independent dealers and distributors. Says Redman, “This is the right blueprint for us because it’s the best way to develop long-term customer relationships. It’s sort of like the difference between buying a standard tube TV and a plasma television. If you’re just looking for a basic TV, you go into the store, find the one you like and go to the cash register. If you want a plasma television, you probably need to consult with a salesperson who’s got the expertise to explain the features and functions and help you decide what you need and what you don’t. For Simplicity, the independent dealer is more knowledgeable about our equipment, is better able to service it – which is particularly important given that our products have a long life cycle and require periodic servicing and parts replacement – and is able to educate the customer about the feature and functional differences we offer that result in a better cut lawn.”

The proof is provided by Simplicity’s Free Floating™ mower deck capable of precision cuts that duplicate the lawn striping patterns of professional sports fields. (In fact, Simplicity mowers are used by the field management crew at a couple of big league baseball parks.) The Free Floating mower pivots left to right as it rides on full-width rollers, allowing the mower to follow the contours of the yard for the smoothest, most exacting cut possible. In addition, super-sharp tempered-steel blades actually help the grass stay greener by surgically slicing grass blades rather than simply “tearing” them. Technology
like the Free Floating mower makes Simplicity the recognized choice for a market segment that Redman describes as “people who not only want a better looking lawn, but actually like mowing their own lawn.”

With the Snapper brand, it’s all about ease-of-use. Simplicity has entered into a two-year agreement with NFL quarterback Brett Favre to put a face on the brand. Says Redman, “Favre is the third most recognized sports figure in the country, and his easy going, hardworking, get-the-job done personality really represents what consumers expect from the Snapper brand.”

Marketing Simplicity
In the power equipment segment, the company offers three driving brands: Simplicity, Snapper and Ferris. Simplicity is aimed primarily at the homeowner, though at the higher end it offers commercial-grade tractors such as zero turns. “Simplicity is noted for its attractive steel look in addition to the quality Briggs & Stratton engines with plenty of horsepower to do the job. Certain models can accept attachments such as dozer blades, snow throwers, front end loaders, and backhoes,” Redman points out. Many models also have four-wheel drive, power steering, cruise control, tilt wheel and automatic traction systems.

Ferris is aimed at the commercial market. “There’s less emphasis on cosmetics and more on innovation and durability – more steel goes into their manufacture. Also, the production runs are lower compared with the high volumes we do on the consumer side,” Redman says. Ferris targets the premium user in this market with features like IS® Independent Suspension, the first and only independent suspension system available for commercial ride-on products.

Snapper targets the mid-priced, high-quality end of the market, with value features but the same quality in durability and engines. It’s also a nameplate that will be used for the company’s new line of general utility vehicles. Each line is manufactured in one of three locations: Simplicity at a 400,000-square-foot plant in Port Washington; Snapper at a 450,000-square-foot facility in McDonough Ga., and Ferris at a plant comprising 150,000 square feet in Munnsville, N.Y. The facilities include stamping, machining, welding, paint, assembly, and warehouse capabilities.

Redman emphasizes that the use of shared chassis, engines and other components among the three facilities reduces total manufacturing expenses while improving overall efficiencies. He also points out that lean manufacturing and Kaizen principles are also key to optimum plant operations. In addition, manufacturing facilities are being continually improved and modernized. “Current technology provides the flexibility for the company to build a mix of products each day, and quickly respond to changing consumer demands,” he says. “We have engineering teams at each facility working with CAD systems equivalent to what’s used in the automotive industry to ensure a quality product, both in terms of design and performance.” For new product design, Redman says it takes anywhere from 18 to 24 months to work from the ground up, from design, prototype and into production. Each facility also has its own “proving grounds.” Port Washington, for example, has 40 acres devoted to seeing if the machines can make the cut. “In Georgia there’s a lot of sand and clay, so there we have the opportunity to test our vehicles under less than optimum conditions,” he adds.

Steeling for the Future
According to The Wall Street Journal, the spot price of steel plate increased as much as 106 percent in 2004, by far the highest price hike of any commodity or energy product. (For comparison purposes, the next leading price rise was lead at about 40 percent, followed by copper at about 37 percent.) Not surprisingly, given the quantity of steel required to make a tractor, that’s certainly affected Simplicity. Redman says the company has had to increase prices at retail, but continues to remain very competitive. “Again, price is not the primary purchasing decision. It’s value. With the innovations we offer, range of convenience features, and model selection, along with the superior results achieved in a well-cut lawn, supported by an exclusive and knowledgeable dealer network, we remain highly optimistic about the future.”

Simply put, the company is sharp enough to remain at the cutting-edge, which Redman believes is more than enough to run circles around the competition.