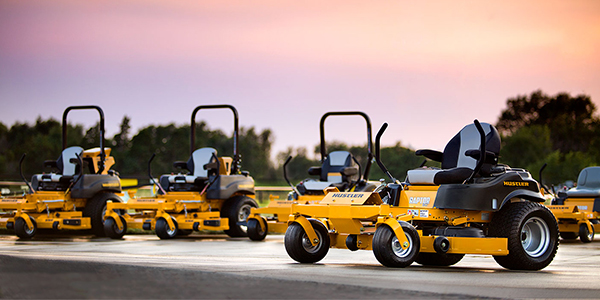 Ken Raney, advertising manager at Hustler Turf Equipment, leading designer and maker of premium lawnmowers for residential and commercial use, knows his grass, so if you’re asking, he can tell you a thing or two about people in regions of the country and how they mow their lawns. For example: in Kansas, where Hustler is based, the K31 fescue grass is mowed at 3 1/2 inches high; in Florida, a state with a variety of grasses the height varies, St. Augustine mows at five inches high. In California almost everyone uses a catcher or a mulcher and in the Northeast, don’t even think of selling a lawnmower without a bagger.

What Raney would really like to talk about is how Hustler Turf’s lines of mowers, known for their innovation, ease of use, and durability, can cut all of these grasses and can make it fun at the same time. The company is famed for its development of the zero-turn mower, which it claims could be “the single most important event in the history of landscape maintenance.” This historic occurrence took place in 1963 as the Hustler Web site relates: “Just before midnight on a spring evening in the year John F. Kennedy was assassinated, an odd-looking machine cut grass in a backyard in Moundridge, Kansas. The mower was not especially large nor particularly powerful, but it could turn, as they say, on a dime. In fact, it could reverse directions, 180 degrees, in an instant. A turn with a radius of, exactly, zero degrees; a turn completed within the length of the mower itself.”

The zero-turn mower, the narrative continues, “was born in the agile mind of John Regier, a tinkerer of the first rank who found his inspiration in necessity. With his wife in open revolt over her grass-cutting responsibilities on the Regier home site, he adapted a design for a steering system and transmission first used on haying equipment a decade earlier. He named his invention the “Workhorse,” a reference perhaps both to the mower’s and Mrs. Regier’s propensity for hard labor. And perhaps because John Regier had no formal education in engineering or industrial design, his employer (the patent-holder on his hay-swather model) showed no interest whatsoever in the new-fangled mower. He promptly resigned his position and set to work putting a 36-inch zero-turn mower into production.”

Regier built 24 of his mowers, which he rechristened the “Hustler,” a name belonging to the B-58 fighter-bomber he found in the pages of Popular Science magazine. Coincidentally, in nearby Hesston, Kan., Roy Mullet and his partners at Excel Industries, Inc. were busy building tractor cabs, but looking to diversify. Impressed with Regier’s design Excel quickly threw its manufacturing capacities behind the new mower after deciding that, with all the price sensitivities of the homeowner landscape market, only a larger, commercial-grade machine seemed viable. And so the first Hustler rolled off the assembly line with 65 inches of cut behind a 12-horsepower engine. Initial acceptance among turf professionals proved solid, according to the Web site. “The mower’s first customers welcomed the Hustler’s maneuverability. They applauded the mower’s ease of handling. They appreciated its immediate contributions to productivity.”

Do the Hustle
With Excel maintaining its role as the manufacturer and Hustler the sales arm, the company still enjoys green pastures as it unveils newer and tougher vehicles. “Zero turn radius has taken over the contractor market because it is a more efficient machine,” relates Raney. Initially, not a lot of homeowners were eager to buy these mowers because of the cost; however, in the last five years, as prices have become more reasonable for homeowners, more of these zero turn machines are selling in the residential market. “We’ve seen a huge upswing in zero turns,” he relates. “On the commercial end speed is always an issue, but now the homeowner can gain the productivity of zero-turning-radius mowing.”

Among the many advances the company has made in the lawn mowing industry is the XR-7™ mowing platform on the Hustler Super Z™, described as “the finest mowing deck ever put into the grass.” The XR-7 deck will mow in any condition, any time of day and provide the finest finished appearance every time. To bring about this innovation the company spent more than two years testing these new decks in every season, every condition, every grass type, and every part of the country where grass is mowed.

“You don’t always have the perfect condition when you mow,” Raney says. “If you have a lot of rain and the grass is wet it gets sticky and balls up under machine. That’s the worse condition possible. If you’re a commercial mower you have to go back and cut again.” The XR-7 offers patent-applied-for “FreeFlow™” triangles that greatly improve the flow of material under the deck, so you don’t get balls of grass, which gives it the ability to mow in different conditions. The front of the deck is adjustable for height, and blades can be set low for a cleaner cut.

The Super Z itself is a tried and true masterpiece in the Hustler line, a machine that allows speeds of up to 15 mph, for people who like to go fast and for commercial users who need a big piece of property done quickly so they can move on to the next job. “We knew at that speed, the hydraulics might get hot; we needed an oil cooler so we put on a spoiler for the cooler and a scoop for the fan.”

As it turns out (no pun intended) the Super Z accounts for a huge percentage of Hustler’s sales, proving that the need for speed and endurance is chief among the lawn-mowing public.

With an extremely wide footprint, the lowest seat height in the industry, and idealized placement of weight over the drive tires, Hustler Zs & Super Zs deliver superb machine balance, resulting in improved traction and exceptionally responsive handling. In fact, the new Hustler Zs & Super Zs handle better on slopes than any other midmount rider.

Features include:
• Lifetime warranties on the tractor frame and the leading edge of the deck
• Hydraulic hoses and fittings are guaranteed to never leak
• 3-year warranties on the blade-spindle bearings and front caster-wheel bearings
• Seat and steering levers are adjustable to guarantee a perfect fit for nearly any operator
• Very high blade-tip speed for superior quality of cut and ideal distribution of clippings
• Cutting heights from one to five inches in quarter-inch increments.
• One-inch spindle shaft for maximized durability
• Oil cooler with cooling fan on the Super Z

Other products in the Hustler lineup include the FasTrak, a homeowner mower with the same zero-turn performance that sells for considerably less than its Hustler siblings. The Mini FasTrak, has a smaller cut deck – 36- and 42-inch – made for people who have up to one acre to mow, while the FasTrak is good for one to five acres. In terms of its conveniences, the FasTrak is operator-friendly, comfortable in a way that only mowers meant for all-day, everyday use can be. It offers SmoothTrak™ steering, easy-to-use controls; a sturdy, cushioned seat with a 21-inch backrest and standard armrests; 18-inch drive tires and 11-inch caster tires for a soft ride; adjustable (fore/aft, up/down) steering levers for ideal positioning, and large, easily reachable cupholders.

Another premier product is the TrimStar, a hydro walk-behind that steers like a motorcycle, Raney says, because of pistol grip steering. “Traditionally these mowers have a ton of levers – they’re hard to learn and hard on a person’s hands.” Indeed, the company’s patented H-Bar™ Plus steering system gives the effect of the mower gliding over the lawn effortlessly. The Hustler Roll-On™ striping sulky also helps to create beautiful ballfield-style striping. In addition the TrimStar Hydro is priced lower than competitive hydrostatic, floating-deck units for a tremendous value in the commercial mowing market. The newly designed, full-floating decks offer the highest-quality cut and finished appearance on the market.

Room to grow
Based in Hesston, Kan., Hustler has witnessed stellar growth, precipitating the addition of a 40,000-square-foot building that houses a new state-of-the-art powder-coat paint system.

Growing at more than 30 percent a year for the past six years, it’s hard to believe that Hustler was almost a thing of the past not too long ago. “We started out manufacturing cabs for farm tractors: farmers would call us and we’d design a cab for them and put it on the tractor. Then tractor manufacturers decided there was a market for cabs and made their own and we began building cabs for OEMs. Deere was 65 percent of the business and was going to pull out so we decided to get serious about turf. That was right before the Hustler Z. Things were looking pretty bleak until the Hustler Z came out.”

Now exporting all over the world (it’s biggest market outside the U.S. is Australia) Hustler Turf has built a solid reputation for building machines equally as solid. Proof of this is in how many of the original Hustlers are still around, faithfully cutting grass 40-plus years after their invention. “We have a few people who have told us they still have one of the first zero turns and someone has told us they are still mowing with their original Hustler 36,” Raney says. For many more years Hustler will be a familiar machine mowing the lawns in America and abroad.