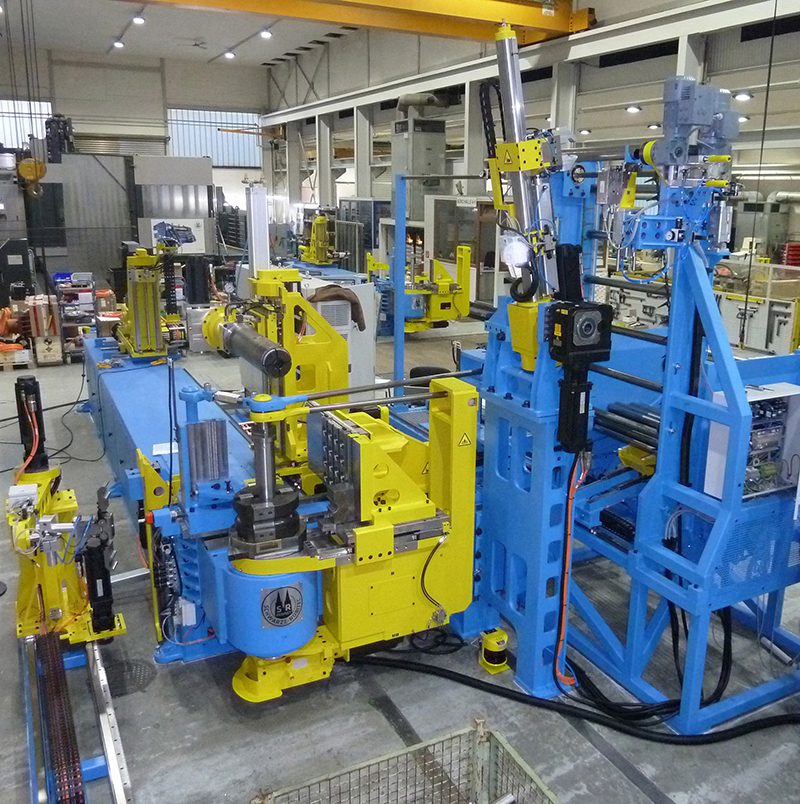 In order to increase the quality of their products and reduce costs at the same time, the Canadian supplier Deco Automotive replaces three existing older bending machines with three state-of-the-art automatic CNC 100 E TB MR VA pipe bending lines by Schwarze-Robitec. The company will profit from the integrated high-performance control system NxG by increasing its output and optimizing cycle times.

“Based on their own constant optimizing processes, our customers demand high requirements from their pre-products and with that, as supplier our requirements are also increased. In order to provide the customer with products in different versions and large quantities at a consistently high quality, we continuously invest in the further development of our production processes”, says Ray Metzner, Manufacturing Engineer at Deco Automotive. The company, headquartered in Toronto, Canada, belongs to the global Magna Group and manufactures various automotive components including vehicle frames and structures, and engine cradles. Among the customers of the automotive supplier are international original equipment manufacturers. Deco uses a total of four production lines and manufactures more than 1,750,000 products per year.

Due to the continuously high demand and a high annual output, Deco Automotive is dependent on reliable and intelligent pipe bending machines, which provide excellent results in terms of degree of automation, precision, speed, and bending processes. Before being accepted by automobile manufacturers, steel pipes run through the fully automatic cold bending process at the production facility in Toronto. Subsequent manufacturing steps include hydroforming, laser cutting and welding. The number of bending processes performed at Deco reaches 12 million per year. Up until now, the automotive supplier reached this volume by using a total of nine bending machines spread over four production lines. Seven of the machines come from Schwarze-Robitec, whereby three pipe bending machines were already in use for more than 20 years. The reason for the replacement of the old equipment with three new CNC 100 E TB MR VA made by Schwarze-Robitec was for Deco, that the bending and handling process is ensured to continue reliably and efficiently. “In 20 years, we have purchased a total of 13 pipe bending machines from Schwarze-Robitec and we have come to appreciate the very high quality and durability of the machines. We value the high technical expertise of the employees and the comprehensive services, such as remote maintenance, and decided at the end of 2015 to continue the partnership”, says Mr. Metzner.

Following an extensive consultation and planning phase in cooperation with Deco Automotive in Canada, Schwarze-Robitec produced three pipe bending lines tailored to the requirements of the automotive supplier. “We expect the new bending cells to provide significantly improved production and anticipate to reach our production targets even faster”, says Mr. Metzner. Of the three CNC 100 E TB MR VA machines two machines are right- and one is left-bending. In addition, the multi-stack bending machines are equipped with a pipe magazine, a weld seam finding device, an automatic loading and a removal device. The electrically operated systems process round and oval tubes that are 2.8 m long and have a diameter of up to 76.2 mm including a wall thickness from 1.2 to 3 mm. The process is fully automated: The pipes to be processed are taken randomly from the tube magazine and fed to the integrated weld seam finding device. This device aligns the pipes in accordance with their weld seam position. Following the alignment, the pipe is passed on to the pipe bending machine. To do this, a mandrel is used which supports the tube on tight radii from the inside. A fully automatic loading arm then removes the finished bent tube from the machine and places it on a conveyor belt. From there, the tube continues to the hydroforming equipment. Another feature of the solution are the integrated raised, vertical travel routes. This allows pre-loading the pipe bending machine, while parallel to this function a finished bent tube is removed at another location.

Compared to the pipe bending line, which had been in operation at Deco until today, the new machines are equipped with the high-performance control system NxG. An advantage of the new control system are the significantly reduced non-productive times, as individual steps of the bending process were arranged synchronously. “With the NxG control system, it is possible to prepare the next step simultaneously to executing a machining operation. For example, while a pipe is supplied to the tool, the clamping functions close almost completely”, explains Bert Zorn, Managing Director at Schwarze-Robitec GmbH. “When the tube then reaches its target position, the tool is immediately ready for the next bending step – this allows users to shorten the cycle times and production objectives are reached more quickly”. In addition, a diagnostic and maintenance tool integrated into the control system minimizes downtimes. The intuitive operability, the high performance control system also contributes to an ergonomic and efficient way of working. “The pipe bending machines made by Schwarze-Robitec produce reliable, accurate, and high-quality products and yet the machines are easy to use for our staff”, says Mr. Metzner.

Due to the new automatic bending cells made by Schwarze-Robitec, the automotive supplier was able to optimize the cycle times and increase the production output of higher complex shapes and materials. “With the new pipe bending machines and the bending programs of the control system NxG, we have reduced cycle times significantly,” says Mr. Metzner. With this, the accuracy that the company produces and the repeatability of its equipment in the production process is outstanding. “The predecessors of our existing machines have been operating in multi-shift operation flawlessly for almost 20 years. In addition, we received continuous services from Schwarze-Robitec, from their engineers in Cologne, and the employees of the US subsidiary – for us, this is a win-win situation.”

The electrically operated systems process round and oval tubes that are 2.8 m long and have a diameter of up to 76.2 mm.

Deco profits from the integrated high-performance control system NxG by increasing its output and optimizing cycle times. The process is fully automated: The pipes to be processed are taken from the tube magazine and fed to the integrated weld seam finding device Roland SND 40.

Schwarze-Robitec GmbH – the company
The company, founded in 1903, is one of the leading international experts in the sector of tube bending machines. At its headquarters in Cologne, the specialist for cold bending machines currently employs 130 staff. The company is represented worldwide via long-term partner enterprises. Since 2015 Schwarze-Robitec has opened its own subsidiary in USA for customers in North America. The bending specialist already manufactured the world‘s first CNC-controlled tube bending machine back in 1977. To date, more than 2,700 machines have been sold – some of them have been used in production unrestrictedly for far more than 35 years. The Schwarze-Robitec product range includes, in addition to tube bending machines and bending tools, tube perforating machines, measuring stations, as well as solutions in the area of special machinery construction. The reference list of the tube bending expert includes, without exception, all renowned leading manufacturers from the automotive industry, energy sector as well as shipbuilding. Above and beyond that, the company solutions are employed in the aerospace sector as well as many other industries. Detailed information about Schwarze-Robitec can be found in the Internet at www.schwarze-robitec.com.