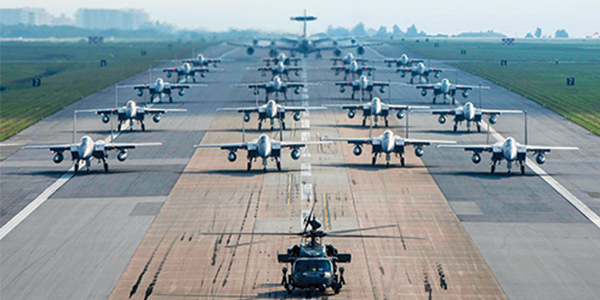 The industry supporting defense is reshaping itself to respond to significant changes in military missions. These changes may have negative impacts on certain U.S. suppliers. But, overall, U.S. defense systems lead the world, and the U.S. industry that develops and builds them continues to be the most technologically innovative, capable, and responsive in the world. Our military organization today bears little relation to that of World War II, Korea, or Vietnam. Nor should it. Nor should the industrial base supporting defense.
The industrial base from which the department procures is not overly consolidated and competition generally is sufficient to avoid stifling innovation and hurting the warfighter. Recent Defense Industrial Base Capabilities Studies assessed functional capabilities required to support 21st century warfighting and collectively identified over 2,000 distinct warfighting capabilities in which the U.S. military should maintain at least a one-generation lead over potential adversaries, as well as over 300 priority critical technologies and components supporting those warfighting capabilities. For these most important technologies, we identified about 1,000 companies with relevant industrial capabilities.

Regular assessments
Nevertheless, there are and will always be problem areas that the department must address. Each year the department provides a report to Congress summarizing industrial capabilities-related policies, assessments, and issues – and actions taken to address those issues.

DoD Components conduct assessments when: (1) there is an indication that industrial or technological capabilities associated with an industrial sector, subsector, or commodity important to a single DoD component could be lost; or (2) it is necessary to provide industrial capabilities information to help make specific programmatic decisions. For the most part, DoD Components address problems within individual programs as part of the normal acquisition process. Recent examples include temporary Army shortfalls in armor steel plate and small caliber ammunition; shipyard workload issues which the Navy is addressing within its DD(X) surface combatant program and Air Force concerns about the national security space industrial base resulting from stagnant commercial demand.

“DoD-wide” industrial assessments evaluate and address changes in key system, subsystem, component, and/or material providers that supply many programs, and affect competition, innovation, and/or product availability. The department has developed specific policies and structured procedures to make judgments about such broader industrial issues. Before taking extraordinary action and intervening in the marketplace, the department first verifies the war fighting utility of the industrial capability, that the industrial capability is unique and at risk, that there are no acceptable alternatives, and that the proposed action is the most cost- and mission-effective.

Also, the department recently took action to maintain a stable domestic industrial capability for high purity beryllium. Beryllium is a strategic material employed in a variety of critical defense systems including aircraft, missiles, satellites, and nuclear warheads. The department allocated $6 million in FY2006 to begin a project to establish a new domestic production facility for high purity beryllium metal. The department will address funding for additional years in its FY2007 Program Objective Memorandum.

Economic Outlook
The overall economic outlook for the U.S. aerospace/defense industry is positive. Aerospace sales in 2004 totaled $161 billion dollars, an increase of 8 percent over 2003’s $149 billion, according to Aerospace Industries Association (AIA). Net profitability also improved over 2003’s 4.1 percent, to 4.2 percent. AIA estimates that aerospace sales in 2005 will hit
$173 billion dollars, a 7.5 percent increase over 2004. It also expects profitability to increase, projecting 2005 net profit margin at 5.5 percent, a 24 percent increase over 2004.

In January 2004, the DoD report Study on Impact of Foreign Sourcing of Systems concluded that foreign suppliers provide limited amounts of material for the systems, and that using those foreign subcontractors does not impact the economic viability of the national technology and industrial base or long-term readiness. For the systems studied, foreign subcontracts collectively represented about 4 percent of the total contract value and less than 10 percent of the value of all subcontracts. The vast majority of the foreign sources are from NATO nations or other nations with whom the United States has enduring military and commercial relationships. Despite the very public opposition of some of the firm’s host nations to U.S. actions during operations in Afghanistan or Iraq, at no time did any of the foreign suppliers (including German and French suppliers) restrict the sale or provision of the components to the department because of U.S. military operations.

In fact, to improve access to the U.S. defense market, non-U.S. firms increasingly are investing in the United States. Overall foreign direct investment in the United States declined by 12 percent from the 1996-1999 to the 2000-2003 period. However, foreign direct investment in the U.S. defense and aerospace sector nearly tripled over the same period. Such investments “import” innovation and competition, increase U.S. employment, create higher paying U.S. jobs, and increase U.S. tax revenues.

Many U.S. industries once dominated by DoD demand now are appropriately focused on commercial markets. Examples include global commercial markets like information technology and integrated circuits where U.S. defense applications represent about 1 percent and 1-2 percent of the global market, respectively; and steel where direct DoD sales represent 0.4 percent of the U.S. market. While the department procures from these industry sectors, its influence is slight.

However, the department is embracing creative and flexible acquisition strategies to provide the warfighter with the best possible products. The industrial base on which the department draws its capabilities is global in potential, but still largely American.

It also is both technologically and financially capable of providing innovative solutions for current and future generations of warfighters.

Suzanne D. Patrick was appointed Deputy Under Secretary of Defense for Industrial Policy on July 9, 2001. In this position, she is responsible for all decisions regarding mergers and acquisitions (domestic and foreign) affecting the U.S. defense industry; the Department’s relations with NATO defense and aerospace industries; and the overall health of the U.S. defense industrial base. For information visit: www.acq.osd.mil.