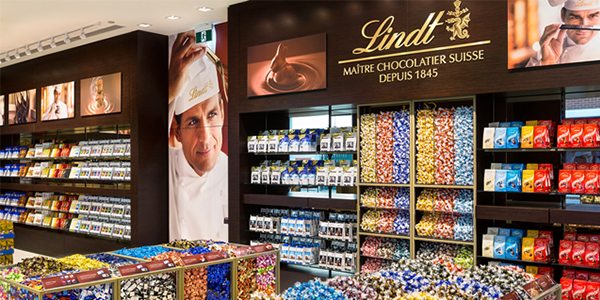 During the 159 years of Lindt & Sprüngli’s existence, the company has become known as one of the most innovative and creative in the premium chocolate market. Today, the company employs more than 6,000 people worldwide; its consolidated net sales in 2003 reached 1.8 billion Swiss Francs.

Two factors seem to have propelled the chocolatier to such astronomical heights. “Tradition and focus,” says Thomas Linemayr, president of Lindt & Sprüngli (USA) Inc. “Lindt is very passionate about chocolate making – it’s the only thing we do.

We don’t make cookies or ice cream in addition to our chocolate lines. For over 150 years, recipes have been created, collected, refined, proved, and old recipes have been mixed with new ones to create the incomparable Lindt chocolates. We also do the same with our production processes – we’re constantly recreating and refining. We’ve done this continuously and it is that combination that has contributed significantly to our longevity and measurable success.”

Lindt cuts no corners in its pursuit of creating the best quality chocolate available. And when it comes to jumping on the low-carb bandwagon taking the food industry by storm these days, Lindt just says no thank you. “We don’t really respond to that trend. We don’t believe in creating a low carb chocolate bar or chocolate confection of some kind that would compromise our quality,” says Linemayr. “We’re about the ultimate chocolate experience and indulgence.”

Candy Man Can
What is a chocolate mega force today was once just a simple father and son operation. In 1845, David Sprüngli-Schwarz and his inventive son, Rudolf Sprüngli-Ammann, owned a confectionery shop in Zurich’s Old Town. They decided they wanted to be the first ones in the German speaking part of Switzerland to manufacture chocolate in solid form. The company grew steadily and when Rudolf retired in 1892, he was considered an expert in his field and known for his reputation for producing quality products. He divided the business between his two sons. One received the two chocolate shops, the other the chocolate factory. The eldest, Johann, who had acquired the chocolate factory, was offered the option of also acquiring the small, but famous chocolate factory of Rodolphe Lindt. This daring step transferred not only the factory but also the manufacturing secrets and the Rodolphe Lindt brand name to the young Sprüngli company.

What made the acquisition so notable was that Rodolphe Lindt was the most famous chocolate-maker of his day. In 1879 he developed a technique by which he could manufacture chocolate that was superior to all others of that period in aroma and especially melting characteristics. Using the “conche” he had invented, he produced chocolate with a wonderfully delicate flavor and the melting quality we know and enjoy today. His “melting chocolate” soon achieved fame and contributed significantly to the worldwide reputation of Swiss chocolate.

In the first two decades of the 1900s, the Swiss chocolate industry enjoyed incredible expansion, especially in export markets. Lindt & Sprüngli played a powerful role in this boom, which persisted throughout the First World War. In 1915, the company exported some three quarters of its output to 20 different nations around the world.

The first building block for the establishment of an international group of companies was laid in 1977 with the acquisition of a majority stake in the French licensee CFC Consortium Francais de Confiserie. A further step in the company’s geographical expansion program aiming at the worldwide leadership position in the premium quality chocolate segment was the acquisitions in September 1997 of the tradition-enriched chocolate manufacturer Caffarel in Italy and in January 1998 of Ghirardelli

Chocolate Company in the U.S.
Due to the meteoric growth of the Lindt Group of Companies, the group’s structure was redesigned and a holding company was formed in 1994. Today, the group is comprised of manufacturing sites in Switzerland, Germany, France, Italy, the U.S. and Austria, with sales and distribution companies in England, Poland, Spain, Canada and Australia, and sales offices in Hong Kong and Dubai. Lindt & Sprüngli also markets its products via an extensive worldwide network of distributors.

Pleasing Premium Palates
Lindt is continually offering new products and recently introduced three new bars as well as a new “classic” box of Lindt chocolates. “We have a constant flow of new items,” says Linemayr. And it’s all about the ingredients and preparation that make each Lindt confection perfect in taste. For the chocolate masters at Lindt, chocolate making is an art. They preside over all the secrets and dedicate themselves fully with passion and devotion to the smallest detail.

Cocoa is where it begins. The Lindt masters know exactly which of the many cocoa bean types from Africa and South America contribute best to the typical fine Lindt taste. From the best cultivation areas of the world – Ecuador, Caribbean Islands, Madagascar or Ghana – they select premium beans of the highest quality. To develop the pleasing chocolate flavors, the cocoa beans must be roasted, a technique that must also be mastered. In particular, the Lindt chocolatiers use a special procedure, developed and patented by them in which they treat the beans with water vapor before cautiously roasting them at controlled temperatures in large drums.

Selecting raw materials and premium ingredients from chosen areas provide Lindt chocolate with its incomparable taste. “We select hazelnuts, for instance, from the freshest harvests, and once our chocolates are created pay strict attention to a short storage time with the best storage conditions at controlled temperatures,” says Linemayr.

Making it Melt
Today, chocolate has a melting quality that most of us love. But at one time, chocolate had a rough, almost sandy taste. The tender melting sensation consumers get from Lindt chocolates comes from the technology of Rodolphe Lindt to which the Lindt chocolatiers are still indebted some 100 years later.

Having carefully roasted the cocoa together with the other chocolate ingredients, the chocolate mass is refined on rollers, and intensively mixed and kneaded. The process, called “conching,” is where the naturally existing, undesired bitters substances are simply “aired out” and eventually subside. In addition, the smallest particles of all the ingredients are completely coated with the creamy soft cocoa butters, unfolding and developing the flavor. To achieve the shiny gloss of Lindt chocolate bars, particular care is taken in tempering the chocolate during the molding of the bars. With much love and detail, chocolatiers decorate chocolates by hand by adorning them with nuts and almonds or covering the exquisite fillings with fine chocolate. Chocolate bunnies are polished by hand.

“We are passionate and unyielding about our processes to guarantee the exquisite quality of Lindt even in the smallest piece of chocolate,” stresses Linemayr. “We’re proud to be premium and it permeates through all we do. From our chocolate making to being one of the only chocolate companies to do a national advertising launch of a product, Lindt is about being the finest.”