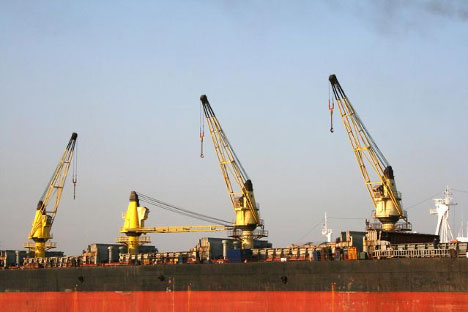 The right coatings can make the difference between a slow, rusted, unprofitable ship, and a fast, smooth, money making one.

Nearly every surface on a ship is under constant attack, by everything from acidic cargo spillage, to simple seawater, to various unsavory microbes. Without intervention, most ships would literally dissolve under this corrosive bombardment.

But it’s actually quite simple to protect and extend the life of your vessel by using the right marine coatings. However, because each part of the ship has a different function and encounters different types of corrosion, there’s no one size fits all coating solution.

Let’s go over each area of a ship, and touch on what the best coating is, and why.

Hull coatings have two main purposes: to protect the steel from corrosion, and to keep the surface of the hull, especially the portion of the hull that contacts water, smooth and frictionless.

The coating that protects the hull, the boot-topping, has to be extra tough, as it can take some serious punishment during docking and undocking. Vinyl and chlorinated rubber paints used to be very common here, but have been largely discontinued because of their high VOC levels.

Today, the preferred high-performance coating is a multiple-layer high solids epoxy. A zinc-rich primer with at least two epoxy coatings is a good starting point for the boot-topping.

For the part of the hull that’s going to contact water, you’ll want a good antifouling coating. This keeps the hull smooth by discouraging the growth of marine life and microorganisms that can attach themselves to the hull. How important is a good antifouling coating? Drag from a fouled hull can increase fuel consumption by up to 40%, along with a commensurate increase in air pollution.

We should note that, with the hull and the other sections of the boat, these coatings will be maximally effective only if the steel surfaces are properly prepped.

In addition to friction and wear from routine deck activities, the entire deck is exposed to salty air and seawater – a very corrosive combination. It’s also covered in salt-laden dew each night, which is then heated up in the daytime, which compounds the problem.

One of the best strategies to protect your deck is a multi-step, high-grade coatings system consisting of a primer, an epoxy midcoat, and a recoatable topcoat.

A zinc primer goes down first to enable the actual coating to adhere to the metal deck. On top of that goes a high solids epoxy coating that actually shields the deck from corrosive substances – epoxy polyamides or a good surface-tolerant epoxy both work great here.

Finally, you’ll want a surface coating to protect the epoxy itself from deterioration. A polyurethane topcoat can shield your epoxy coating from harmful UV light, which can cause them to fade or chalk, while an additional coat of something like a glass-fiber reinforced epoxy can provide protection from knocks from heavy equipment. Epoxies can be very slippery when wet, so for safety reasons, high-traffic areas should include non-skid additives in their coating.

An intriguing alternative coating for the deck is a polyaspartic coating. Polyaspartic coatings are resistant to UV light, and are less slippery than epoxies – great for high-traffic areas – but are more expensive overall.

The ballast tanks have some of the highest potential for corrosion of any part of the ship. Because they’re constantly being flushed with seawater, they experience an accelerated rate of corrosion, along with dramatic temperature fluctuation.

The industry standard for ballast tank coatings is a surface-tolerant or a coal-tar epoxy, as they’re very resistant to seawater corrosion, and compliant with Safety of LIfe at Sea (SOLAS) convention provisions regarding seawater ballast tanks. Multiple epoxy coats can further extend your protection.

The superstructure has a lot of exposed area, which brings its own unique challenges. Although the standard multi-layer high solids coating system (zinc primer/epoxy coat/protective topcoat) provides excellent protection, it can be laborious and expensive when it’s time for the inevitable repairs and recoats.

For that reason, some people prefer acrylic or alkyd coating systems— which are easy to reapply, but also fade much faster than a high solids coating. In the end, this is going to be a judgment call.

For the superstructure, you might also want to consider an anti-rust finish.

Selecting a coating for cargo tanks can be tricky. The coating has to resist any cargo that might be transported, any substances released by the cargo, and the cleaners that will be applied between loads. They also can’t contaminate any cargo that’s going to be consumed by humans.

The best coating is going to depend on what kind of cargo you anticipate carrying. Phenolic epoxy is one of most versatile coatings, in terms of the range of cargoes it’s compatible with; bimodal epoxy is also extremely versatile, with reduced absorption, but it  requires lengthy post curing. For tanks handling petroleum or chemical products, an epoxy mastic coating like Carboguard 890 offers high chemical resistance.

With the estimated cost of corrosion-related expenses totalling $2.5 trillion according to NACE, it pays to find the right coating for your ship.

Tommy O’Shaughnessy is the owner of CDN Paint, the online platform that connects owners, facility managers, engineers (and everyone else) with top-rated coatings professionals.