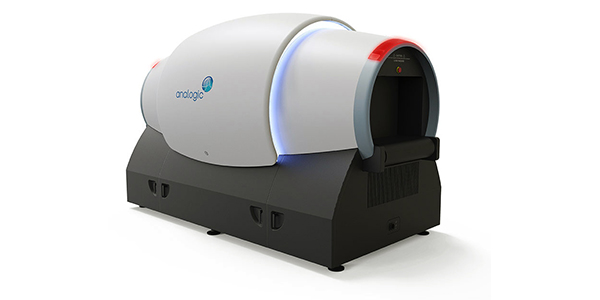 More than likely, most of us rarely stop to consider that we all live in an analogue-based world of information. Almost all of the information we’ve been collecting up until several decades or so ago has been in analogue format. With the invention of the computer and the advent of analogue-to-digital conversion, critical information can be processed, analyzed, archived and accessed faster and more reliably than ever before. The conversion of information to a digital form means a world of difference to professionals in the medical field, the military and manufacturing companies – indeed, in any industry requiring unsurpassed precision in critical data, its management and its access.

“Our original expertise was in analogue-to-digital (A-to-D) conversion, the taking of electronic analogue signals from the real world and converting them to digital format for processing by computers,” says Bernard Gordon, founder, chairman and chief executive officer of Analogic Corporation of Peabody, Mass., who received the National Medal of Technology for his pioneering A-to-D inventions during the 1950s. “The technology for capturing data from the analogue world and converting it to digital format has been the core of our success in a wide range of applications.” Digital formats offer higher levels of speed and precision not possible with analogue.

About 75 percent of Analogic’s business is focused on the medical field, and 25 percent on industrial and commercial applications. Analogic has a strong international presence through its seven subsidiaries, each of which contributes digital expertise to diverse organizations worldwide.

In 1975, Analogic developed instant-imaging CT scanning, which revolutionized computed tomography. “Since then we have developed into the world’s leading supplier of high-performance CT data-acquisition systems and more recently as a supplier of advanced economical CT systems,” says Gordon.

The success in this area then led Analogic into supplying precision subsystems for more than 75 percent of the MRI systems in use today throughout the world. The company also provides about 50 percent of all the power systems for MRI installations worldwide. Analogic is a leading OEM supplier in CT, MRI and ultrasound equipment.

“We were fortunate to be at the forefront of non-invasive diagnostic imaging, which considerably reduces the need for exploratory surgeries. Such operations are very costly and can be risky and difficult for the patient,” says Gordon. “Our people take pride in the fact that what they are doing every day is, indeed, life-saving and life-enhancing. Today’s trend toward outpatient surgery is growing exponentially and that is due, in large part, to diagnostic imaging.”

The Heart of the Matter

Camtronics Corp., a subsidiary of Analogic, is a leading manufacturer in the cardiovascular information management market. “Cardiovascular health professionals can access the VERICIS™ system, which integrates images from various imaging techniques, such as ultrasound, computed tomography and radiography, and patient data used in cardiology. The system archives all this information digitally,” explains Tom Miller, president and chief operating officer. For example, in the cardiac catheterization lab, clinicians typically take thousands of frames of video of the heart in action. “That videocassette would be the only record, so if a consultant needed to examine it, it would have to be pulled from archives in some obscure location, duplicated and then sent to the referring cardiologist. Before cardiovascular information management became a reality, that video could not be integrated with other cardiac information, such as radiography or ultrasound.”

Exact copies of the data contained within these systems can be sent anywhere in the world. “It’s instantly accessible by the clinician, who can manipulate those images to extract optimum data and maximize the sharpness of the feature of interest,” continues Miller.

Subacute and non-acute care markets are experiencing dynamic growth. Analogic is a leading developer of patient monitors. “These are multiparameter, non-invasive monitors used in ambulances, homes, nursing homes and rehab centers,” explains Miller. “They monitor parameters such as temperature, respiration, heartbeat and blood pressure, and they sound an alarm if anything goes beyond the norm. The systems can store data and transmit it by modem to the clinician or any specialist, as necessary.”

Analogic supplies Eastman Kodak with complete digital radiography systems, which convert X-ray signals directly into digital images readable on the workstation screen. According to Miller, “You can immediately see the image you are getting. This system eliminates a lot of the frustration and delays associated with the older method of taking X-rays and processing the film. Patients would have to wait for the X-ray film to be processed and read. If the patient had moved and the technician couldn’t get a good image, they would have to shoot a new series of X-rays. Reshooting film increases a patient’s X-ray dose, keeps a patient in the radiology department longer and reduces the number of patients that can be imaged in one day. Digital radiography allows clinicians to view the images in real time and to heighten the contrast and filter the images in ways not possible with film techniques. In diagnosing a tumor, for example, the doctor can isolate certain parts of that tumor and manipulate the image for better evaluation.

Anrad Corporation of Montreal, another of the company’s subsidiaries, is the world’s leading developer of direct digital radiography detectors. These use flat-panel, selenium-based detectors that capture X-rays better than any other method, converting them directly to images for the computer to read.

B-K Medical A/S is Analogic’s Danish subsidiary, and is a leader in ultrasound for several niche clinical markets. B-K is a leading supplier of specialized ultrasound systems and transducers for urology, surgery and interventional radiology. The company’s equipment, for example, is widely used in bracytherapy, which involves ultrasound-guided radioactive seed implantation for treating prostate cancer. Analogic’s Ultrasound Division designs and manufactures ultrasound systems and subsystems for OEM customers. The division is also pioneering the concept of the “ultrasound engine”, which provides approximately 80 percent of a system’s functionality. The OEM customer needs to provide the remaining 20 percent, including the distinctive user interface and application software. The engine enables OEM customers to significantly reduce both development cost and time to market.

Analogic has an impressive presence in industrial applications as well, including automatic-test-equipment (ATE) systems, Internet-protocol telephony and high-performance embedded multicomputing equipment. The company is a leading supplier of critical components for ATE systems, including waveform generators, synthesizers and digitizers. These systems generate signals that are used to “exercise” or test complex electronic components. Analogic is a supplier of both modular and PC card-based systems. The PC card-based systems are particularly hot because of industry’s desire to use the PC as an assembly-line test controller and data storage device. Real-time testing of fast and sophisticated components such as hard disk drives and automotive products require the high speed and accuracy that Analogic test equipment provides.

Analogic is now a leading player in the transmission of voice over the Internet (using voice-over-Internet protocol, or VoIP) and created Anatel Communications to focus exclusively on this market. “We are becoming one of the world’s largest suppliers of subsystems for VoIP,” says Miller. Another of the company’s subsidiaries, SKY Computers of Chelmsford, Mass., is one of the world’s leading suppliers of high-performance embedded multicomputing systems. Many industries need image reconstruction capabilities, whether for medical imaging, radar, sonar or industrial scanning of equipment. They need high-performance embedded computers to process high-resolution images quickly.

The first company to develop a multislice, three-dimensional CT scanner, Analogic used this technology to design explosive detection scanners. The EXACT™ is the only security CT scanner in the world able to provide the data to produce 3-D images of the entire contents of luggage or a package in approximately five seconds.

Gordon stresses the company’s commitment to providing complete solutions to its customers. “We will design for a customer, but with the understanding that we will also manufacture,” he says. Analogic has a worldwide reputation as a center of expertise in the analogue-to-digital process and is renowned as a superior engineering company. It has more than 475 people on its engineering staff and more than 1,850 employees in its worldwide facilities, which occupy nearly three-quarters of a million square feet.

Over the past several years, Analogic considerably expanded its engineering and manufacturing areas in order to provide these complete solutions. “We use demand-flow technology on our production lines so that we can remain responsive to our customers’ needs,” explains Miller.

The $300 million company has embarked on a forward-looking strategic course. “We are well positioned within our focused niches to grow significantly in the years ahead,” says Miller. “We will continue to lead in understanding complex analogue-to-digital concepts and in extracting and converting data to the digital world, so that information can be processed at higher speeds for medical and industrial applications.”