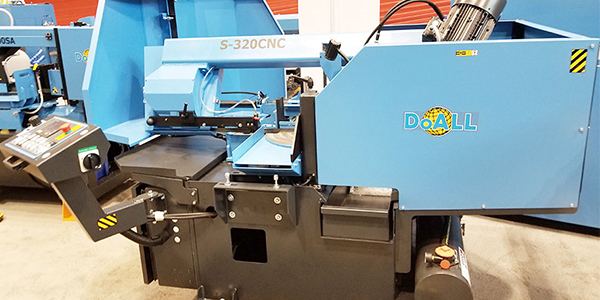 DoALL is a company that started more than three-quarters of a century ago with a major innovation, the creation of the first-ever metal-cutting band saw. But instead of standing pat, this national industry leader in the distribution of machine tools has brought its spirit of invention forward into the 21st Century.

For example, imagine getting drill bits or band saw blades from a vending machine.

The Illinois-based company is already doing that, establishing vending machines for machine tools on the sites of some of its larger industrial customers, a development that both dramatically speeds up the supply chain while eliminating a small fortune in potential waste.

“Consider a vending machine that dispenses Coke. Before that machine came along if you wanted a Coke you had to go out to the store and buy one,” explained Bill Henricks, the vice president for marketing of DoALL. “And if you wanted a drill bit, you had to go out and buy one.” But the new on-site machines not only speed up the installation of key replacement parts, they also reduce or eliminate unnecessary loss of inventory as well as theft.

Significant savings
Henricks said that DoALL already has about 700 such vending machines helping to service some 120 of its top customers, and even more machines are on the way. “Our typical customer will save 20 percent on their cost of production from a vending machine,” he said. “When you consider that a carbide drill is up to $120 for each drill, you’re talking about significant savings.”

DoALL is already the only American manufacturer of all four components of band sawing: band saw machines, band saw blades, cutting fluids and material handling equipment. As its largely industrial customer base has waxed and waned, the company has mastered innovative methods for making and selling its products. Its next major move is a renaming of its distribution to DGI Supply, a major rebranding initiative that will act to create a distinction in the market between DoALL manufactured products and DGI Supply distribution.

The roots of DoALL go way back to the early 20th Century. In 1919, DoALL founder Leighton A. Wilkie and his father Julius developed an automotive connecting rod alignment machine for auto repair shops and marketed it by the technique of direct-demonstration selling.

Their success in that venture led the Wilkies in 1927 to establish a firm called the Continental Machine Specialties Company, in Minneapolis, Minn., to engage in tool and die work and metal stamping. The venture’s real breakthrough, however, occurred six years later, when Leighton Wilkie developed the last of what are known as the seven basic machine tools, the metal-cutting contour band-sawing machine. Over the years that followed, the company both broadened its product line while responsible for a number of innovations, including bringing automotive-style assembly line work to the tool-making industry.

“In and around the late ’60s, we got into the area of industrial distribution and got into full lines, so that we supplied the whole shop and everything that goes into it,” Henricks said. In addition to all types of machines and machine parts, DoALL started to sell items like janitorial supplies.

The changes in the company’s product lines helped it to dramatically grow its customer base, so today DoALL has a whopping 35,000 active customers, in industries ranging from automotive to aerospace.

On every carrier
Along the way, DoALL has also achieved some unique landmarks. Henricks said that the company manufactures the superabrasive wheel that is used to manufacture virtually all golf balls make by Wilson and other top American suppliers, and also developed the gauge blocks that are used by the U.S. Board of Standards for determining length and other measurements.

“We sell a lot to the military – there’s a DoALL saw on every aircraft carrier,” Henricks said.
DoALL employs approximately 1,200 people around the globe. Its manufacturing is done from four main facilities, including a 500,000-square-foot facility in Minnesota that continues to made bandsaws and three other facilities surrounding the corporate headquarters in Des Plaines, Ill., that make cutting fluids and abrasives, coolants, and saw blades.

In addition, its distribution network is broad and growing with some 39 call centers around the nation where customer inquiries are routed, both to save some money on long-distance charges but also to make sure that clients are talking to their local agents. “People from Louisiana like to deal with other Louisianans,” he said.

The company also has an international product distribution system that is heavily focused on North America, with some nine additional locations in Canada and another six in Mexico. The company has some sales in Europe, with sites in the Netherlands and the United Kingdom, and a distribution facility in Australia.

A lot of DoALL’s customers are setting up operations in China, where the cost of labor and currency issues make it prohibitive for the company to locate operations. But Henricks said the firm has a solid strategy to continue to hold onto its core customers.

“We sell a solution that saves our customers money – that’s more relevant now than ever,” he said. “They need to trim costs, and get a handle on indirect supplies.”

Henricks added that the distribution system is also heavily automated to speed shipments to customers.

Another customer that is taking advantage of DoALL’s high-tech methods is American Standard, the industry leader in manufacturing toilets, which relies on DoALL for the cotton and Kevlar gloves that its 1,400 or so employees use. American Standard goes through a whopping $1 million in these gloves every year.

The new DoALL vending system that the customer uses has a high-tech scanning system that guarantees that only proper employees can access the gloves. According to Henricks, employees are only taking one pair of gloves a week and usage is down by 40 percent, meaning that American Standard is saving $400,000.

As you might expect, DoALL is now moving aggressively into the area of RFID, which stands for radio frequency identification. Henricks said that DoALL is the first tool manufacturer in America to use RFID for inventory management.

In a couple of months, he said, DoALL is going to be moving into a new headquarters in Des Plaines as the company also looks at new warehouses that will employ the latest high-tech tracking technologies. “We’re keeping the staff lean and focusing on preventing errors and on real quality control,” Henricks said.

It’s hard to live up to a name like DoALL, but there’s already virtually nothing this can-do company hasn’t accomplished.