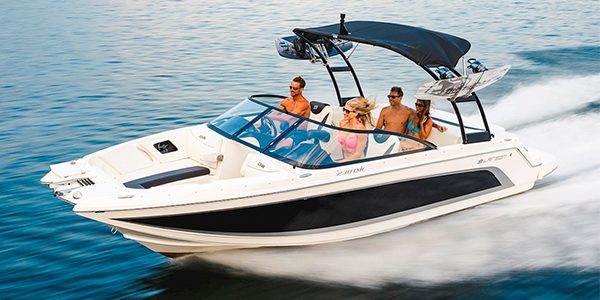 Larson Boats, America’s oldest continuous boat maker, is famous for its classic designs and old-world craftsmanship. Each one of its powerboats — from its sleek runabouts to its elegant cruisers to its versatile deck boats — is a testament to the company’s legendary commitment to quality. Also renowned as an innovator, Larson has continually introduced radical new designs and manufacturing concepts throughout its 89-year history that have gone on to set marine industry standards.

As Larson Boats sets sail into the 21st century, it has pioneered a new fiberglass process that promises to change the way the world makes boats. Virtual Engineered Composites (VEC™), a process owned by Larson’s parent company, Genmar Industries — the world’s largest independent powerboat maker — is the first breakthrough in boat-building technology in 50 years. Time Magazine says, “The VEC™ process is to manufacturing what DOS was to the personal computer business in the early days.”

VEC™ is a computer-controlled composite manufacturing process that uses a closed-mold technique to decrease the emission of styrene during the lamination process, reducing waste and air pollution. Not only does this process produce a tougher boat, it also surpasses EPA emissions requirements, an appealing benefit for Larson, the 1999 and 2000 recipient of the Governor’s Award for Excellence in Pollution Prevention.

At its new multimillion-dollar, 94,700 square-foot facility in Little Falls, Minn. — which houses nine other support facilities on 61 acres — Larson can apply the VEC™ process to make boats four times faster than with the traditional open-molding method. Larson is so confident in the durability afforded by its new technology that the company is backing its VEC™-manufactured boats with a lifetime limited warranty, transferable to a second owner.

“VEC™ technology is going to change the industry,” predicts Marketing Manager Mary Patrick. “It’s going to raise the standard for everyone.”

Racing from the Start
Larson Boats got its start in 1913 on the eastern shores of the Mississippi River when 19-year-old Paul Larson designed and built his first duck-hunting boat. Soon, he was taking orders from local hunters, who wanted one just like it. In 1916, Larson Boats was officially founded when Larson built his first boat works on family-owned land in Little Falls.

In the 1920s, the fledgling business got a boost when it became Minnesota’s first dealer of Johnson outboard motors. By mid-decade, the demand for Larson’s lightweight racing boats necessitated a factory expansion.

Over the years, Larson Boats thrived with the frequent addition of innovative boat designs. Following an industry lull during the Great Depression, business picked up in the mid-1930s with the growth of the resort industry. Minnesota’s many lakes and vacation areas provided Larson with active business for its fishing boats and runabouts.

A key innovation at this time led to a famously strong hull: the double-ribbed bottom, which had half-rib sections inserted between the full ribs. Boat buyers responded with enthusiasm, and sales grew. By the decade’s end, manufacturing space had doubled, and distribution expanded to other areas of Minnesota and adjoining states.

During World War II, pleasure-boat production came to a standstill. Larson was awarded a government contract to produce training and patrol boats for the Coast Guard. After the war, Paul Larson, inspired by the aircraft industry’s use of aluminum, began to produce boats made of this lightweight material. A new company was launched, Larson Watercraft. Stock was sold to raise capital for the expansion of production facilities, and the name was changed from Larson to Crestliner, which continues to be a leading aluminum boat brand today.

Catching the Next Wave
After fire destroyed the Larson boat works in 1949, the company reinvented itself as a producer of fiberglass pleasure boats, the next trend in boat-building technology. Larson was the first major boat company to sign an agreement with the Rand Corporation to use its patented fiberglass cutting and application spray guns in the production of hulls and decks. This enabled Larson to produce quality fiberglass boats in large numbers in the 1950s, making it a leading national brand. The 14-foot Falls Flyer runabout, Larson’s first molded fiberglass boat with a wood-reinforced hull, was created with Little Falls native (and Paul Larson acquaintance) Charles Lindbergh in mind. By 1967, Larson was the largest fiberglass boat plant in the world, with sales in excess of $20 million.

After a brief period in the 1960s, when Larson was owned by Brunswick Corporation, sales and manufacturing capabilities expanded. New manufacturing methods were developed, including more rugged stringer systems and an internal fiberglass/foam combination, giving the hull the built-in safety of foam flotation while dampening noise and vibration.

A Life Line
At the start of the 1970s, Larson was an industry leader with its line of stylish new runabouts and cuddy cruisers, and a loyal customer following. By the decade’s end, however, the company’s other recreational divisions (including snowmobiles, water skis, folding travel trailers and pool tables) were slowly draining profits away from the boat operations. Larson Boats was rescued from financial disaster by Minneapolis investor Irwin Jacobs, who was in the process of building the recreational boating powerhouse that is now Genmar Industries. By the late ‘70s, Larson Boats was back in shipshape condition under the auspices of Genmar. The company concentrated on trailerable cruisers, a growing segment of the boating market, and became the first boat company to offer stereos as standard equipment.

In the 1980s, Larson obtained the rights to use the new Delta Conic™ hull and the Duo-Delta Conic™ hull, patented designs developed by noted marine architect Harry Schoell of Schoell Marine. The hull is designed with a deep-V forward section for sharp entry into rough waters. Its aft area has two large, delta-shaped sections that create fast planing performance and significantly more stability. The Delta-Conic line included cruisers, outboards and stern-drive runabouts.

Larson’s sales for the model year 1985 broke all previous records. And, as the 1990s approached, Larson enjoyed its most solid market position ever, with a strong national dealer organization that covered nearly all of the United States and Canada.

The Course for the New Century
From a one-man boat works, Larson Boats has grown into a 1,000-employee, internationally acclaimed manufacturer. On the forefront of boat-making technology, the company was chosen by the editors of Popular Mechanics magazine to receive the Design and Engineering Award for 2001.

At the start of the 21st century, Larson Boats is poised to take the boating world by storm with its revolutionary new VEC™ process. Four of Larson’s 2001 runabout models feature the new technology. According to Patrick, another five VEC™ models will be added this summer. And, eventually all Larson boats 24 feet and less will be made with VEC™ technology.

“The implementation of VEC™ manufacturing offers our customers cutting-edge technology combined with old-world craftsmanship,” says Patrick. “Larson has the best of both worlds.”