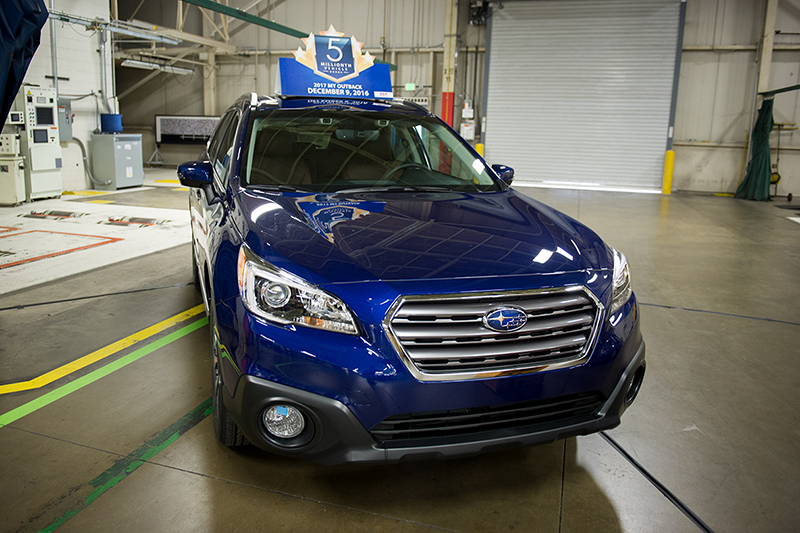 SIA manufactures the Subaru Outback and Legacy models for the North American market and just last year added the Impreza to its production lines. David Soyka reports on this automaker’s $1.3 billion investment to ramp up production capacity to meet continuing demand for these three highly popular vehicles.

Subaru of Indiana (SIA) keeps adding to its legacy—and we just don’t mean the Subaru Legacy it manufactures along with the Outback and Impreza models—in facilities totaling some 4 million square feet on 832 acres in Lafayette, Ind.

SIA production volume has more than tripled over the last ten years; in its last fiscal year it manufactured 313,500 vehicles and is projected to reach 335,000 in fiscal year 2017 (which ends March 31, 2017). Last December, SIA rolled out its five millionth vehicle—a blue Outback— and last July SIA marked the production of its three millionth Subaru. After making various Isuzu, Honda and Toyota models, SIA currently produces only Subarus for the North American market, though it has exported vehicles to over 50 countries worldwide.

The only Subaru manufacturing plant outside of Japan, SIA is in many respects a made in America manufacturer—a good corporate citizen that makes significant contributions to the local economy. SIA is the largest taxpayer in Indiana’s Tippecanoe County, paying over $5 million in property taxes in 2016.

SIA also gives back to the community. SIA donates vehicles, engines and transmissions to schools and hosts or sponsors numerous charitable events. SIA received the 2012 Indiana Governor’s Award for Corporate Service for its charitable activities and its Subaru Serves associate volunteer program.

Last, but not least, on the eve of celebrating its 30th anniversary this spring, SIA has invested over $1.3 billion over the last four years to expand its production volume capacity and prepare for new model production. “We stopped producing the Toyota Camry (production moved to Toyota’s plant in Georgetown, Ken.) primarily to make room to build the Subaru Impreza, which started in November 2016,” explains Tom Easterday, senior executive vice president. “We now have two production lines to build the Outback, Legacy and Impreza, and we’ve implemented a number of kaizens, new technologies and best practices to speed up those lines. Building the Outback on both lines gives us the flexibility to balance production efficiently between the two lines depending on current demand levels for each model.” In addition, SIA has expanded its paint shop facilities, and was granted a new air operating permit allowing SIA to build up to 514,000 units on a rolling twelvemonth basis.

Moreover, expanded production capacity allows second quarter production in 2018 of a brand new three-row mid-size crossover sport utility vehicle (SUV) based on the Ascent Concept car recently shown at the New York Auto Show. (SIA used to make the now discontinued Subaru Tribeca.) “Right now I can’t tell you much more than,” Easterday says, though it is widely expected the car will be based on Subaru’s new global architecture—a version of which is already in place with current Impreza— that offers improved crash safety, handling performance and riding comfort.

Of course, expanded production capacity goes hand-in-hand with new jobs creation, a popular topic of late with American manufacturers and the current political landscape. “A lot of people think that automation means fewer jobs, when in fact it often creates new and arguably better jobs,” Easterday says. “Every manufacturer is looking to automate to improve output, efficien cy and quality. But that doesn’t eliminate the need for people. Where we’ve added most of our associates is in the trim and final area. Trim and Final is where our associates affix parts onto the vehicle and perform quality inspections.”

Another expanded job category is engineering expertise. “We need process engineers to develop and execute our various continuous improvement programs,” Easterday says. “Speeding up a production line involves more than just figuring out how to make things move faster; it also involves making each job more efficient without compromising our very high quality standards. With major model changes happening every five years for each model, we will be experiencing four major model changes every five years. So, we need more manufacturing and process engineers to more frequently work on new model development, equipment design, line set-up and the introduction of new component parts to the production process.”

Associates typically work in teams of five to 12 headed by a team leader. Members rotate every couple of hours among three to five different jobs. “It keeps associates focused and is better ergonomically. We have robots and other equipment to do the repetitive single-task, ergonomically-challenging activities that used to characterize the auto manufacturing industry,” Easterday says. “We want to create an environment where our associates feel motivated and satisfied with their jobs, that they are making a meaningful contribution.”

Indeed, SIA is the only auto assembly plant in America to increase wages for its production employees for 26 consecutive years. SIA associates also do not pay any premium for their healthcare coverage. In addition, the company offers an on-site health and wellness center, a recreation center and child development center. Veteran Hiring and Intern Training Easterday is particularly proud of two programs related to associate hiring and development. “Our military-to-hire program works with the army at Fort Campbell in Kentucky, as well as Indiana’s national guard and reserves, to identify potential new associates,” he points out. “Veterans have a great work ethic and in many cases have the mechanical skills and training that we as an auto manufacturer require. Of the 1400 new associates we recently hired, over a hundred were former military.” SIA’s AIM (Advanced Internship in Manufacturing) program is offered to local high school graduates as a way to combine college-level classroom study with hands-on experience. “Two days a week, students take classes through Vincennes University and Purdue University at the Purdue Polytechnic Institute-Lafayette campus, located at the SIA plant, to earn their Associate’s degree in Computer Integrated Manufacturing. The other three days, students apply the technologies learned in the classroom in various technical maintenance rotation assignments to learn real world problem solving skills as well as practical tasks such as testing robots. And get paid to do it,” Easterday notes. “Upon successful completion of the program, AIM students qualify for a fulltime position at SIA, or many of our suppliers.”

After six months of full-time employment, AIM graduates can continue their education at the Purdue Polytechnic Institute-Lafayette SIA site and earn a Bachelor’s degree in Engineering Technology, paid for by SIA. Similar education benefits are extended to all SIA associates; SIA pays the tuition for associates to earn Purdue degrees on-site or degrees at the nearby campus of Ivy Tech Community College.

SIA’s OSHA (Occupational Safety and Health Administration) Incidence Frequency has been substantially better than the industry average for several years, with SIA being the only auto plant to achieve four straight years with an OSHA Incidence Frequency of under 1.0. In addition, SIA was awarded the 2015 Indiana Governor’s Award for Safety.

Ramping Up for the Future

“Subaru did well in 2009 when most other automakers were feeling the effects of the recession (see Ramping Up Production),” Easterday notes. “Sales for the US auto industry dipped to 10.4 million that year and have been recovering rapidly since then. However, the market has now leveled off. In 2015, domestic auto output was about 17.5 million unites, and 2016 was roughly the same. We aren’t anticipating a lot of growth for the industry as a whole going forward over the next few years. That said, Subaru makes crossover vehicles in the light truck segment which is the most popular segment with consumers, representing over 60 percent of sales in the domestic market. Needless to say, we’re highly optimistic about the future.”

While Subaru’s famed Lineartronic CVT (continuously variable transmission) may not have an “overdrive” selection, SIA has certainly shifted into high gear.