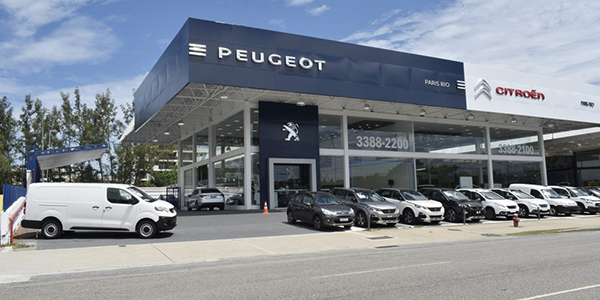 When in February of 2001 the Porto Real facility was inaugurated, it began manufacturing two vehicle models simultaneously. “We start in Brazil, with the Porto Real facility, the production of the Peugeot 206 and the Xsara Picasso,” says Mauricio Martins, PSA Peugeot Citroën Purchase Director for Latin America. That was just the beginning of a rewarding relationship between PSA and Brazil.

Today, the Porto Real facility covers an area of 300 hectares, employs 2,300 workers, and has four principal workshops: a body-in-white unit, a water-based paint shop, an assembly line and, finally, an engine assembly plant. Opened in March 2002, the engine plant has an annual capacity of 135,000 units.

PSA products were available in Brazil before the Porto Real facility was opened. However, this was only through imported and very expensive vehicles. With the new facility in Brazilian territory, and the consequent increase in local production, PSA started to grow an important niche of the Brazilian automobile market. As a result of the new Brazilian factory, PSA Peugeot Citroën saw an increase in sales of around 13 percent in 2004 alone, or the equivalent of almost 64,000 units sold. In 2005, PSA Peugeot Citroën of Brazil ranked fifth in the Brazilian market, representing 5 percent of its entirety, with sales rising to 27 percent, or almost 82,000 units.

The importance of the partnership established by PSA in South America can be understood through the company’s sheer growth: the production capacity of PSA in Brazil is now 100,000 cars a year working two turns. In fact, PSA Peugeot Citroën has doubled its size from 2003 to 2005 in Brazil and, according to Martins, it is expected to double again from 2005 to 2007.

For the future, the plans are very optimistic: “Our plan is to increase our production capacity, our presence in the market, and to offer a new car every year,” says Martins.

THE DIFFERENCE
The Brazil automobile market, estimated to consume around 1.5 million vehicles in 2004, is defined by consumer interest in small-sized cars. Meanwhile, in Argentina, the other key market for PSA in Latin America, consumers seek medium-sized cars.

Even knowing this aspect of the Brazilian market, PSA Peugeot Citroën does not work with popular cars, which are the small-size 1.0 engine motors. Instead, PSA focuses on a niche of the Brazilian market where very economical cars with low potency motors are not the consumer’s first option. “The Peugeot Citroën consumers are more interested in elegant and sophisticated designs,” explains Martins, “not that price doesn’t matter, but it is just that for our consumers price is not primordial.”

One difference in relation to the other companies in the automobile market is that PSA Peugeot Citroën has been building its reputation on the strong aesthetic appeal of its products. The unique design goes hand-in-hand with PSA Peugeot Citroën. “One thing that differentiates us from others car companies is our modern, aggressive designs. We offer cars that are synonymous with elegance and sophistication,” says Martins.

This does not mean that PSA has given up different slices of the Brazilian automobile market. “We produce, for example, the 1.4 motor, which is almost as economic as the 1.0, but better than the former since we can offer more technology with a more powerful motor,” says Martins.

This small-size engine brings other advantages for PSA. According to Martins, “more than being competitive in the small-size engine market, we can produce the 1.4 motor with a very high index of nationalization.”

ENVIRONMENTALLY SAFE
PSA Peugeot Citroën is aware that being environmentally safe may be decisive not just for obtaining the trust of consumers, but also for being responsible with the new international environmental regulations.For example, PSA is very interested in bio-fuels, which offer a direct alternative to fossil fuels. Their use helps to reduce greenhouse gas emissions. PSA has been using bio-fuels in its vehicles since 1998, and has been engaged in the development of technologies that preserve or even improve the quality of the motor while avoiding pollution.

Last year, PSA announced the launch of the Brazilian production of flex-fuel engines for the Peugeot 206 and the Citroën C3. The flex-fuel engine is designed to be able to run either with gasoline or ethanol, or even a mixture of both. In the Brazilian market today, 80 percent of the line-up is sold with flex-fuel powertrains.

The benefits of bio-fuels are significant. Since it is estimated that more than half of the carbon monoxide emissions in the atmosphere come from automobiles, the widespread use of ethanol would be of great ecological impact. On the other hand, while being ecologically safe and reducing the dependency on petroleum, bio-fuels may even make motor engines more efficient and improve their overall performance.

“We have many projects related to environmental protection. We are concerned with the environment not just regarding the car pollution but also regarding our industries” says Martins.

THE KEY POINT
PSA’s interest in bio-fuels, particularly in the case of ethanol, reveals its policy of local integration. Since Brazil is historically a leader in the production of sugar cane, from which ethanol is derived, the use of ethanol in cars is simultaneously ecologically conscious and generates an incentive for local economic development. In this way, PSA Peugeot Citroën is helping to put a part of the complex Brazilian economic chain in motion.

Moreover, car engines that can run with ethanol may be very attractive to Brazilian motorists for other reasons. In Brazil, ethanol can cost a third of the price of regular gasoline. Taking advantage of the fact that, in Brazil, ethanol is readily available at the pump, PSA is offering cars that are perfect for the pocket of Brazilians costumers.
This detail shows PSA’s strategy of developing its business in accordance with local characteristics. “We have a strong partnership with providers in all of Latin America. Depending on the vehicle, we may have from 75 to 80 percent of local integration. And when we have this local integration,” explains Martins, “we will have different products for
each region and these products will be tailored to each specific market.”

Having integrated with the local economy is a milestone for PSA. As Martins says, integration is the key for success: “We have excellent deals with the local providers, which makes PSA deeply locally integrated.”

PSA Peugeot Citroën of Brazil is operationally tied to its French headquarters, but this does not mean that the way to do business in South America is determined by the French matrix. “We do not do business here as we did in France,” says Martins. The directorship in Brazil is free to decide how to conduct deals and to choose the best way to develop strategies.

CULTURAL DIVERSITY
With regard to the relationship between Peugeot and Citroën, Martins explains that: “we are one group with two marques. Peugeot and Citroën are harmonic. The two volume brands have distinct but complementary personalities.” In the marketing, sales, and customer relations spheres, Peugeot and Citroën may have distinct policies. However, in keeping an eye on efficiency and cost control, PSA Peugeot Citroën has a unified technical, industrial, administrative, and financial system.Instead of imposing a ready-made plan, PSA Peugeot Citroën is focused on taking advantage of multicultural differences. Having spread throughout South America, Central and Eastern Europe and China, having sold around four million vehicles worldwide, PSA knows that, in order to maximize the quality of products for local markets, close relations with local entities are fundamental. “We like to work like a team. Our local partner helps us to develop products that can better satisfy our local consumers. Cultural diversity is the key for our business not only in Brazil and Latin America, but also worldwide,” says Martins.

However, there is more to the Brazilian locale than a good working relationship. According to Martins, “We are very happy with our partners here in Brazil. We found a fantastic engineering capacity here that is combined with low costs. That makes Brazil and South America a center of excellence in the development of vehicles.”

In just five years, PSA Peugeot Citroën has shown that it is capable of undertaking a tough challenge and come out with flying colors. Having shown huge success in the Brazilian market, environmental awareness, and having achieved a solid alliance with the local culture and economy, it is not for nothing that PSA Peugeot Citroën is one the top, most prestigious automobile companies. PSA offers an unbeatable deal for all parties involved.