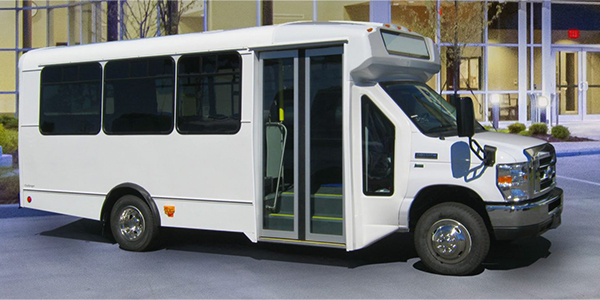 There are two things you should know about Champion Bus, Inc.: The company has the ability to bring products to market faster than any other competitor – usually within two or three months at the most – while offering the widest range of vehicles of anyone in the industry.

For 22 years, Thor Industries and Champion Bus have made a commitment reaching far into the future, and well beyond the next 22 years. “We are the leader in mid-size buses, easy access and exit low-floor buses, low cost fuel-efficient transit buses, and alternative clean-burning fuel buses and we intend to stay there,” says President Don Roberts. “Mid-size buses, those up to 35 feet, are the most cost effective, common sense mass transportation. They offer superior fuel efficiency, much lower up front and operating costs and are an obvious answer to traffic congestion.” The company currently is testing a new hydrogen fuel cell hybrid bus in the California desert. This innovative, zero emissions technology is hoped to solidify Champion’s position as the industry leader.

Drive Time
Who is Champion Bus’ customer? “If you see a bus on the street,” says Roberts, “that’s our customer.” Champion Bus has one of the most diverse product lines around. They’re heavy into the transit market (about 56 percent of Champion’s business is in this area), but also shuttle services, hotels, assisted living facilities, parks, amusement parks and national and state parks. The company also supplies buses and shuttles to parking lots. “It’s by far the largest product variety in the industry. Small to mid-size passenger buses and vans, cutaways, rail buses with diesel pushers and our new novelty, the trolley bus – the list and variety are almost endless,” says Vice President of Operations Warren Marsh.

The buses can carry anywhere from eight to 43 passengers and they’re being used just about everywhere. Boston is using trolleys as tourist guide vehicles; Chicago does as well. Champion has provided vehicles to Delta Airlines, Avis Rent-A-Car, Holiday Inn, Budget Rent-A-Car, the San Antonio Transit System as well as systems in Florida, Oregon, Philadelphia, New Jersey’s Atlantic City Jitney and the state of Oregon. “Hopefully we’ll be picking up four major contracts soon,” says Marsh, adding that Las Vegas, with its “open 24-hours” mentality, boasts the most Champion buses in the U.S.

A Smooth Ride
After a solid decade of growth, 2002 brought just a slight dip in sales for Champion as a result of the drop in air travel after the terrorist attacks of Sept. 11. But In 2002, Champion managed to achieve solid sales and net income, maintained its market share and develop a new lower priced, rear engine mid-size bus and the novelty trolley bus. An aggressive cost and capital employed reduction program was highly successful and the company is now well positioned for what it anticipates to be an inevitable upturn in the industry. “We maintained our leading role in the mid-size bus industry, increasing our market share to 38 percent and achieving profits despite a severe downturn caused in part by Sept. 11,” says Roberts. Sales in 2002 were an impressive $271.6 million.

So, just how does the company put all those vehicles together? With two, 90,000-square-foot, state-of-the-art manufacturing facilities in Lake City, Mich., and more than 5000 employees, who not only work on the Champion line but Thor’s recreation vehicle line as well. The company is certified ISO 9001, the international standard for world-class quality and is the only mid-sized bus manufacturer recognized by the International Organization of Standards.

In addition, improvements to products are always being made. “We now have our own paint booth,” says Roberts of the quarter of a million dollar investment. “We think it’s worth every penny. This way we can cut costs for our customers and monitor the work. We even have our own graphics department. It’s a timesaver, and again, having it in-house allows us to control the quality more. That’s better for the customer.”

Integrity and Invention
Today, Champion is focused on niche markets. In the last six months it has developed both a front and rear engine trolley, a rail bus on a rail pusher, and is set to introduce a new chassis on one of its product lines. “This is part of our Defender product line,” says Marsh. “A medium duty shuttle bus with a small low profile cutaway to compete with the van market.”

Focusing on these niche markets has helped sales during the past year, but Roberts admits it’s not an instant gratification process. “You have to get it out there and it can take up to a year for the bidding to start on the product. So it’s a slow process.”

Champion does a lot of custom work for clients, creating mobile medical units and broadcasting vehicles. “We’re a manufacturing company. Because we know our product and we know how it’s built, we can alter it fairly easily,” says Roberts. The company has managed to deliver on some tall orders, too. Three years ago the city of San Antonio, Texas requested 66 large intercity transit buses, all with alternative fuel systems in place. Similarly, the city of Dallas came up with a request for 91 buses.

Ultimately, Champion’s success has come from a corporate integrity that is scarce in the business world today. In a time when public stockholders are wincing after the effects of financial disasters such as Enron, companies like Champion remain polished and professional. “We maintain the integrity we have exhibited from day one. This is not to suggest that we will not make mistakes. We certainly will. But we will continue to treat our associates, customers and stockholders with utmost respect, fairness and openness,” says Roberts. “We always need to stretch our goals, take bolder, prudent risks, and raise the bar to the next level. There are no signs of complacency at Champion Bus.”