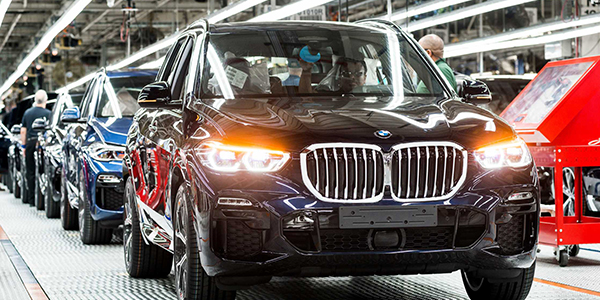 When BMW Manufacturing Co. rolled the new Z4 M Roadster coupe off its production line on February 28, 2006, the sporty and attractive vehicle embodied a major milestone: it was the one-millionth car produced at the Upstate South Carolina factory.

In the facility’s relatively brief 12-year existence, BMW Manufacturing Co. has accomplished a great deal: 2006 not only included the “one-millionth” milestone; it ushered in a new era. This year, the plant introduced new vehicle models and put its completely restructured assembly into full production. In addition, it will celebrate the 10-year anniversary of Roadster model production during 2006 Roadster Homecoming on Labor Day weekend, an observance that attracts thousands of BMW roadster enthusiasts from across the country.

A Decade of Roadsters
Back in 1996, the plant reintroduced the concept of the luxury roadster when it built its first Z3 Roadster, a model that generated renewed interest in sporty, two-seat vehicles. Thanks to highly visible product placement in a James Bond film (“GoldenEye”), the car became a cult item with loyal BMW customers.

The Z3, the first BMW to be manufactured exclusively outside of Germany, became the Spartanburg plant’s signature product. The next-generation Roadster (the Z4 model, a completely redesigned successor to the Z3, described as “a modern interpretation of the classic roadster”) went into production in 2002. The introduction was followed by an updated model in 2006 that, in turn, was followed by the Z4 M Roadster, the Z4 Coupe and the M Coupe, all of which went into full production in the spring of 2006. “These models, variants of the Z4 Roadsters, are built exclusively at the Spartanburg plant, which is BMW’s only manufacturing facility in the United States,” informs Bunny Richardson, the plant’s assistant manager of media relations. “They’ll be distributed worldwide.”

The new vehicles are based on the updated Z4 Roadster that boasts an engine with high horsepower, as well as superior agility and high performance. The M Coupe features BMW’s award winning 3.2-liter, in-line six-cylinder engine, which produces approximately 330 horsepower. “That means that out on the road, you can take it from 0 to 60 miles per hour in less than five seconds,” says Richardson. “It’s very much a performance vehicle. The Ms are our sportiest vehicles, and we’ve enjoyed a very loyal following for all of our M products.”

The new coupes continue the characteristic design language of BMW Roadsters, Richardson adds. “The modified front section incorporates new fog lights and xenon headlights featuring the four-lighted rings that have become a hallmark of the BMW design,” she says.

Further, the new models come in new exterior colors including Interlagos Blue, Sepang Bronze and Imola Red. Most likely, you won’t find such colors in a Crayola box, but you’ll no doubt see them out on the road in increasing numbers. “As usual, with a new model or new variant, we add colors,” says Richardson. “These were added to the M palette with the production of the M Roadster and M Coupe. You may see those colors moving into other models. That is usually what happens when a new color is introduced.”

Restructured Assembly Line
As with all of the Spartanburg plant’s vehicles, the new models will roll off the facility’s newly restructured assembly line. The complex reconstruction project entailed three years of planning followed by demolition and reconstruction. Essentially, BMW Manufacturing converted its two-line assembly system into a one-line system. This will enable assembly of Z4 Roadsters, X5 Sport Activity Vehicles, and new and future new models on a single line, instead of having a line for each vehicle.

“In all, it has been a very complex and arduous process,” says Richardson. But the plant expects to reap significant benefits. “The two-line arrangement limited our flexibility,” comments Richardson. “We believe the one-line arrangement helps us prepare for the future. It allows us to adjust to fluctuations in market demand, and it gives us the flexibility to vary the model combinations, based on customer demands. Most importantly, it allows us to introduce new models more quickly and easily into the plant.”

Demolition involved the removal of 3,000 tons of steel and scrap metal and more than 2,700 hand tools and miscellaneous items, such as vending machines. It also involved a shutdown that lasted almost two months. “We interrupted production for 56 days to perform complex and the highly coordinated demolition and reconstruction,” recalls Richardson. “The plant was down from the second of week of November 2005 to the first week of January 2006.”

During the production shutdown, associates who built the Z4 Roadster were trained on the X5 sports activity and those on X5 were trained on the Z4 so production could begin when the plant reopened. The project also involved installation of new and specialized equipment including automated robots and skid conveyors. Throughout the three-year project, assembly planning groups spent months designing and testing the new process layout, workstations and equipment.

The first vehicles of 2006 rolled off the production line on Jan. 12, only three days after associates returned from the 56-day production interruption. The project not only involved a sizeable time investment. The financial investment was quite substantial, costing the plant $75 million.

Continuous Growth
Building expansions related to the restructuring project added more than 70,000 square feet of floor space to the facility. The changes underscore BMW Manufacturing’s constant state of growth. Since it opened in 1994, the plant has undergone regular expansions and restructurings, increasing not only its size and capabilities but its workforce roster.

“In all, we’ve invested about $3 billion in the plant,” says Richardson. When it went online, BMW Manufacturing Co., a subsidiary of BMW Group in Munich, Germany, became its parent company’s first full manufacturing facility outside of Germany. Two years after its opening, it added 300,000 square feet of manufacturing space in body and assembly areas. In 1998, those areas expanded further. Square footage increased from 1.2 million square feet to 2.1 million square feet, to accommodate production of the X5 Sports Activity Vehicle.

All of these developments helped steer the plant to its one-millionth-car milestone. “It’s hard to believe we’ve actually done that many,” says Richardson.

From an emotional standpoint, the number may seem hard to fathom. But looking at it from an objective, logistical perspective, it really doesn’t seem that hard to believe. From 1999 to 2003, to meet increasing customer demand, the Spartanburg plant boosted its output from 51,878 to 166,090 units. Looking at specific models, the plant launched production of its Z4 Roadster model in October 2002. By November 2004, it had built its 100,000th Z4 model. That’s the kind of productivity that can turn the digit counters faster than a pinball wizard positioned at his or her favorite machine.