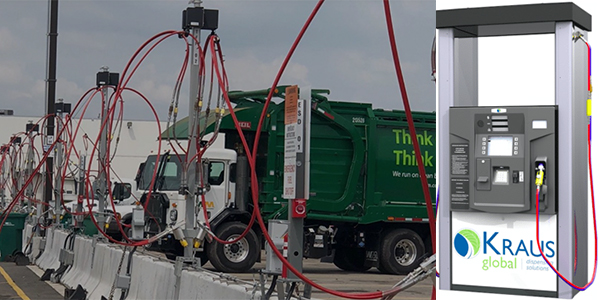 Kraus Global, Inc. has played, and continues to play, a major role in the evolution of the transportation fuel industry. One of the most visible ways involves consumers’ filling station experiences. Gone are the days when a uniformed attendant wiped your windows while dispensing gas into your vehicle’s tank. He’s gone the way of the dinosaur that’s become part of the fossil fuels we consume. Now, everything is self-serve, a concept that Kraus helped pioneer.

The Winnipeg, Manitoba company placed itself on the road map when it helped innovate self-service technology with its proprietary Micon sequencing head, a computerized device that tells customers all they need to know about what they’re putting in their vehicle. “It’s the ‘brains’ of a fuel dispenser,” says Scott Bailey, vice president of sales for Kraus. “Its electronics compute sales based on inputs such as pressure, temperature and volume.”

In other words, the device tells you how much gas you’re pumping and how much it’s costing. These days, with gas prices breaching the $3-per-gallon mark across the country, the electronic numbers it displays tend to speed by quite fast. This current at-the-pump situation points to another area where Kraus excels. With gas prices rising, the world has begun focusing on alternative fuel sources, in order to decrease a deleterious dependency on the shrinking oil supply. Today, Kraus Global is an international leader in the alternative fuels industry.

The company’s name, Kraus Global, reflects its widespread international activities. It has more than 3,000 dispensers in operation around the world. From the Basement to the Boardroom

The company’s substantial growth and move into the international arena is attributable to the vision of one man, Hans Kraus, who emigrated from Germany to Canada and started the business in 1962. “He specialized in electronics and pretty much started it in his basement, where he developed his first product, the Micon, which started the company on its way to what it has become today,” says Bailey.

Since then, the Micon has become a standard piece of equipment, one that competitors even use to develop their own dispensers. Kraus’ next major product was an automatic temperature compensation device. “It was designed so that no matter the temperature outside, you’d still get the same energy content of fuel inside your tank,” says Bailey. “It proved a very successful product, and the revenue it generated enabled us to move into the alternative fuel market.”

This was in the early 1990s, and the prescient Hans Kraus recognized that the alternative fuel market would only grow larger. As such, he began developing equipment to supply alternative fuels, namely LPG dispensers and CNG refueling station equipment. “The heart of a CNG refueling station is the compressor package that takes natural gas from a pipeline and compresses it to very a high pressure,” says Bailey. “The compressed natural gas can then be stored or put into a vehicle via a dispenser.”

However, along the way, the company, which, by this time, was called Kraus Group, Inc., encountered a significant roadblock. When Kraus passed away in 1996, he left the company to his son, who sold it to the RNG Group of Toronto in 1998. When that company’s fortunes failed in 2002, the Kraus Group shut down. But the situation proved temporary. In May of that year, six Kraus managers combined their financial resources with a venture capital firm and bought the company out of receivership. Since then, the company, renamed Kraus Global Inc., went on its successful way.

Revitalized and Redirected
The company continued in the direction of alternative fuels, intending to target products toward North America but in the mid to late 1990s recognized the U.S. interest in alternative energy sources was not expanding as rapidly as first thought.

The U.S. now comprising a small part of its plan, Kraus adopted a more global perspective, focusing on countries with more forward-thinking administrations that supported development of alternative fuel usage. “As a result, the company continued to grow,” reports Bailey. Around the same time Kraus Global was accruing major installations in China, Egypt, Turkey, Germany, Mexico, Korea, India, Thailand, Pakistan, Peru, and Chile. International activity included several significant projects and milestones such as the largest CNG bus stations in the world in Mexico, a comprehensive LPG refueling infrastructure in Turkey, the first indoor CNG bus refueling facility in the world in London, Ontario, and an innovative CNG infrastructure in Beijing, China.

Bailey indicates that natural gas use is particularly significant in Asia, where government interest is driven by the high price of oil. “Countries in that region are heavy net importers of oil, but they also have a large supply of indigenous natural gas,” he reports. “So, governments are looking to save money by reducing oil imports and using their own natural gas supply, as oil is getting very expensive while the price of natural gas is low. In those areas, there’s a strong incentive to convert vehicles to natural gas.”

So, the biggest driving force is economics. But politics is another major motivating factor, albeit to a lesser degree, as some governments are expressing environmental concerns and are seeking to reduce emissions. Either way, Kraus Global is well positioned to meet all demands in an alternative fuels market.

Expertise and Equipment
Kraus Global managed to place itself in such an advantageous position by developing the necessary technology and expertise. An ISO 9001:2000 company and a fully integrated manufacturer, Kraus can deliver turnkey systems for a variety of components to customers around the world.

Committed to research and development, the company’s specialties include microcontroller-based software development, and high-pressure gas systems, as well as refueling station design and engineering services. Arguably, one of the most important pieces of equipment in a CNG refueling station is the dispenser. Kraus is currently the largest manufacture in North America of alternative fuels dispensers and they are known worldwide for their reliability.

In addition, the company has staffed itself with highly skilled electronics, electrical and mechanical engineering teams. Its applications engineers provide customers with station engineering design services, while its technical specialists provide on-site commissioning, from installation to field performance testing, as well as training. As far as production, its single manufacturing site, located at its Winnipeg headquarters, includes one of the largest dedicated CNG/LPG test facilities in the world, capable of full load run testing of all compression and dispensing equipment on natural gas and propane at operating conditions. Customers also are invited to witness the pre-delivery testing.

If all of that isn’t enough, Kraus Global will begin providing a brand new Micon 500 Dispenser Register this summer, an advance over its original Micon product that started it all.

“We develop our new products along the old product lines, continually upgrading and enhancing them with new features,” says Bailey. “We’re continually looking for new and innovative ways to drive improvements in both our product lines and business strategy so that we continue to be a leader in the global alternative fuels market.”

Toward Hydrogen
Besides improving on existing products, Kraus Global keeps an eye cocked toward new opportunities, in particular the use of hydrogen as another alternative fuel source. The company has developed retail-style compressed hydrogen dispensers for dispensing hydrogen into fuel-cell vehicles at retail stations and for private fleets.

The company remains involved in hydrogen demonstration projects, “although it’s 15 or 20 years away before you or I are driving around in a fuel cell vehicle,” Bailey notes.

Bailey adds that natural gas should serve as a bridge toward hydrogen. “The station infrastructure is already out there,” he says. “It wouldn’t take much to convert those stations to hydrogen. But hydrogen fuel cells are extremely expensive. The price will have to come way down before hydrogen is remotely viable.” Even so, that hasn’t stopped Kraus Global from developing and installing hydrogen technology. “We placed the first-ever retail style hydrogen dispenser, in Germany at the Munich airport,” says Bailey. This dispenser is still in use today refueling six dedicated H2 buses at the airport.

This retail-style dispenser provides fast-fill hydrogen dispensing. So, it could very well turn out that today’s filling-station experience, which seems hi-tech and innovative, will soon become another relic of the past, again, thanks to Kraus Global innovation.