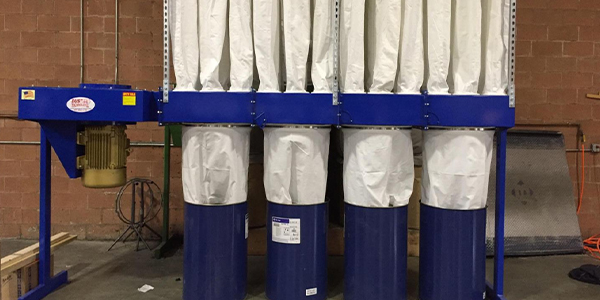 The new seven-step-filtration dust collection and vacuum system from Dust Technology LLC of Woburn, Mass., was originally designed to save the lives of postal workers, said Bryan Murphy, the company’s managing partner. Now Murphy envisions a much wider use for the compact, portable DT-APRS system, which filters particles to .30 micron (larger than .3 micron are filtered out). APRS stands for airborne particle removal system.

The Dust Technology team developed the DT-APRS and applied for patents on the system two years ago in response to a request from local United States Post Office personnel. Officials there were worried about anthrax detection and filtration.

“The post office asked us what it should do in terms of filtration, because of anthrax,” Murphy said. “We took one of our standard machines used for filtration in the wood and plastics industry and made several dramatic design changes then we compacted the entire design.”

The DT-APRS pulls air from a factory or facility through a fan housing and into a cy-clone separator that in-cludes a vortex generator. This is where bulk waste is separated from the air and collected in the bottom of the cyclone separator for easy removal. The air – with large particles now removed – is then filtered through two layers of patented fabric media, which separates out particles to .5 micron. From there, the filtered air passes through four layers of HEPA filters, which remove particulate larger than .3 micron. The filtered air is then returned to the factory or facility.

The unit stands 90 inches tall and is 11 feet long by 29 inches wide, perfect for smaller facilities or for portable use in places where filtration systems are only sometimes needed or may have to occasionally be relocated, Murphy said.

“We designed this to be life saving and also to fit into certain postal facilities,” he said.

The Dust Technology system can also be outfitted to include sensors that continually test particulate for the presence of harmful agents like anthrax. If the sensor detects anthrax, it triggers an alarm that alerts workers to the harmful chemicals in the air. It also activates a sprayer housed inside the system, which pumps a solution into the filtered air and the collected particulate.

“This solution neutralizes the effects of anthrax in the dust collector. So when you turn off the collector trained personnel can remove the filters and dispose of them properly.” Murphy said. “This process greatly reduces the contamination and exposure levels.”

Range of collection possibilities
Dust Technology has had meetings with the U.S. Post Office in Virginia and the top three major automated postal equipment manufactures in the United States. All have seen a presentation and are considering Dust Technology’s patent-pending DT-APRS. Murphy and his team have been busy in the meantime, and have determined the system has many more uses than anthrax filtration and detection.

In fact, the DT-APRS has been in place since February at M/A-Com-Tyco in Lowell, Mass., a high-volume manufacturer of radio frequency, microwave and millimeter wave semiconductors, components and technologies for use in cell phones and radio frequency devices like scanners.

“In this particular operation, their machining and fabricating operation, they fabricate a piece of gallium arsenic, which is a cancerous carbon,” Murphy said. “They used a large, built-in filtration system, but the arsenic levels in the workers’ blood were climbing, so M/A-Com needed something that filtered the air better.”

After installing the DT-APRS system, M/A-Com executives continually monitored employees’ blood, along with the quality of the air within the room itself and found the arsenic levels dropped dramatically within two months, Murphy said.

“Within 60 days, M/A-Com noticed the air was cleaner, the unit was running quieter than the old one and that power consumption was a third of the former system,” Murphy said.

Also, the filtration system does not require the use of make-up air, so power consumption is much less than with systems that pump make-up air back into a factory. Those types of systems discharge air outside the factory. With the air goes the heat/air conditioning. So make-up, filtered air needs to be heated or cooled. The DT-APRS system is described as an internal return system. The air is filtered to exceedingly safe levels and discharged from the cabinet right back into the factory. It doesn’t need to be heated because it remains at the same temperature. Most DT-APRS systems could pay for themselves through heat/cooling loss savings alone. “Your utilities savings is very dramatic,” Murphy said.

Esoteric and not so esoteric markets
He envisions other markets for the DT-APRS. For instance, at its 6,000-square-foot factory, Dust Technology already makes seven models of dust collection and related equipment for the wood and plastics industries. Wood and plastics operations that create particularly fine particulate would appreciate the seven-layers of filtration the DT-APRS offers. The small system would certainly be useful in portable clean rooms or for companies that rent clean rooms for the duration of a particular project. The dust-collection system can be easily moved between clean rooms, Murphy said. Not only is it small, it uses a stand-alone portable pump that is easily attached to duct work and piping.

“You can use it for applications where there is physical, shovel-it-up dust and you can also hook it up to a clean-room application at the same time where you’re filtering almost microscopic dust,” Murphy said. “The device is almost unlimited for its holding power. It holds bulk waste and fine waste.”

In addition, the U.S. Army might make use of the dust collection system for its portable camps. The camps can be quickly set up in the desert and other locations and are often supplied with air conditioners powered by generators. The same type of generators could power the dust-collection system, which is small enough to be trucked to the portable camp and connected to the medical tent, Murphy said.

“Use a generator to fire it up and suddenly, in the middle of the desert, you have a pristine laboratory suitable for open heart surgery,” he said.

The system could also continually filter a tent or building in order to provide a clean, safe environment that Army troops could run to if they were exposed to gases or chemical agents in the air. Murphy is prepared to talk about these applications with companies that supply portable barracks and camps to the U.S. Army.

Because Dust Technology buys component parts and assembles its dust collectors in-house, the seven other collection models the company sells can be shipped within two to three days from order. But the DT-APRS is made to order from a multitude of complicated parts. Delivery time for that model is about eight weeks. Custom-izable options include a cleansing pump to neutralize chemical agents, automatic shut-off valves and an internal fire suppression system. The system fills a much-needed market space, Murphy said. “The limits to what it can do in terms of filtration are just endless,” he said.