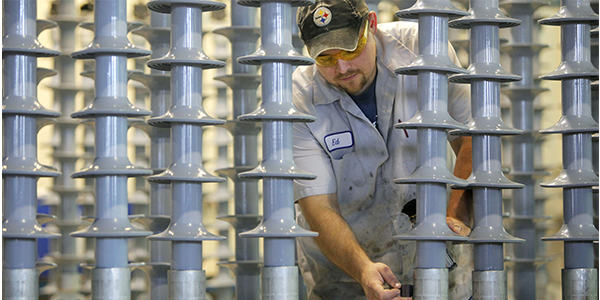 We see these purveyors of power every day. Pillars of the necessities of modern life, electric transmission towers reliably transport voltage from distant sources to bring whatever power we need to our very fingertips — whether it’s for switching on a light, setting the stove for the family dinner or putting our personal computers in gear to prepare for another day’s work.

What we don’t see are the high-voltage insulators that protect these towers from conducting the electricity carried in the transmission conductor wires, and the substation equipment on the ground behind the scenes. Thanks to a company headquartered in the heart of western New York State, electric transmission and distribution towers and substation switching equipment reliably transport electricity throughout our nation. “Our high-performance electrical porcelain products enable the safe transportation of electricity through our environment — from the generation source to the point of usage,” says Yavuz Erkan, vice president and general manager of Lapp Insulator Company LLC.

Lapp is the leading North American manufacturer and supplier of high-voltage porcelain insulator and bushing products, which it sells primarily to the electric utility industry worldwide. “Our products are used in all facets of transporting electricity to end users, whether they are commercial or industrial facilities or private residences,” says Erkan. Among Lapp’s largest customers are some of the country’s best-known suppliers of electricity — companies like New York’s Con Edison, Florida’s Florida Power & Light and California’s Pacific Gas & Electric.

From the Ground Up
John S. Lapp, a pioneer in the design and manufacture of high-voltage insulators, founded the company in 1916. Today, 85 years later, the company is well on its way to becoming a global leader with its recent acquisition of the 322,000 square-foot HV Insulator Division of CeramTec AG in Wunsiedel, Germany. This operation will be a wholly owned subsidiary known as Lapp Insulator GmbH. The purchase immediately establishes Lapp as the world’s third-largest supplier in terms of total insulator sales. It also places Lapp as the world’s second-largest supplier of porcelain insulators.

“The acquisition gives us a greater basket of products to offer the industry, which will enable us to provide better value to our global customers,” says Erkan. It also promotes the interchange of Lapp’s products into the European market and Lapp GmbH’s products into the North American market. “Our German factory manufactures a product we don’t have in our U.S. product portfolio. It’s a composite insulator made of silicone rubber, rather than porcelain, and is accepted for use in similar electrical applications,” Erkan continues. “So this acquisition means our company will be a one-stop provider of insulator products and services in North America, adding even more value to our customers’ supply chain because of the minimized administration costs involved in having only one supplier.”

Lapp GmbH’s composite, or polymer, insulators are lighter in weight than porcelain insulators. “They are now the insulator of choice for the new construction of transmission and distribution lines because they are easier to install and they are cheaper from the point of purchase,” Erkan says. “Lapp now has a vehicle to access that segment of the market.” The acquisition also enhances Lapp’s leading position in the worldwide industry, allowing it to easily accommodate both segments of the electrical transmission and distribution industry: maintenance and new construction.

Greater than the Sum
From a global perspective, the acquisition will reap enormous marketing potential for both companies. Lapp already had an impressive network of national (80 percent of its business) and international (20 percent of its business) distribution of its products prior to the acquisition, selling throughout North America and exporting to some 55 countries. Erkan notes that because of the expected growth of electrical infrastructures in the United States, the industry is experiencing a renewed interest in ANSI standard insulators and bushings among the world’s equipment and transformer manufacturers. “As our domestic market grows, so will the international market. We plan to sell more Lapp products into the European and Asian markets,” he says.

“Not only do we have all products available for all segments of the market, but we are also a full-line service provider,” continues Erkan. Lapp’s capabilities to provide technical assistance and after-sale services offer even more value-added interest to customers. “Our competitors in the U.S. don’t have the same depth of products we offer — nor do they provide similar pre- and after-market services — which positively distinguishes us from our competitors. We are the market leader in North America with a few other smaller domestic players chasing us — in addition to offshore manufacturers trying to get a foothold in the U.S. market,” Erkan says.

Lapp’s global headquarters and two manufacturing facilities, totaling about 672,000 square feet, are located in LeRoy, N.Y., which is midway between Buffalo and Rochester. Both the substation porcelain division and the bushing division are located in LeRoy. A 162,000 square-foot manufacturing facility in Sandersville, Ga., houses Lapp’s transmission and distribution division. The company employs about 600 people in North America, and about 220 in its German subsidiary.

Customers often refer to the company as the most progressive porcelain manufacturing plant in North America, says Erkan. The ISO 9001-certified company uses work-cell production flow processes and state-of-the-art pug mills and kilns. In 1999, Lapp’s upper management completed a company buyout. “We are now a locally owned and operated company, and all of the owners of the company are actively involved in the business,” says Erkan. “We are 100 percent committed to our stakeholders, which include our customers, employees and our community.”

Charged Future
In terms of future development, Lapp’s plans do not include building more manufacturing space. “We will focus on better utilization of our facilities in North America and better management and productivity techniques that will allow us to continue to grow as we expect,” says Erkan. He adds that the company continually develops product and process improvement methods to ensure its competitiveness in the marketplace.

“The energy sector in the U.S. is what we call a ‘hot space,’” Erkan explains. “There’s a lot activity in this sector because the Bush administration is committed to developing additional supply over the next decade, and we feel the market will be strong over the next five years or so. This will fuel our growth, and this is what led to the acquisition. It will allow us to meet the increasing demand for our combined products.”

Lapp plans to continue to be the manufacturer of choice and the industry leader in North America. The company’s dedication to its customers is evident in its recent launch of Web-enhanced services found at www.lappinsulator.com. “Our customers can get the public information they require on our products and their application, on technical reports, on handling issues, on product specifications and on general company news updates,” says Erkan.

“We are a full-line supplier of insulator and bushing products, and we offer a wide range of value-added services to the electrical utility industry,” he continues. “Our recent investment in Lapp GmbH further substantiates our commitment to remain as a key value provider to the industry, as we have been over the last 85 years.”