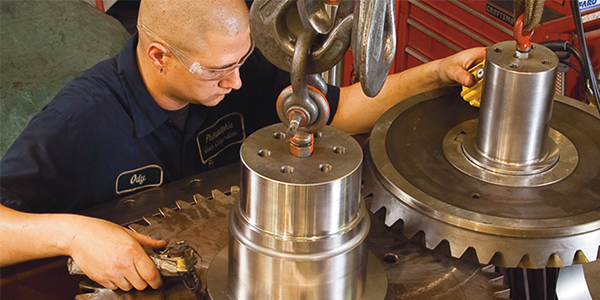 To say that the success of Smith Services has been incredible would be an understatement. Saying that same success was easily achieved would be an even bigger one.

Several decades ago, company founder E.T. Smith was a young, eager employee of General Electric with a lot of bright ideas in his head. Those ideas, however, had to wait because work needed to be done. So it would go each day as he picked up his mop and pail, and walked down the hall to continue the daily duties. That’s right. The founder of Smith Services started out as the janitor at GE.

Ambition creates its own momentum, and it wasn’t long before Smith saw that a specific niche wasn’t being served in the electrical services market. So, as the legend goes, he started the company that would eventually become Smith Services with little more than pocket change and a Volkswagen. By age 36, he had made his first million dollars. In 1982, he finally incorporated the company that is known today as Smith Services.

The success of Smith Services is due largely in part to its ability to identify its market and the individual needs of its clients. Rodney Toney, marketing and sales manager, says, “Our main service is electrical motor repair, but we didn’t stop there. It’s not enough for us to merely provide a good service. We have created ways to double and triple the benefits for our customers by making that same service more efficient, faster and cost-effective.”

High-capacity Repair
Service for electrical motors can either be done on site or at one of the Smith Services facilities. The immense size of an electrical motor might limit the capabilities of other companies, but Smith Services has a crane with a lifting capacity of 1 to 130 tons. The company also provides complete electrical and mechanical repair of rotating equipment through 35,000 horsepower. Whether service is done in the field or at a service center, a fleet of more than 100 vehicles is readily available to get your motor where it needs to go, complete with high flats and low-boy trailers with 50-ton capacity.

Clients in the paper, steel, mining and power generation industry have all benefited from the tailored expertise of Smith Services. The company provides comprehensive services through a number of departments that include electronics, construction, classroom training, AC/DC equipment consultation, breakers/switchgears and coil manufacturing. In addition, says Toney, “Our machine shop is quite extensive. It houses 12 machine lathes and three bridge-port mills. Our horizontal presses have a 600-ton capacity. We also electroplate shaft and housing surfaces, repair Babbitt hearings and can use a boring mill through 10 feet.”

An Apple A Day
Smith Services believes that the same rules of good physical health apply to good business health. That rule would be that thorough prevention efforts, applied regularly over time, save downtime and money, and keep a business running longer and healthier.

“We really enjoy reducing costs for clients,” says Toney. “I guess you could say that we are the doctors of the industry. We’ve developed a computerized assisted predictive maintenance system (CAPM) that forecasts problems and stops them before they can affect production.” The CAPM system scans for problems in a variety of areas. It then addresses those issues in a number of ways that includes vibration analysis, motor circuit testing, precision balancing, laser alignment, rigging motors, turn and undercutting of large armatures, and dry-ice or solvent-based cleaning.

Even the CAPM system is specialized to a client’s needs. “There will be different maintenance plans for different industries,” explains Toney. “A machine’s usage rate depends on the industry that it is in. We will devise a preventative maintenance schedule based on a particular company’s product, operating environ-ment and production rate.”

It’s easy to see that Smith Services isn’t a “one size fits all” company. Its tailored services and solutions are available 24 hours a day, seven days a week, at its three facilities.

The company’s corporate headquarters are located in Princeton, W.V., with other service centers in Mobile, Ala., and Sumter, S.C. A new 180,000 square-foot service center just celebrated its grand opening in the Princeton location this past September. The opening of the Princeton plant made Smith Services the largest independent service organization under one roof in the United States. This now gives the company more than 300,000 square feet of total service space.

In 1982, E.T. Smith had just 11 employees carrying his dream. Today, Smith Services employs more than 300 people and has expanded its services into 17 states. The plans for growth don’t end there. “We’re definitely looking to expand into even more states,” comments Toney. Even as the company is growing at nearly 20 percent a year, Toney speaks humbly about its phenomenal growth in regard to its competitors. “It isn’t our intention to move into areas and shut down the local shops,” he says. “We’re more interested in meeting specialized needs in other areas where, maybe, certain needed services aren’t even available.”

Regardless of the flexibility in the economy recently, Smith Services has remained rock solid in profit progression and client acquisitions. Since most of its customers are in the paper-mill, steel, mining and utility industries, it seems that the company has hedged its bets on a future of prosperity. With solid service and the reputation to back it up, it’s easy to see why success has smiled on Smith Services. It’s good to know that the future looks bright for a company that’s working around the clock to keep industry humming.