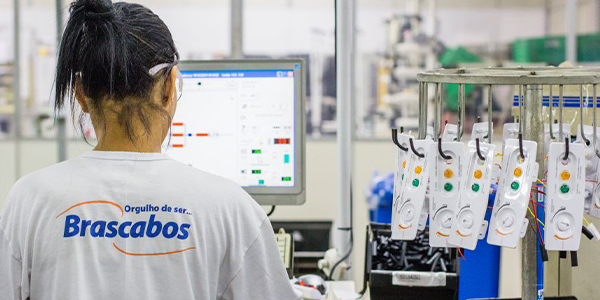 With facilities in the cities of Rio Claro, in the state of Sao Paulo, and Manaus, the capital of the state of Amazonas, BRASCABOS is an outstanding example of the capacity to understand customer needs and to devise effective solutions. The success of BRASCABOS has a lot to do with the comprehensive concepts that underlie all the activities of the company.

The company’s Board of Directors is located in the facility of Rio Claro, in an area of 11,200 square meters. Along with the Manaus facility, BRASCABOS is able to produce 20 million units assembly printed circuit board; one million power cord-connector cords and more than five million electric nets. As important as the numbers may be, the impressive figures of BRASCABOS should be seen as the results of strong teamwork and a fierce determination to accomplish goals. Blending passion to do the work and sensibility to understand what customers need, to be the number one in its field, for BRASCABOS, is nothing but a predictable consequence.

The enthusiasm with which everyone works in BRASCABOS and the pleasant environment created by the company enabled it to be recognized in Brazil the best company to work with during the last three years.

PRODUCTION PROCESS
BRASCABOS begins its production process with 1.46 millimeter copper filaments. These copper filaments are then transformed into connector chords, harnesses and cables with connector.

In turn, those pieces are utilized in the production of electric nets and power chords. The materials and components needed are acquired from many specialized suppliers, such as Tyco, Molex, Caraiba Metais, Dupont and GE as well as Karina, FCI, 3M and Hellermann.

After manufacturing a set with all the necessary parts, the electric nets are made in such a way that they can undergo thorough testing. Doing so, BRASCABOS can assure the client that all products passed through a quality analysis. In order to deliver its products with the guaranteed quality and on time, BRASCABOS uses the “kanban” system, delivering the products to the client’s assembly line.

HISTORY
The roots of BRASCABOS are linked with the construction of a BRASTEMP unit, today a part of the Whirlpool Corporation, in the city of Rio Claro. BRASCABOS was born in 1985 in order to educate BRASTEMP personnel in the concepts known today as lean manufacturing.

The idea that first defined BRASCABOS was to produce electrical nets for the BRASMOTOR group, owner of BRASTEMP, as a pilot unit of the latter. After starting to provide exclusively for BRASTEMP, BRASCABOS became the supplier for other companies owned by the BRASMOTOR group and for EMBRACO, the world’s number-one producer of hermetic compressors.

A few years later, in 1992, as a result of its remarkable growth, BRASCABOS Componentes Eletricos E Electronics Ltda. became autonomous, and started to produce electrical systems and power chords not only for national companies linked to BRASMOTOR, but also for the international market.

With the autonomy, BRASCABOS found new customers in different fields and, what’s even more important, started making new products. To give an example of what happened after 1992, BRASCABOS began to export shielded wire assemblies for companies in the USA and Europe to IBM. In South America, electronic systems from BRASCABOS were distributed to several electronic appliances industries around the continent.

Taking advantage of the new panorama, BRASCABOS opened the facility in Manaus with its sights focused on the air-conditioner and microwave market. Having more versatility regarding clients as well as products has made the company stronger and not susceptible to market ups and downs.

ALWAYS IMPROVING
In order to comply with present and future demands, BRASCABOS improved the working conditions of its employees while it upgraded its machinery to achieve a higher level of automation. The objective was to create production flexibility and to increase its production capacity in accordance with actual needs. The company’s vast array of clients and the capability to accelerate its production pace when needed are clear markers of BRASCABOS high level of versatility.

All of BRASCABOS efforts can be seen in the company’s extraordinary rate of growth, an average 15 percent each year during the last 10 years. According to Francisco Fiorotto, “Our leadership in the market was acquired through quality, punctuality and flexibility delivering our products. It has permitted us to be the exclusive supplier for client like Whirlpool Latin America, among others, for the last fifteen years.”

BRASCABOS reliability goes along with company’s astounding talent for innovation. Fiorotto explains, “We offer engineering services for development of electric systems to our clients. We help to reduce the final costs and simplify the assembly of the product.”

THE BRASCABOS DIFFERENCE
The expertise accumulated during 15 years of designing and manufacturing electric nets, always listening and learning with clients, has made BRASCABOS different from other companies in the field. All of this could not be enough, though, without the constant improvement of the techniques that are utilized in the process of production. The utilization of programs such as Pro-Engineering and Pro-Cabling in the execution of the projects as well as in the preparation of the production processes leave no doubt about the company’s commitment to improvement.

According to Fiorotto, “Our production system uses highly automated processes, so that we have process control over all the relevant points. We have achieved this by using production resources such as task instruction sheet, safety instruction sheet, anomaly report, control chart, process audit and total quality control.”

Not surprisingly, the clients can feel the difference. According to Fiorotto, “We take care of the supply for the assembly lines of our clients. The consequence of the high quality of our work is the recognition of our clients.”

RESPONSIBILITY AND GENEROSITY
To build up a good name and receive recognition from both the local and the international community may be as challenging an objective as providing high quality products.

RASCABOS’ awareness of this fact has led the company to manage many social projects that aim to help the development of underprivileged communities.

One example of that effort is the Social Responsibility Program developed by BRASCABOS. The project was put in place through a school that is open to the public, and is designed to offer classes to more than 120 homeless children. There, the children learn about music, theater, citizenship, sports and craftsmanship, and attend lectures to make them aware of the dangers of violence, guns and drugs.

Sharing the benefits of being the most important company in the region has enabled the community to embrace BRASCABOS. In this way, the company’s way of doing business inspires employees as well as the community at large.