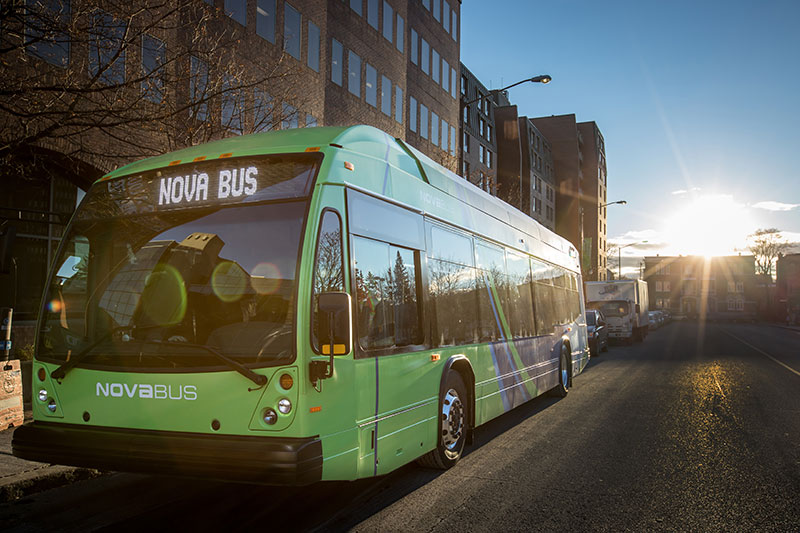 Last September, Nova Bus was awarded a contract by the Montreal transit authority STM (Société de transport de Montréal) to deliver four fully electric 40-foot LFSe buses by the end of this year to replace its diesel powered vehicles. Previously in 2017, three quick-charge electric buses provided by Nova Bus were put into service as part of the Montreal City Mobility project, a joint initiative by STM and the Quebec government.

Quick charge buses are designed to travel short distances, while slow-charge systems can go farther distances on a single charge. Both can be ideal for city transit systems that either have, or are willing to commit to, the necessary infrastructure to support electrification.

“We are proud to be a leader in the field,” says Martin Larose, vice president and general manager, pointing to the positive usage and performance statistics of the project, as well as the initiative’s commitment to sustainable public transit. Since May 2017, the first electric Nova Bus vehicles traveled some 62,000 miles and have undergone more than 11,000 quick charges, demonstrating the ability of both the performance of the quick-charge stations as well as the robustness of the buses to perform under extreme weather conditions.

“The Nova Bus LFSe has elicited a great deal of enthusiasm and interest from both the public as well as the drivers. People particularly enjoy the comfortable rise and the silent operation,” Larose points out. An additional benefit is that with fewer mechanical components, the buses require less maintenance, which decreases repair costs and optimizes in-service road time.

Given these advantages, why aren’t all city transit systems converting to fully electric buses?

“There are a number of factors,” Larose explains. “One is you need an infrastructure that supports electric vehicles—that includes not only charging stations but also routes suited to how far a vehicle can safely travel on a single charge. It also depends on whether the customer has any history with alternative propulsion systems. Sometimes the attitude is we’ve always used fossil fuels, that’s what we’re comfortable with, so that’s what we like to use. Another is political will. Some cities and areas of the country are really pushing for green initiatives and have the funds available for them. California state and the province of Quebec in Canada are examples. Some cities on the east coast, in comparison, are not as assertive, either because they don’t have the budget or it’s not a primary concern for them. We expect that to change eventually as the lower operating costs of sustainable transit solutions become increasingly evident.”

That said, sustainable transit solutions are not limited to all-electric buses. Nova Bus also offers clean diesel, hybrid electric and natural gas platforms. All configurations come in 40- and 60-foot lengths (we do not offer Electric and Natural Gas on our 60ft model at this time). Stainless steel construction is fatigue and impact resistant, and does not require anti-corrosion treatment. In addition, lighter weight improves fuel efficiency as well as reduces maintenance costs.

Last year Nova Bus won contracts to deliver 55 hybrid electric vehicles to the Toronto Transit Commission, 350 clean-diesel buses over five years to the Maryland Department of Transportation and a five-year contract with Quebec’s collective transit authorities to deliver 497 40-foot hybrid buses, considering option year deliveries, this makes it the largest order in the history of the company.

Larose notes that the overall market for city buses in both Canada and the U.S. is relatively constant. Buses “The one big change we’re seeing is a switch from diesel towards electric. In our view, city bus systems are in a transition period where they’ll tend to move towards natural gas or hybrid. As battery technology gets better and customer see the results from pilot programs, we’ll see more transit systems sevolving towards all-electric. Right now we are in the phase of piloting and testing.”

Nova Bus is headquartered with manufacturing facilities in Sainte-Eustache, Quebec, Canada, a suburb of Montreal. However, Larose emphasizes, with a plant in Plattsburgh, New York dedicated to making buses for the lower 48 and a supply chain comprising local sourcing, Nova Bus meets all the requirements of a Made in U.S. manufacturer.

Nova Bus has a total workforce of 1600 in both countries. “Here in Quebec we have employees with 10 to 20 years or more service,” Larose notes. “We opened the Plattsburgh assembly plant in 2009 and there’s a lot of competition in the area for labor. In the white collar category we can find engineers and designers and similar skilled people with automotive experience. The blue collar segment is more challenging. Unlike automotive, bus manufacturing is low volume. Every one of our buses, even if it is part of a large order from a single customer, is made to order. There’s a lot of skilled labor involved, particularly in areas such as welding. So having the people in place to build our buses properly is important.”

He emphasizes, “We’re making buses, but it’s more than a bus, it’s part of a total transit solution. Each bus not only has to meet the unique requirements of the customer and specified use, but also integrate into the transit infrastructure.”

In addition, the technological innovation upon which Nova Bus has built its reputation extends beyond the propulsion system. “Today’s buses have infotainment screens, comfort, wi-fi and other complicated intelligent systems on board. These are no longer convenience or specialized features, but what everyday riders have come to expect,” Larose notes. “Some of our veteran employees have remarked that the amount of wiring that now goes into a bus was unheard of ten years ago.”

Larose points out that as part of the Volvo Group, Nova Bus has both extensive financial and technological resources. “We employ global technology from a world leading organization, providing tailored solutions backed by industry leading parts and service support. Most importantly, we make highly rugged vehicles that perform in highly rugged environments that are fuel- and cost-efficient to operate.”