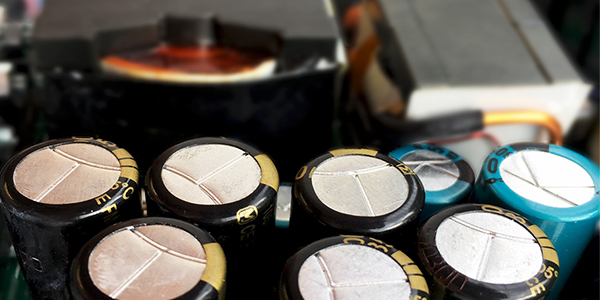 William Dubilier predicted that every car would have a portable wireless telephone to call for help in case of a breakdown. That was in 1908. By 1912 the young Californian had developed a wireless phone with a range of about 50 miles. Although the cell phone did not become a consumer item until much later, Dubilier’s ideas and inventions, such as the first commercially produced mica capacitor, revolutionized radio broadcast transmissions allowing better transmission over longer distance. In time, Dubilier patented hundreds of capacitors. The devices, found in every electronic device, store and release electrical power with the controlled discharge that a battery alone cannot achieve. (Think of the flash on your camera, which stores energy in order to release it all at once.)

Dubilier started manufacturing capacitors (then known as condensers) in 1909 in a company he started in Seattle. He contributed to World War I by developing a system to detect submarines. In 1933, the Dubilier Company joined forces with Cornell Electric Manufacturing Company to form Cornell Dubilier Electric. As radio and television broadcasting developed, the company grew. But even greater expansion came with the company’s production of electrical components during World War II.

By 1966, the inventor amassed more than 350 patents in radio and electrical sciences. The company also made filters, power supplies, auto and TV antennae, and other products. It was one of the first companies to recognize the value of globalization and had plants in Taiwan and Mexico in the early 1960s.

Over time, the company grew by acquisition to become one of the largest capacitor makers. The business became a subsidiary of Reliance Electric, owned by Exxon. In 1983, a group of managers bought the firm, recharged its sales efforts, and revitalized the organization while stressing the company’s competitive edge – its reputation for quality and wide range of passive components. Today, Cornell Dubilier Electronics remains a key global supplier to the industrial electronics sector.

A “Nichey” Philosophy
The Cornell Dubilier Electronics story is a parable of American business past, present and future as a company focused on quality adapts to survive in the cut-rate global marketplace. The bottom line is that most capacitors are commodity items pumped out overseas for a third of a cent and used in cheap consumer goods. But the company that bears the name of the technology’s innovator has found a way to rise to the top.

“Our hallmark is really that almost all of our capacitors are in industrial applications. We don’t do cell phones or laptops,” says Jim Kaplan, president of Cornell Dubilier’s Electric. “Most U.S. companies are not going to compete on cost and have to do it on either quality or some unique function of that product,” he explains. “For us maybe it’s an air conditioner that runs super quietly or a motor that will last 20 years to go in a submersible pump that can’t be replaced easily,” he says of two places you’d find the company’s durable and reliable capacitors. “That’s the only way we know to compete. It’s fortunate that we’re so nichey.”

Other competitive advantages for the company stem from solid contracts with OEMs plus a wide distribution network to serve smaller customers. “We have a lot of large OEMs and we service them well,” explains Mike Kaplan, Jim’s brother and president of Cornell Dubilier Marketing, which is the company’s largest manufacturing division. “It gives us purchasing power to translate into better margins for smaller customers where we have a huge distribution network to promote our products.”

The company’s catalog of tens of thousands of capacitors are thoroughly tested with years of data available to prove performance in real applications. “We are a quality house, we supply the military and we have credibility – plus we’ve been around for 100 years,” Jim Kaplan notes.

The devices for military applications exemplify the need for mind-boggling quality since capacitors in bombs and missiles must withstand 50,000 G forces, go through a concrete bunker and detonate on the other side.

“Any electronic component needs a capacitor,” Jim Kaplan says, citing the example of a UPS conversion system for backup computer power. “If your computer loses power, it will back it up long enough for the batteries to take over,” he explains. “The capacitor is needed because the batteries can’t get the energy out fast enough but the capacitors discharge quickly.”

Capacitors also filter energy to control power flow. This is especially important to sophisticated and sensitive devices like medical equipment such as defibrillators, MRIs, oxygen generators and X-ray equipment. “With electrical power, even though it says 110 volts are coming out of the line, it’s really not perfect. Spikes and bumps might result in 109.8 or 110.5 volts and those little ripples wreak havoc on super sensitive equipment,” he cautions.

Power Broker
At the same time that the company has found a market for high-end capacitors, competition from overseas is a tide that lowers all boats, placing the emphasis on cost and not quality. The company must keep the cost of its average part down to about $5.

To do so, Cornell Dubilier Electronics has acquired several companies recently including capacitor businesses in Indiana, Vermont, and corporate home South Carolina.

“Unfortunately, these plants couldn’t compete, were losing money and we had to shut them down,” Jim Kaplan regrets. He stresses that the company’s buyouts are done in an above-board way, notifying staff of the plan and providing a slow shut-down process with retraining and severance pay. “Some of the companies could not survive because they had only OEM customers without a distribution network,” Mike Kaplan explains. “They ended up reducing prices over the years to compete and a lot of volume with low margins equates to major losses.”

The businesses are being integrated into the company’s locations to reduce overhead while expanding capabilities, volumes, and sales. The company’s remaining four plants include 200,000 square feet in Liberty, South Carolina, where aluminum electrolytic capacitors are manufactured, representing about 50 percent of sales. Found in everything from heavy equipment to electronics, aluminum electrolytic capacitors are made by chemically etching high purity aluminum inside the capacitor for maximum electrical energy storage. Film capacitors, about 20 percent of sales, are produced in New Bedford, Mass. at a 400,000-square-foot plant and distribution center. Mica capacitors are made in Mexicali, Mexico where the company has about 120,000 square feet of production floor. “Customers typically buy from all the plants and need several types of capacitors and industrial components, so as we grow, we try to get more share of our current customers,” Jim Kaplan says.

The company also has an engineering office in China, a market that presents competition but also opportunity – now about five percent of the company’s sales.

“Our philosophy is you have to be the technical leader, the service leader and the quality leader,” Jim Kaplan says. “What drives that is our people. We hire the best people we can. We have virtually zero turnover, which helps in the long run because they are so good at what they do. So we keep overhead low and buy and grow within our existing facilities.”

As a result, the company enjoys a low turnover of its customers, too.