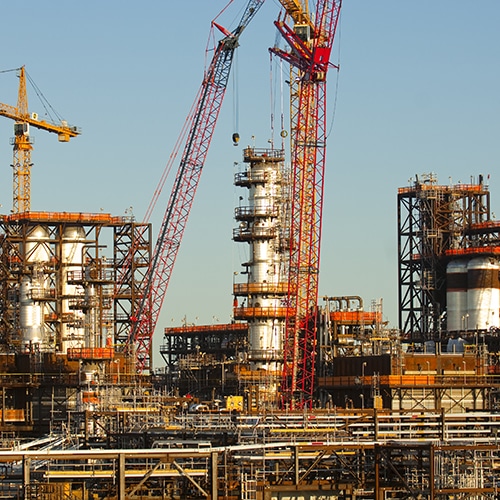 Bantrel, a Canadian EPC company, has designed and constructed some of the country’s largest and most complex energy related projects. Established 27 years ago, Bantrel demonstrates an enormous stride: One foot is firmly planted in the past while the other steps into the future.
“We remain very active in oil production in the oil sands sector, but we’ve recently expanded our portfolio into other energy markets,” says Mike Gordon, Bantrel’s vice president of business development.

The Calgary, Alberta-headquartered enterprise, as Gordon relates, is now focusing activities toward renewable energy sources such as wind, solar and hydro power and biofuels, as well as waste energy-based solutions, which involves creating power from municipal and organic wastes. Bantrel cooperates with parent company Bechtel Corporation in the pursuit of these initiatives.

OVERCOMING A FALSE START
After the company was established in 1983, it began pursuing emerging oil and gas industry opportunities in Canada, particularly in the Artic basin. “However, the envisioned work nevermaterialized, so we shifted our geographic and business focus toward Alberta,” says Gordon. “As that regional market grew, so did we.”

Eventually, Bantrel became Canada’s largest EPC (engineering, procurement and construction) focused company for energy projects. “At peak, we ran up about a billion dollars in annual gross revenues, and we currently have almost 4,000 employees in engineering and construction,” reports Gordon.

Bantrel has executed projects valued at more than $20 billion since 2000 and its project portfolio has contributed to almost a million barrels per day of production and refining capacity in Canada – a benchmark unmatched by its competitors. That 21st century success resulted from experienced senior management leadership and support from the EPC professionals that staff the company’s Calgary, Edmonton and Toronto locations. Bantrel is also bolstered by a wholly owned subsidiary: Bantrel Constructors Company, which was established in 2003.

Bantrel fostered relationships with some of the industry’s most capable and established names: Suncor, Shell, Imperial Oil and Conoco-Phillips, among others. These associations are both long-term and simultaneous, which is something Bantrel is very proud of, as the relationships placed Bantrel in a position to participate in projects both large and small and reinforced by the company’s reputation for innovation and project execution excellence.

RICH WITH RESOURCES
From its Calgary headquarters, Bantrel extends its reach across the globe, thanks to its affiliation with Bechtel Corporation, one of the world’s largest EPC organizations. “Bechtel is our parent company,” says Gordon. “So, when we execute projects, we’re able to utilize its resources including work processes, systems, tools and procedures. All of these elements have a proven track record on tens of thousands of Bechtel projects around the globe for over a century. As such, we deploy a successful, high-quality execution methodology on our own projects.”

Currently, the bulk of Bantrel’s business still comes from traditional clients, the major and aforementioned vertically integrated oil and gas companies, reports Gordon. He indicates a representative project that demonstrates his company’s strength and capabilities: The Shell Scotsford upgrader expansion project near Edmonton. For this prestigious assignment – currently one of Shell’s largest undertakings – Bantrel and Bechtel are providing complete EPCM services on all major units of the large oil sands project, while Bantrel Constructors Co. provides construction services for the utilities and offsite scope. The project was designed to increase processing capacity by 100,000 barrels a day.

“It’s a multi-billion dollar project, and Bantrel and Bechtel provided the overall management framework,” describes Gordon. “We engineered and purchased all of the material and equipment for the bulk of the process units. Also, the utilities and offsite silo represents about 40 percent of the construction work for the entire project.”

CORE VALUES
Besides the advantages that come with the Bechtel affiliation, Bantrel boasts several significant differentiators. One of the most important is its safety leadership and commitment. The company has garnered both client respect and industry recognition by protecting its people and work sites from accidents.

“We’re completely committed to safety in execution,” emphasizes Gordon. “Part of our operational goals is to ensure that our safety performance generates recognition by our customers and other external stakeholder organizations. This provides a degree of transparency that we feel is important to maintaining our social license to operate.”

In addition, the company protects its work sites from environmental incidents, which indicates another major commitment: environmental responsibility. It’s one of Bantrel’s core values, and the company’s dedication is underscored by a significant “first”: Bantrel was the world’s first EPC to be designated carbon-free by Carbonfund.org, a leader in the fight against global warming and an advocate of clean energy. “We’re one of the leading companies when it comes to environmental compliance,” says Gordon. “We believe that’s an attribute that makes us a good fit for the emerging ‘green’ economy.”

Then there is the company’s integrated EPC execution. Bantrel is able to self-perform all major aspects of EPC planning and implementation. Its integrated approach improves client performance, as its delivery model allows direct access and control of resources required for projects while minimizing third-party interfaces, according to the company.

Bantrel also uses the engineering resources available in other Bechtel offices located outside Canada when needed. “On large projects that stretch the resources of any one office, we can seamlessly transfer work to High Value Execution Centers, or HVECs, located in New Delhi, India and Shanghai, China. These offices use the same tools and processes as our Canadian operations and are very cost effective and efficient. More importantly though, they allow us to reduce the peak man-power demands in Canada” says Gordon.

Bantrel also has demonstrated technological excellence. Within its industry, it pioneered the use of 3D design systems and it employs state-of-the-art project design and management tools. Further, its energy expertise is second to none. Bantrel personnel specialize in petroleum refineries, bitumen production facilities and related process units, as well as power and alternative energy facilities. Its major markets include upstream and downstream petroleum, power generation, carbon capture and new energy.

The entire package is tied together with the ISO: 9001-certified company’s commitment to quality and continuous improvement. Part of Bantrel’s continuous improvement program is Six Sigma – a program that systematically and objectively looks at the cost of poor quality and utilizes quality management and statistical techniques to identify and enhance the manner in which a given work process is performing. While Six Sigma is widely used in the manufacturing sector, Bantrel is only one of two EPC companies in the world using Six Sigma. The other is Bechtel.

“We believe that all of our core values – the highest levels of safety and environmental commitment, optimal engineering, integrated EPC execution, our technology and expertise, and our quality commitment – are attributes highly conducive to supporting the development of the ‘green’ economy,” says Gordon.

GOING ‘GREEN’
Gordon says the company is moving in this direction because that’s where it sees long-term business growth. But it’s not just latching onto a trend. “We live in a changing world with many new emerging opportunities,” he observes. “But we’re not going to be an exploitive opportunist that seeks to gain advantage from legitimate national and global concerns.”

In other words, the shift not only makes good business sense but it’s also the right thing to do. “We approach emerging opportunities with integrity, and that speaks more to what Bantrel is all about better than what any company principal might have to say,” points out Gordon.

Further, Bantrel believes it possesses all of the appropriate transferable skills. “That’s a big part of the reason why our company has been able to diversify and continue to move forward,” says Gordon. “The new direction also will augment our existing position in the oils sands and refining areas. Even though tremendous opportunities exist with alternate forms of energy, there will not be a substantial decline in our existing market.”

Indeed, holding onto its past as it proceeds into the future will be the key to Bantrel’s growth.