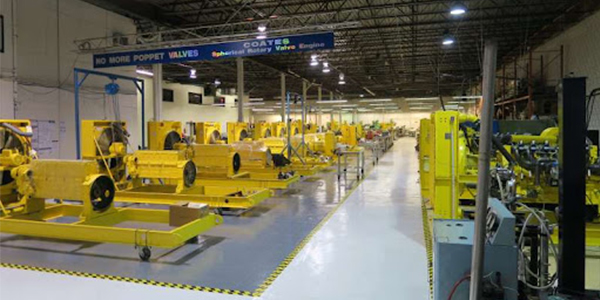 When Irish-native George Coates was a kid, he was always inventing things. Little did he know that one day one of his inventions would have the potential to revolutionize engine manufacturing and design.

Back in 1961, Coates, who worked as an engineer for Rolls-Royce, General Motors, Ford and Mercedes Benz, created a new valve system. You see, in the last 60’s and 70’s most vehicles combustion engines in the U.S. were running at a compression rate of 12 to 1, which resulted in engine efficiency of about 35 percent. The rest of the engine power was lost in friction, pumping and heat loss. When it was found that lead additives in fuel had an adverse effect on the environment, the lead was removed from the fuel. However, this caused the poppet valves and combustion chamber on the poppet valve engines to overheat, raising the temperature to in excess of 2500 degrees and damaging the poppet values.

The answer was to lower the compression ratio of all engines to 10 to 1 or lower, thus reducing efficiency of the combustion engine to approximately 24 percent. But the reduced efficiency also resulted in fewer miles per gallon, lower brake horsepower and lower torque.

George Coates thought there was a better way, created a handmade system and attached it to a European Ford engine. The results were promising. “My son Gregory and I had to struggle like hell to get to this point. We did the whole thing on $27 million alone. When one of the big three develops an engine they usually have upwards of $400 million,” says Coates, now president and chairman of the board of Coates International, Ltd. More hardships lay ahead in getting and applying for the patents and shoring up all the details. “The next steps were getting the castings made in the different places with the correct pieces and getting the design part of it and the compression ratios. And each engine has a different application which means you have to redesign it for each application,” explains Coates.

It would take 15 years for the running prototype and another five to fully develop the sealing mechanism. It would be worth the wait. Today, the Coates Spherical Rotary Valve Engine is being called the most advanced in the world, with the most positive valve system ever built.

A Company Born
In August 1988 Coates International Ltd. was created for the purpose of researching, patenting and manufacturing technology associated with the Coates’ spherical rotary valve system for internal combustion engines. The “Coates” system utilizes spherical valves, which rotate in a cavity formed between a two-piece cylinder head. The valves include channels, which connect to the intake and exhaust passages.

Speeding to Market
With the research and development phase now complete, Coates is gearing up for production and distribution of it s SCRV-powered engines. The company has also received several multi-million dollar orders for its spherical rotary valve system based automotive and natural gas engines.

CSRV-powered engines are capable of running in anything – cars, boats, motorcycles, buses – and on a number of different fuels, such as gasoline, natural gas, methanol, ethanol, hydrogen and diesel. Oil changes are extended to approximately 50,000 miles instead of every 3,000 miles; and in some cases oil changes are not necessary. Maintenance is drastically reduced. There is increased power and torque, reduced fuel consumption and dramatically reduced emissions.

“Coates has commenced production of its model C86GE natural gas engine and the C86GG natural gas generator system, both based on CSRV technology. We have also completed several engine prototypes equipped with its CSRV, five for automobiles and two for motorcycles. The most recent automobile prototype has been started over 7,000 times and has been road tested over 40,000 miles. The motorcycle engines were retrofitted for a major motorcycle manufacturer,” says Coates.

Realization & Roadblocks
Despite a revolutionary product and sound mission, there are still roadblocks. “We’ve had the big three here several times, but the problem is changing and educating the staff to the new technology. They would have to learn to make these new engines and it’s expensive to change. They’ve been doing the old engines for 60 years. And I’m afraid to say it but the U.S is a bit stuck in their ways. They know we have this technology, but movement has been slow. ” Coates predicts the first engines to use this technology will be in foreign overseas.