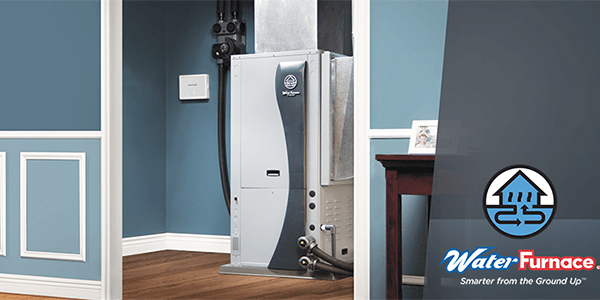 Everyone wants to be more energy efficient, and WaterFunace, a Fort Wayne, Ind., maker of geothermal heating and air conditioning systems, is well on its way to helping more people understand the inherent benefits of its energy-efficiant systems.

Unlike the increasingly popular heat pump, which acts as a condenser to draw energy from the air, but which requires conventional heating back-up when the air reaches a certain temperature, a geothermal system, as the name implies, directly taps the heat (thermal) contained in the rock and fluid beneath the earth (geo). And it works in both directions – you can take heat out of the earth to warm a space, or you can take heat out to cool a space and transfer that energy into the ground. Consequently, geothermal is more efficient and less costly to run than heat pumps, and even much more so than conventional forced air or electric systems.

Used in conjunction with electricity, it can provide unprecedented efficiency: For every unit of electricity the system uses, it provides four units of heating energy, giving a geothermal system a 400 percent efficiency rating on average. These numbers can translate into real savings ranging from 30 to 60 percent on utility bills year-round.

But, as Carl Huber, Vice President of Engineering and Quality, points out, “The payback is a safer, cleaner and more reliable space conditioning system that, over time, pays off that initial investment with dividends in continued operational savings.”

Of course, that was the argument back during the energy crisis of the 1970s, and while a number of alternative technologies, geothermal among them, sought to improve operational efficiency both as a way to decrease costs and to lower dependence on foreign energy sources, they didn’t gain widespread acceptance. Huber explains why today is different from then (besides the obvious advantage that no one today is wearing leisure suits). “Most of the residential equipment then required a ground water source from which to draw energy (ground loop pipe technology had not advanced to a reliable state). That meant having a water well or sizeable pond nearby, which didn’t really catch on with users who didn’t have easy access to water. At the time, commercial applications used internal building loops made of steel pipes in conjunction with boilers and cooling towers. Geothermal commercial buildings were very rare. ”

Huber adds, “But with rising fuel costs that lead to higher electricity rates, and particularly the rise in natural gas prices, we think the time may be coming where geothermal could become more mainstream. You can install the loops into the ground, either horizontally in trenches at around 125 feet per cooling ton of building load or, when available land surface is limited, vertical small-diameter bores that go down in the ground approximately 75 to 300 feet.”

Envision
Making geothermal even more attractive is WaterFurnace’s recent announcement of its new Envision Series product line, which incorporates the latest technological advances to achieve the highest efficiency of any geothermal equipment. “It’s a combination of high quality engineering with the best compressors, optimally performing fan motors and effective heat transfer surfaces and, hence, maximum efficiency,” Huber explains. “Eventually, we will move our entire product line to this technology.”

Huber notes that while Envision was announced only last August, dealer response has been highly positive. “When dealers get excited about something, they tend to buy more, and that’s what we’re seeing. Contractor acceptance has been excellent, and we’re only just beginning to roll the new product line out. As more systems get installed, word is going to get around that this really is the best performing technology on the market.”

He adds, “Right now we’re competing against conventional heating and air conditioning systems, which are less expensive, at least initially. But property owners are becoming more aware of energy efficiency, and we are seeing wider acceptance of the payback that you get from geothermal over time. Of course, we’re trying to educate our dealers and their customers – the contractors – on the advantages of geothermal. One indication of wider acceptance is that we’re seeing more geothermal retrofits to replace conventional heating, not just in new construction. People can do the math. And beside the potential cost savings, there’s also greater consciousness among consumers about the benefits of so-called `green’ technology. Geothermal is cleaner and better overall for the environment than conventional air-based or electric heating and air-conditioning systems. Some consumers will make a decision for geothermal based solely on that consideration.”

When competing head-to-head with other geothermal systems, Huber contends that WaterFurnace’s combination of technology and support is unbeatable. “The decision between one manufacturer and another isn’t necessarily cost-driven.” Huber says. “It’s who has got the best quality and support service? Who has the training in place to educate installers? Who has the lead times – typically two to four days – to deliver product as promised so construction schedules can proceed as planned? And the answer to all those questions is WaterFurnace.”

Huber points out that geothermal is not restricted by geography. “We sell systems in lower Canada, and we sell in the south western United States. Geothermal isn’t necessarily more popular in one region than another – it can work anywhere. The only thing geography can affect is the cost of installation. If you’re doing a ground system and you have mostly rocky terrain, installation is going to cost a little more since it’s harder to penetrate by drilling or digging. But the performance isn’t affected.”

Heated Sales
WaterFurnace was originally a heating ventilation and air conditioning (HVAC) distributor. “In 1985, we started getting interested in energy alternatives as well as higher quality equipment and we bought the base technology from a company that was looking to get out of the sector,” Huber says. “We grew from a company that generated a million dollars in sales to about five million in 1990. In 2006, we expect about $80 million. I’ve been here for the last 18 years, and there has been a constant upward trend that had resulted in considerable return to shareholders.”

The company has also grown from four employees in 1981 to 220 today. WaterFurnace does not directly manufacture its systems, rather it assembles components from suppliers. Assembly operations are conducted at Fort Wayne, where 90,000 square feet is allocated to production and another 20,000 square feet to general office and laboratory space.

WaterFurnace is trying to reduce its operational costs with techniques such as just-in-time inventory. “We’re trying to manage our vendors better and that involves talking to them about what we need and the best way we can work together to meet those needs. We’re not looking just for someone to provide us with components, we’re looking to establish long-term partnerships where we both benefit from our growth,” Huber says.

As energy prices continue to escalate, and consumers become more environmentally conscious, WaterFurnace envisions that geothermal will heat up to a nice comfortable temperature.