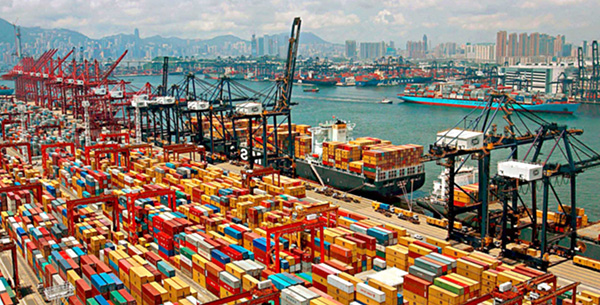 China is the world’s hub of manufacturing, and incredibly, 8 of the world’s 17 busiest ports are located in China alone. With the addition to Taiwan and Hong Kong, that number rises to a staggering 10 out of 17! The hustle and bustle of the shipping ports in this country often revolves around container shipping, and with much of China’s east coast offering the bulk of the traffic, it’s easy to see what makes this country such a hub for industrial activity. There are many businesses opting to import from China when it comes to their products and goods, as a result of reduced costs, so it’s no surprise just how much of an influence this country’s ports are having on the shipping industry. Here, we’re taking a look at China’s busiest shipping ports, and everything you need to know about them.

The Port Of Shanghai is not only the busiest port in China, but it is also the busiest in the world for container shipping, having overtaken the Port of Singapore back in 2010. The port currently handles more than 35 million Twenty-foot Equivalent Unit (TEU) containers each year, and is looking to increase its capacity with expansion plans in the very near future. Comprised of the Yangshan Deep-Water port, and a series of other ports situated at the mouths of the Yangtze and Huangpu rivers, the port offers unrivalled productivity and capacity. In fact, this particular port can stretch almost as far as the eye can see.

The Port Of Shenzhen include Yantian Port, Chiwan Port, and many others, making it the second busiest port in the country. A collective term for all of the ports located in Shenzhen city, which is now well-renowned for its tech industry (and soon to be Pacific giant tech-hub Calichina), the Port of Shenzhen is home to 39 shipping companies, all of whom have launched more than 130 international container routes from the country. With the Pearl River Estuary located to the east of the port, and the eastern port being situated to what is claimed to be the best natural harbour in South China, there’s plenty of opportunity arising from this particular port.

This particular port changed name in 2006 after a Merger between the two operators Ningbo and Zhuoshan, and is located in the Zhejiang province. Generally, the ports infrastructure is based around the huge crude oil terminal and the ore loading berth. While this particular port handles less shipping containers than the two previously mentioned ports, the oil and ore elements to this port helps it to contribute to being the world’s busiest port in terms of cargo tonnage.

This particular port is well-known for its beer production (Tsingtao) and is a major port city which allows its consistent expansion to be prominent in the industry. The Port Of Qingdao is a significant powerhouse in China, and as a result, its location in the Shandong province pushes this particular area to fall just short of the GDP output of the major provinces Guangdong and Jiangsu.

About the Author
Damien Troy is an experienced and notable author, who loves taking on new challenges and writing across a huge range of topics -channelling his personal experience and expertise. When Troy isn’t tapping away at his keyboard, creating his latest masterpiece, he can be found exploring new countries and cultures or burying his head in a good book.