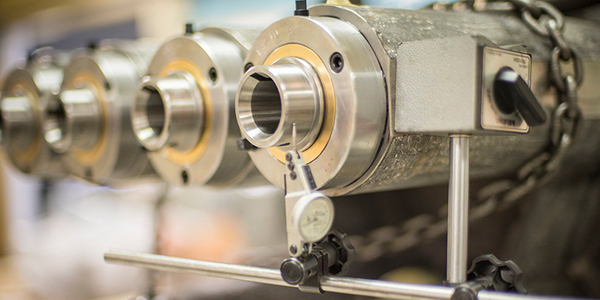 The EX-CELL-O Group coordinates its global activities from its central base in Germany, enabling it to successfully reach across the globe, offering complete turnkey solutions, modern machine-tool systems and highly innovative customer service. This approach to the modern market has meant that resources have been shared, enabling the EX-CELL-O Group to push forward its philosophy of presenting one face to the customer.

It is a reach that begins in Europe, crosses the Atlantic to Sterling Heights, Mich., and continues on to Asia. It encompasses a broad production line of machining centers for high-speed machining as well as heavy-duty cutting, modular transfer machines and systems and special machines.

The company’s products are used in the automotive industry, in the armature and pump industry, by manufacturers of heavy-duty diesel engines, compressors and electric motors. To serve these markets, EX-CELL-O has production facilities in Germany and Michigan. Optimal service support of its globally operating customers is supplemented by service locations in Great Britain, Mexico, Singapore and China. This enables EX-CELL-O to meet requirements in production flexibility.

In addition, EX-CELL-O has the marked distinction of being part of the IWKA Corporation of Karlsruhe. The Machine Tool Group was formed by combining EX-CELL-O’s companies with the BOEHRINGER Group from Göppingen, Froehlich Group from Linefeldon, LSW, FMS Drehtechnik Shaffhausen, and B&K, which was already part of IWKA. The affiliation gives EX-CELL-O its multiplicity while enabling it to tap the resources necessary to produce turnkey installations under the banner of the IWKA Producktiontechnik Group.

“From a management standpoint,” says Manager of Sales Thomas Staudenmaier, “it is much more efficient, giving the customer a single contact person, which streamlines the entire process.”

Engineered solutions
Having been first in a number of ways, EX-CELL-O has initiated many clever programs to help its customers optimize productivity; among these is the flex system using high-speed machining centers. “We were one of the first companies to introduce the linear motor application in machining centers,” Staudenmaier says. Called the XHC241, and created in 1993, this resulted in reduced piece costs, and increases both in quality and in the machine’s operation time.

EX-CELL-O, he adds, introduced Minimum Quantity Lubrication (MQL) systems in 1996 for high-speed machining applications, a big benefit for customers because of the inherent cost reduction. In addition, EX-CELL-O offers a family of modular Machining Centers and a Modular Precision Boring Machine System (called the PB Plus™) to address manufacturers’ requirements for flexibility, re-configurability and precision for a variety of production metal cutting applications.

Proof is in the programs
Internationally known for its machine tool experience, EX-CELL-O has helped customers with many high-volume production programs. These include major investment projects manufacturing cylinder blocks, cylinder heads, transmissions, crankshafts, connecting rods and constant velocity joints. Delivered lines include Fully Flexible Systems, Agile Systems and Transfer Lines where EX-CELL-O has acted as part of a supplier team managed by the customer, or as a Turnkey Supplier taking responsibility for complete installations.

Strategic engineering
Among the most notable of programs available to customers is EX-CELL-O’s “simultaneous engineering” partnerships that start with a clear set of client-developed target specifications for each task in a specific project. The client/EX-CELL-O project team works together in areas such as concept development to specify economic and technical objectives for the product as well as product design, prototype and testing, production optimization, trial run and, finally, acceptance, where the final release of the manufacturing system takes place.

EX-CELL-O’s success is based on a good understanding of what products its customers need and a determination to put those products onto the market. Its strong engineering base shows in the quality of its products and its active development program, which has proven its worth time and again. From the development of the connecting rod fracture splitting process through to the successful use of linear drive motor technology, the company continually questions the bottlenecks of productivity. In recent years its patented Line Boring Process has greatly reduced the time taken to machine crankshaft bores in cylinder blocks, with the added benefit of improved quality. This very successful process has been adapted to machine cylinder bores, achieving honing quality geometry, and has been configured into a high speed machining center spindle, allowing tool wear to be automatically compensated during production.

In other product lines a new twin spindle special purpose machine, the XG692, is being brought onto the market for machining constant velocity joints, and a servo-controlled cold forming machine is being developed. “New Concepts, New Technologies” is the company motto on which EX-CELL-O is focused.

Excelling at machine tools
EX-CELL-O Tool & Manufacturing Company’s history began in July of 1919, manufacturing jigs, dies, fixtures and drill jig bushings to close tolerances. Because EX-CELL-O was committed to closing up manufacturing tolerances, working toward tenths of thousands, and held these standards through strict quality control, EX-CELL-O precision sold itself. Eventually, the company used products of its own design to manufacture production parts for customers. In 1920, the company developed precision tools to generate better quality in its tooling and production parts. In the ensuing decades, EX-CELL-O became a leading supplier of woodworking machinery and precision product parts.

In the 1950s, EX-CELL-O became a leading machine-tool builder, having perfected many machining processes and pioneering new machining techniques. EX-CELL-O Corporation acquired the Göppingen machine tool plant in 1958, and built new facilities in Southern Germany at Eislingen/Fils. The new enterprise quickly built an international reputation in the automotive industry based on the quality and productivity of its standard machine tools, transfer lines, and special-purpose machines.

Since that time, the corporation has enjoyed tremendous growth and prosperity. EX-CELL-O GmbH became independent under German ownership in 1987. A sales and service company was founded in Michigan to service the American market. Two years later, EX-CELL-O formed a holding company, and listed its shares on the German stock market.

EX-CELL-O built a special machine tool assembly plant in Sterling Heights in 1992. JW FROEHLICH Maschinenfabrik GmbH, was added to the EX-CELL-O Group in 1993. The company manufactures assembly and test systems at plants in Leinfeld-Echterdingen and Plochingen in the Stuttgart region of Southern Germany, and Laindon, Essex, in England.

EX-CELL-O has been able to reach into China with joint venture FAW, begun in the 1990s. “The company currently is seeking out other business in China for further growth there,” Staudenmaier says.Last year, EX-CELL-O undertook a big investment to update its in-house manufacturing facilities, including a large milling center. This investment is keeping pace with demand for its products, particularly in the United States. “At the moment we have a high automotive backlog from the states,” he says. “The U.S. market has improved significantly for us. A lot of our business right now is in the states.”

As it continues to offer its one-of-a-kind brand of service and machining aptitude, EX-CELL-O’s global organization will remain dedicated to meeting customer needs with the most efficient manufacturing systems, and the most responsive engineering and support services available anywhere. No matter what the requirement, EX-CELL-O has a system solution that offers optimum productivity.