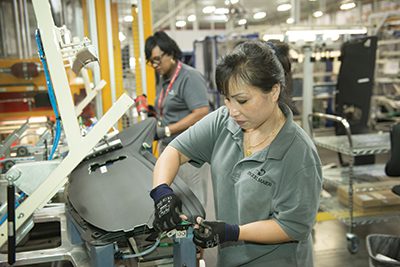 The automotive industry as a whole has rebounded from the 2009 recession, but for many companies recent growth is the result of rebounding back to where they once were. To some extent this, along with changes in the competitive landscape, accounts for the planned expansion by Draexlmaier Automotive of America to add a third more in plant capacity—however, when you’re the leading maker of components that help define the feeling of a luxury ride, you have the luxury of supplying a stable segment that depends on those capable of providing the best for those looking to be best-in-class.

Which is why Draexlmaier is embarking upon a total $35 million capital investment ($25 million in construction costs for a $184,000 square-foot production and logistics facility that includes a new cafeteria and $10 million for new equipment) to expand its existing 150,000 square feet of manufacturing operations in Duncan, Spartanburg County, South Carolina. This marks the third plant expansion since the company started operations in Duncan in 1998; the last was the addition of a production wing in 2011. Construction is underway with expectations of being fully operational by September 2016.

“We needed to expand capacity both to accommodate our current orders and in anticipation of future opportunities,” notes Stefan Bude, president. ”Recently we signed contracts to supply the Mercedes-Benz M-Class and Tesla electric vehicles in addition to our longstanding relationships with BMW and Volkswagen. We literally had no room to modify our existing manufacturing layout to accommodate growth. The expansion not only adds new production lines, it enables us to reconfigure our existing lines to further maximize efficiency. We can also take a number of off-site processes and consolidate everything into a single location. In addition, we’ve allotted 30 percent of planned capacity in anticipation of future growth.”

David Britt, chairman of the Spartanburg County Economic Recruitment and Development Committee and a member of the Economic Futures Group board, says in a GSA Business report that, “Draexlmaier has been a model corporate citizen over their two-decade history in Spartanburg County and they are a great example how successful a premier company can be when they dedicate themselves to the community in which they work, live and play. As their North American headquarters, Spartanburg is a better place because of Draexlmaier’s commitment and we appreciate their continued confidence with this latest expansion.”

Luxury Environment
Draexlmaier specializes in vehicle interiors (including instrument panels, center consoles and door panels), wiring harnesses and plastic components made for premium automotives. Draexlmaier’s history in the Americas dates back to 1976, when it established a small operation on the Canada side of Niagara Falls to supply Volkswagen. When BMW opened its Spartanburg manufacturing plant in 1995, Draexlmaier moved to South Carolina to design and build the harnesses and interior components for the X3 and X5 sport utility vehicles.

Bude notes that the luxury segment Draexlmaier caters to tends to be more stable than the general automotive market. “It’s not to say that we’re immune from it, but from a global perspective you’re always going to have demand for luxury vehicles somewhere, particularly in developing economies such as China and Russia. An additional advantage for us is that while we supply OEMs based in North America and Mexico, these customers are global in scope. For example, one of our longstanding customers is the BMW plant here in South Carolina, which makes cars for worldwide distribution, not just domestic markets.” The BMW connection is integral to Draexlmaier’s reputation as a premier Tier 1 automotive supplier. “The BMW is part of our DNA for quality and engineering excellence,” Bude notes. “It’s a relationship that extends well beyond our partnership here in America, but dates back to the 1960s with our parent company in Germany, the Dräxlmaier Group.”

That reputation is likely to be further burnished now that Draexlmaier is supplying Tesla, a newcomer in the automotive industry, yet one that may set technical standards in much the same way as BMW historically has. While the electric vehicle maker is a relatively new customer, Draexlmaier has already won several Tesla supplier awards.

In addition to the Duncan location, Draexlmaier maintains logistics hubs in California and Tennessee, as well as an engineering office in California. It also has manufacturing facilities in Mexico. But South Carolina is the hub not only for Draexlmaier, but for a number auto manufacturers and suppliers. That concentration brings with it certain labor-market challenges, however.

While the Duncan expansion is expected to add 95 people to some 1100 existing Draexlmaier employees, finding a skilled workforce isn’t always easy. “The labor pool in the automotive sector is highly competitive, yet we can’t always find an exact match between the jobs we need to fill and at the skills required to perform those jobs. We find the best approach is to find people that fit with our culture, and then train them for the work to be done,” Bude says.

He adds, “The luxury segment has high expectations both for quality and production timelines. With the plant expansion, we have the facilities and the people in place to meet and exceed those expectations.”

Custom Wiring
“The Dräxlmaier Group pioneered the customization of wiring systems for specific vehicles,” Bude notes. “The practice of using off-the-shelf harnesses is sloppy, inefficient and, ultimately, more costly to the OEM. Customers come to us with their designs and we either work their specs or suggest modifications. The earlier we get involved in the design phase, the better. Our relationship with customers is less that of a supplier than a partner, beginning with R&D and throughout the supply chain, to supply OEMs the unique benefits that come from a customized harness that effectively integrates into the car’s design and manufacturing process.”

Bude adds. “When you do just-in-time, build-to-order manufacturing as we do, you have to integrate your processes with those of your customers. That’s what we strive for, and what our customers have come to depend on us for. It’s not sufficient to supply state-of-the art products. You have to be part of an integrated team effort where you work shoulder-to-shoulder with your customers to provide a solution tailored to their needs, as well as the needs of their customers.

The Future
Today’s cars, particularly in the luxury segment, increasingly rely on sophisticated technologies to control everything from opening a sun roof to asking the GPS system for directions. The Millennial generation in particular is likely to be more interested in how well a vehicle integrates with their phones and music library than its horsepower or transmission system. This hasn’t affected Draexlmaier’s engineering goals. Yet.

“At present, our product mix is pretty much what it has been over the last few years,” Bude says. “However, we are looking at future opportunities that will address the growth of sophisticated technologies and the need to design and engineer car interiors that can make the most effective and safe use of them. That’s another reason why we expanded our physical plant—to be fully prepared to satisfy future demands for new and innovative products for the international automotive industry. That’s been our history. And it is our future.”