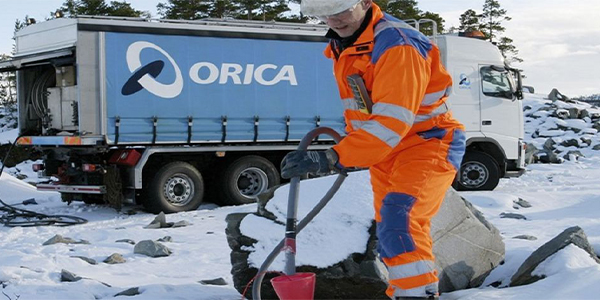 Timing is everything to maximize productivity and safety of explosive technologies used in quarrying, and underground and surface mining. The key to success is precision timing of detonation. For the intensely competitive aggregate quarrying industry, blasting must be done with careful control of rock breakage to safeguard pit wall stability and improve output.

Similarly, in the extreme conditions of surface coal mining and underground metals mining, precision blasting supports safety efforts, environmental protection, and cost control. The same care is also needed in the use of explosives in the construction industry and seismic (oil) exploration.

“This industry is about controlled blasting, timing and placement of explosive charges so you don’t throw rocks out of the blast area of quarries,” explains Vice President Brian Wallace. “In most applications, blasting is one of the first stages in a production process, but has the biggest leverage on downstream mining costs. If you do the blasting right, you achieve the best fragmentation, and your costs thereafter are reduced.”

Orica is on the cutting edge of efforts to bring the latest technology to these mature industries. A big trend in the field is the use of electronic detonators. “Electronic detonators represent a significant technological change leading to the benefits of better productivity and ultimately lower costs for customers,” Wallace says.

The sophisticated system gives Orica customers optimum blast results for overall cost containment and productivity. Extensive global applications of the i-kon system have demonstrated unsurpassed performance. After hundreds of thousands of detonations and more than 10,000 blasts, the i-kon(tm) system has met and exceeded the expectations of customers in surface metal mining, quarrying and construction, open cast coal, and other operations around the globe.

“In the blasting world, timing is done on a millisecond basis. Controlled detonation and timing precision give significant benefits in terms of vibration and noise control, fragmentation optimization, and overall cost control,” Wallace says. The i-kon’ system can fire up to 3,200 detonators per blast with many advantages over standard (pyrotechnic) delay detonators. The i-kon’ system is programmable with up to a 15,000-millisecond delay range, in one-millisecond increments. That’s precision.

Programmability also sets i-kon’ apart, allowing flexibility for variable and complex operations. Blasts can be programmed right in the hole immediately before firing. Re-programming can be done easily using a PC with the dedicated blast design program, quickly and conveniently downloadable to on-site equipment.

Cutting Rocks and Costs
As advanced as the i-kon(tm) electronic detonation system is, it came about only after 100 years of industry experience. Orica was established in 1998 when it acquired a regional portfolio of several businesses in Australia, along with a global explosives business that included the historic Atlas Powder Company, which dates back to the early 20th century. Orica is a fairly new name but has behind it a heritage of expertise in explosives and blasting technology, supported with today’s network of manufacturing, distribution, and maintenance facilities in the U.S., Canada and throughout the world.

Operations include ammonium nitrate plants in the U.S., requiring strict compliance with regulatory imperatives, which have stiffened since the 1995 Oklahoma City bombing and Sept. 11, 2001.

“Security is a critical issue for us particularly because of the threat of terrorism, so the regulatory environment has become more and more challenging and is going to become tougher and tougher,” Wallace says. “We continue to work with the regulators hand in glove.” However, he sees a silver lining in this difficult area. “In a way, the more regulated this industry, ultimately the safer it is for everyone.”

Since its inception, Orica’s watchword has been safety. The company’s vision is clear: No injuries to anyone, ever.

“Safety, health and environment is our mantra,” Wallace stresses. “Safety is really, really important in this industry and we have safety records that are exemplary.”

Orica’s full range of products meet environmental challenges also, such as controlling explosives to prevent the generation of nitrous oxides, the red fumes that can be released after a mining blast.

One of Orica’s newest initiatives is known as Advanced Mining Solutions (AMS), which delivers systems to reduce customers’ overall operating costs related to the drilling and blasting area and use of explosives. The i-kon(tm) system is used in AMS because the precision of the i-kon(tm) digital energy control system leads to cost containment over the full range of mining or quarrying operations. For instance, proper breakage can cut costs in later phases of quarrying by reducing the crusher or loading costs.

“People tend to focus on unit costs and cost centers in each stage of the operation, but it’s important to draw attention to the total cost of the enterprise,” Wallace says.

Another technology that is being marketed in the U.S., after success in other global markets, is Orica’s Miex water treatment system.

“It’s not related to explosives, but it’s another business entity within Orica and as much a novel technology as i-kon(tm) or AMS,” Wallace says. “It’s a unique, recyclable resin technology for water purification that was developed in Australia.”

The U.S. is a huge market for water treatment with so many municipalities, a large population, and enormous usage of water. While American water treatment systems are distributed among thousands of cities and towns, that diversity presents a business opportunity for Orica. “You can enter the market without having to convince the whole nation to use the technology, so it’s an exciting growth platform for the business,” Wallace observes.

Explosives are still its core business; Orica gained a significant market share when the company was established six years ago. While global business continues to open up in the former Soviet Union and China, the U.S. remains the key market.

“The U.S. is the biggest user of commercial explosives in the world. That surprises people,” Wallace says. “Mining is a huge part of this economy, particularly coal mining. There’s also a lot of metal mining – copper and gold – and the aggregate quarrying industry is the biggest in the world.”

To mine that market, the company is going deeper. “In the U.S., our focus is to grow our profitability,” Wallace says. “We are trying to bed down the business and focus on the needs of our customers.”