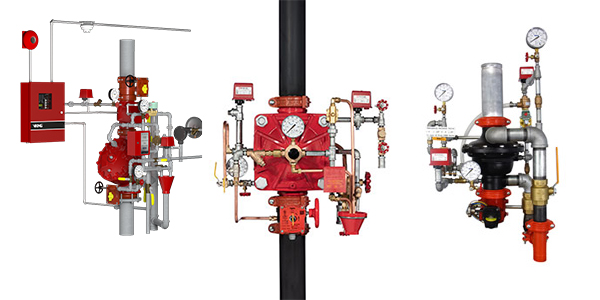 What do Independence Hall in Philadelphia, the Islamic University in Jeddah, Saudi Arabia, and the Great Hall of the People in Beijing’s Tiananmen Square have in common? They all entrust the fire protection of their valuable assets to products manufactured by The Viking Corporation of Hastings, Mich.

When it comes to choosing the best fire-protection products to stand guard over valuable properties and irreplaceable artifacts, Viking fire-sprinkler systems provide a bridge that spans even the most pronounced cultural differences. Engineers worldwide recognize that Viking, which manufactures about 7,000 products, offers the best in quality and product design in sophisticated, water-based fire-protection systems.

Here in the United States, Viking products have become a pivotal part of the protection scheme for our national heritage and for our security. From the White House to B-2 bomber hangars at Whitman Air Force Base in Missouri to Federal Aviation Agency towers across the country, Viking products ensure the safety of our national assets.

What is it about Viking products that generates such a level of confidence among those that specify them?

Decades of Quality
Companies manufacturing life-saving and property-protecting products such as fire-protection sprinklers and valves need to be acutely sensitive to quality, reliability and durability issues. In fact, these issues themselves might be considered Viking’s core competencies. “Many of our customers expect Viking products to perform 20 to 50 years or more, so quality is a big focus for us,” says Bill Maddox, Viking’s president. “We recognize that our products will be in the field for a long time, sometimes with less than ideal maintenance, and we expect them to work when they should.”

Viking has always used energized spring seals to seal the waterways of its sprinklers. “This Belleville spring, combined with our low-zinc alloy frame, means our sprinklers are designed for trouble-free, long-term performance,” says Del Dornbos, vice president of the sprinkler business unit.

Viking’s multifaceted quality-assurance program is a major component of its ISO 9002 certification. The company works closely with its suppliers, choosing only those that provide consistently superior components. “We also have extensive internal testing facilities, including the only fire-test building in the industry designed to test to UL standards,” Maddox notes. This is where Viking monitors the performance of its sprinkler products in accordance with the requirements of the industry’s approving agencies. These include Underwriters Laboratories and FM Global, as well as a number of international testing agencies.

Global Systems
Viking sells through its worldwide distribution outlets to fire-sprinkler contractors, who typically work with general contractors or mechanical contractors on construction projects. “We provide the components they need to design and install a fire-sprinkler system for the building,” says Tom Deegan, vice president of new business development. Viking’s major markets include commercial applications such as office buildings, hotels and shopping malls; industrial applications such as warehouses and factories; and the education sector, which includes schools and student housing. A relatively new market (since the 1980s) is residential, which includes installations in apartments, townhouses and single-family dwellings.

“We also sell to the special-hazards market, which ranges from small computer-room applications to highly sensitive risks like aircraft hangars and power-generation plants,” says Mike Bosma, vice president of the valve business unit. “We expect to see more business opportunities with the increased interest in the energy sector.” In these situations, the systems are activated by a detection unit and can include multiple layers or types of detection to initiate operation.

Many types of special-hazards systems exist, and Viking believes the key is to perform the complexity of functions required in today’s market using the most simple and dependable equipment. That’s why the Viking control valve is at the heart of all special-hazards systems. With one moving part, this quick-opening valve is resistant to false tripping. “Whether you’re protecting an aircraft hanger with a foam-water system or a computer room with a water-based system, it’s essential that the system doesn’t discharge unless there’s a fire,” Bosma explains.

Excess water discharge is also a concern when fighting a fire, so Viking makes its unique Firecycle system. “This cycling system responds to the heat of a fire and then automatically senses if the fire is extinguished or under control. It then cycles off so the overall output of water is limited,” Bosma continues. “Fail-safe detection allows the system to cycle on again as needed to effectively control the fire.”

Firecycle and many other Viking systems are available in a self-contained TotalPac option. This popular product is a pre-assembled and pretested version of Viking’s standard systems, ensuring a quality installation every time. Bosma says, “These pre-assembled systems take the guesswork out of installation.”

Grate Work
When the U.S. military recently approached Viking with a problem, Viking worked with them to provide provided the solution. “They wanted to protect their aircraft hangars without using valuable floor space and didn’t want any protrusions in the hangar,” explains Bosma. The normal method in this application would be to spray a foam-water solution through discharge devices placed at various locations throughout the building. “They wanted something that could be installed in the floor so planes could move around within the hangar without any obstacles,” he says.

Viking solved the problem by developing the Viking Grate Nozzle. “It’s part of an in-floor system designed to distribute the foam-water solution from grates below floor level,” Bosma continues. “It provides a quicker and more efficient attack on the fire.”

“Our involvement in foam is unique to sprinkler manufacturers,” adds Maddox. He also notes that foam systems are used in applications involving the presence of flammable liquids, such as paint, jet fuel, gasoline and alcohol.

Another area of interest is the residential market. As more and more people realize the cost of installing a fire-sprinkler system is often less than installing air conditioning, Viking sees residential applications offering promising growth to the company. “Residential sprinkler systems are getting more attention,” says Maddox. He observes that in some areas of the country, building codes now require these systems in new home construction.

“More and more communities are now recognizing that fire-sprinkler systems, combined with traditional fire brigades, offer the most cost-effective way to provide a level of fire protection to the community,” adds Deegan. He also cites the heightened legislative activity regarding this issue. Legislation is also responsible for an increase in the number of dorms being built or retrofitted with sprinklers. “The fires at the dorms in Seton Hall University in New Jersey drew a lot of attention and resulted in legislation in many states,” Deegan notes.

“Viking has a fire sprinkler uniquely suited to student housing,” Dornbos says. “It is a concealed side-wall sprinkler with a very low profile, so it doesn’t protrude into the room and is less vulnerable to damage.”

A Century of Ingenuity
Tough individuals driven with the desire to improve the human condition are the cornerstones of American manufacturing. Emil Tyden was such an individual. He founded the Tyden Seal Company in 1897 in Hastings. When a fire broke out in his factory, he scrambled to find a company that could fireproof his business. “He found the bids were very expensive and decided he could design and build a better fire-protection system himself,” says Maddox.

That decision proved to be the birth of The Viking Corporation, in both fact and in the spirit of innovative solutions. Thanks to that tradition, “we’ve established the company as a major player in the industry,” Maddox continues. The fourth generation of Tyden’s family continues to operate the family-owned business, which stands today as one of the world’s leading manufacturers of fire-sprinkler systems.

“We expect to continue to maintain our position as the manufacturer of the highest-quality and most innovative products available in the industry,” says Deegan. He adds that Viking products are already sold in 50 countries. With manufacturing facilities in Michigan, Luxembourg and Singapore, Viking is well positioned to lead the industry internationally.