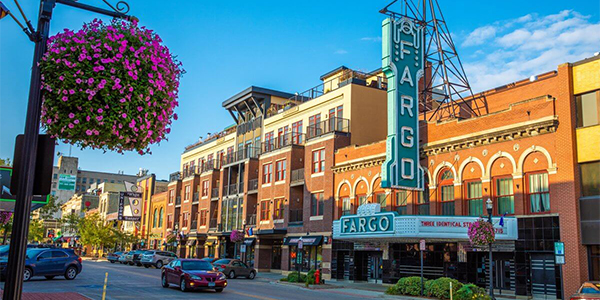 Fargo’s climate may plunge into the single digits in winter but according to economic research, the city is considered number two in a ranking of small metro entrepreneurial “hot spots.”

Such hot spots, in the view of David Birch, president of Cognetics, the economic research firm that did a study on the city, generate successful business activity in every economic sector. To further its stance as a growth region, Fargo also was listed second in Inc. Magazine’s “50 Best Small Metro Areas to Start and Grow a Company” in the December 2000 issue, which highlighted the low crime rate and availability of strong labor. In fact, North Dakota boasts the second lowest overall crime rate and the lowest violent crime rate in the nation, and is considered one of the best places in the nation in which to raise a family. With an excellent education system and a population that is considered among the most work-hearty anywhere, Fargo leads the way.

These attributes, however, run contrary to overriding perceptions about Fargo, a city that hugs North Dakota’s southeast border with Minnesota. For starters, the 1996 movie of the same name, ironically centering on a brutal murder within city limits, also showed the brutal truth of winter in the Great Plains, in which far-reaching open space is knee-deep in far-drifting snow, but did not show the “other Fargo” – a city of movement, of entertainment centers, theater, opera and other cultural institutions as well as its proximity to three major universities. Second, the region was all but swept under the rug by the outset of the 1990s as a place that would be hard-pressed to sustain meaningful economic development with weather, again, playing a major role in this perception.

But critics never gave Fargo credit for having the fortitude to engineer a campaign that would promote the strength of its workforce over the strength of its icy gales. In doing so, the city has been able to, indeed, not only shake off these perceptions but also emerge in the opinion of some observers as a leading economic center.

Notes Brian Walters, president of the Fargo-Cass County Economic Development Corp., “The perception about what it’s like to conduct business and live here was often not properly characterized” by those unfamiliar with the area. But in the early 1990s, city leaders got together and formed an aggressive approach to job creation and economic development. This strategy has created an economy that has remained strong while other business centers have seen mass layoffs; in fact, in 2003 Fargo has seen its best year in terms of new job creation, Walters asserts.

In addition to a high quality of living that centers on low property taxes, low healthcare costs and reasonable real estate prices, Fargo also boasts an educated, skilled workforce that can be tapped from several areas: North Dakota State University is situated within the city of Fargo; Concordia College is nearby and Minnesota State University, Moorhead, which operates a technical school, is a short trip over the border.

In the past several years, the city has seen growth in its manufacturing and technology centers, including the campus of software giant Microsoft. Companies setting up business this year have included Pepsi Connect, a sales support center for PepsiAmericas, affiliated with Pepsi Cola. Alien Technologies, a firm focusing on RFID technology, opened in the city’s research and technology park and SYSCO has opened a distribution center. All in all, more than 600 jobs were created in Fargo in 2003. Two business parks – Sheyenne Industrial Park and Fargo Technology Park – are still promoting available space for manufacturers.

“The overall positive business climate, and the associated low costs of living and doing business make this a favorable location,” Walters stresses. “I frequently hear from companies that have a presence here that we have the most productive work force.” (Fargo’s labor force has been shown to be 20 percent more productive than the national average.)

Commissioner Lee Peterson of the North Dakota Department of Commerce adds that Fargo has been a “tremendous growth area for the state,” growing by about 25 percent in the last 10 years. “We really don’t have a reputation out in the world at all; in fact we’re virtually unknown. In recent years, we’ve tried to market our state and the advantages here.”

The Great Plains boom
So it seems the Great Plains has come of age in the technology driven 2000s by marketing itself as an untapped area, unbothered by crime, pollution and traffic woes that plague other areas, yet abounding in modern day technology and resources. Fargo offers easy access to transportation networks as well, being located at the intersection of I-29 and I-94. Air travelers are served by Northwest and United, with frequent direct flights to Denver, Chicago and Minneapolis, in addition to global connections. Amtrak provides rail service east and west from the downtown depot. Within Fargo, commuting couldn’t be easier, with the average commute time under 15 minutes. According to census figures, 172,757 people call the area home, undaunted by the cold.

“We have a harsh climate but the overall quality of life is excellent,” asserts Joel Dick, vice president and COO of Roman Meal Milling, producers of multi-grain mixes and toppings for foods such as doughnuts and dry batter mixes for the potato industry. “People who live here just learn to roll with the punches.” And despite a feisty winter season, the community, he adds, “is growing in leaps and bounds.”

Rick Kasper, president and COO of Global Electric Motor Cars, a wholly owned subsidiary of DaimlerChrysler and manufacturer of low speed, two- and four-passenger electric vehicles (referred to as neighborhood electric vehicles), is a native of Fargo. From his perspective, the advantages of operating a business in Fargo include an ingrained “Midwestern farm work ethic,” which has bred a hard-working labor force. “We also get tremendous support from Mayor Bruce Furness and at the state level. The quality of life here is unequalled; it’s a great place to raise a family.”

Roger Levos, vice president of quality and supply management at Phoenix International, a wholly owned subsidiary of John Deere that produces electronic assemblies for harsh environment applications, says his company has taken advantage of the area’s academic foundation. Having two facilities in Fargo, the company sited one in the technology park on the campus of North Dakota University. Here, the company developed a new product introduction center, where products are developed and tested.

“I’ve been in manufacturing in excess of 30 years,” he says, “and I’ve done a fair amount of traveling to different manufacturing sites. What stands out for me is the people. In all my years here I think this is the strongest aspect of having a business in Fargo. This is a good environment in which to get things done. People here have an exceptionally good work ethic, and absenteeism is never a problem. The focus all the time is on the betterment of the customer.”

For all these reasons it seems Fargo is one of the best untapped economic resources, and an area that has taken its place in the country as one of the leading centers for business development.