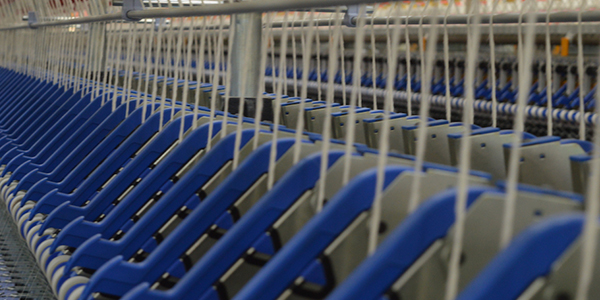 UCO is a European company with roots extending to the textile barons of the 18th century – a venerable bulwark of now legendary entrepreneurs such as Lieven Bauwens and Abraham Voortman, who laid the foundations of the Belgian cotton industry in the city of Ghent.

The companies they founded – 200 years later – merged in 1968 under the heading UCO, for “Union Cotonieres,” which means, literally, union of cotton producers. It is a conglomeration of spinners, weavers and cotton fabric producers. Another – a relative infant compared to the centuries-old range of textiles that has clothed kings – was denim.

In the long history of fabric, however, denim got off to an unglamorous start. For Europeans, denim always had been perceived as work wear. This changed, however, in the 1970s and 1980s, especially after Levi produced its famous 501 brand and jeans began to be eyed by designers as the next fashion frontier. Europeans quickly caught up to their American counterparts and began producing fashionable denim products.

This led to the opening of UCO Sportswear in Europe. The name is a misnomer of sorts; sportswear is not what the company produces. “It’s one of the largest manufacturers of denim in Europe,” says Bart Van de Woestyne, UCO Fabrics Inc. president and chief operating officer. UCO Fabrics, based in Rockingham, N.C., is a daughter company of this European giant. Other arms of the UCO family include UCO Yarns in Europe as well as UCO LDC, producer of filament fabrics for sportswear, also in Europe.

At present, it’s safe to say that denim has found its place. In fact, last year, says Van de Woestyne, was one of the best years for UCO because of the recent resurgence in all things denim. During the past two decades, he explains, not a lot had been done to change the look of denim in terms of fit and fabric. Now, jeans have seen a rebirth in the form of new fabrics, fits and finishes – fashions that offer infinite varieties aside from the basic five-pocket invented by Levi. In demand are fabrics that offer more extensive cross-hatching, ever darker indigos and jeans with whiskers, which basically pre-wrinkles the crotch area. Such fabric variety is being produced in line with new technological advances that make companies such as UCO not as much slaves to fashion as bellwethers of the latest trends.

Rich denim, Poor denim
The commoditizing of denim, as any fashion historian would know, began with Levi Strauss, a German immigrant who followed the Gold-Rushers out West, offering them durable fabric out of which, he suggested, tents could be made. These rugged frontiersmen, however, didn’t need fabric for tents. What they needed was fabric that was durable and wouldn’t rip or tear in a harsh environment. Having the best focus group he could possibly hope for in these pioneers, Levi Strauss began to produce denim overalls for the working class.

Says Van de Woestyne, whose company sells directly to fashion retail moguls such as Levis, Gap, American Eagle and Calvin Klein, the product has transformed itself, quite literally, from rags to riches in terms of the sense of fashion it conveys. “Denim has been reinvented. It’s gone from being a commodity into a fashion product,” he says.

His company currently is at work researching and developing a range of different textures to give denim an ever fresh and trendy look. As pioneers in an industry that needs to listen not only to consumers but also to fashion professionals, UCO has set its sights on developing a number of innovative new lines of fabrics. One is called Kevlar, developed exclusively through a venture with DuPont.

Kevlar “is the strongest manmade fiber on Earth” and is probably best known as the material used in bulletproof vests. Traditionally, such fabric had been heavyweight but through its relationship with DuPont, UCO has been able to develop a lightweight version, four times as strong as regular denim. Aside from security uses, such fabric can offer advantages to the consumer – perhaps a young skateboarding male, for example, who needs to know his denim can withstand the pitfalls of the sport.

In other areas, UCO means to do for denim what architects have done for buildings; in this case, adding function to fabric, he says. “We need to make it more comfortable.”

Strategic Expansion
The company that produces 20 million yards of denim each year, has put forth a four-year plan by which it means to grow steadily. By adding more looms and investing in preparation and finishing equipment, UCO’s goal is to play a bigger part in the denim fabrication business, even in the face of a market that, while expanding in terms of the myriad ways in which denim can be transformed for the fashion world, has suffered with plants going overseas.

Growth also comes through reinvestment. Through consistently investing in its own facility the company is poised to supply a fashion-driven demand. This runs contrary to the operations of many of its chief competitors.

“Most mills are manufacturing and commodity driven,” he explains. “ Our approach is different. We have a different culture here and we offer speed to market that others don’t.”

It would make the textile barons proud.