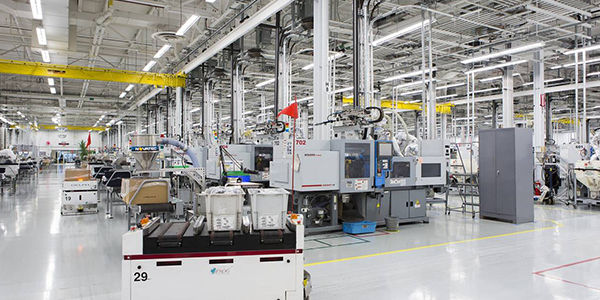 If you listen to officials at Packard-Hughes Interconnect (PHI), the division of Delphi Automotive Systems, describe its recent ventures, it’s like the harmonic convergence and the Big Bang, rolled into one. But that’s what things feel like at PHI nowadays. New technologies and a drive to become a leader in connector markets have not only changed the face of the company, but have sparked a new wave of synergies and excitement.

Says Bill Jensen, president of PHI Connection Systems, “There’s a lot of energy and resources coming to bear on potential new markets that are moving at light speed. It is both energizing and thought-provoking; challenges and issues roll in like a tsunami. Then, when you add in potential acquisitions and partnerships, the growth potential and opportunities are tremendous.”

And all the company had to do was take seriously industry claims that Delphi Packard and its subsidiary, PHI, together ranked No. 4 worldwide in the manufacture of connectors. What was to prevent it from becoming No. 3? Nothing, they decided. But that’s another story.

Glorious Beginnings
Two inventions that would turn around transportation in the 20th century, the car and the airplane, play vital roles in PHI’s story. It begins roughly 100 years ago with the launch of the Packard automobile by the Packard Electric Company. Then it continues through the 1920s, when flying ace and future billionaire Howard Hughes founded Hughes Aircraft. Packard had been involved in the manufacture of automobile connectors; Hughes traditionally had serviced military markets and had established its Hughes Connecting Devices division in the 1960s, a segment that was sold to General Motors in 1985, says Media Relations Manager Ann Cornell.

GM, however, sought to sell off pieces of the Hughes divisions it had purchased, including the connecting devices division. Seeing opportunities and synergies with connecting devices, Packard Electric decided it wanted that piece of the business and acquired it in 1993. The company became known as Packard-Hughes Interconnect, located in Irvine, Calif. In 1995, Packard Electric became Delphi Packard Electric, a division of Delphi Automotive Systems. And in 1999, Delphi spun off from GM. Because it was no longer a part of GM, industry analysts no longer saw the company as a captive house. It soon grew to become the fourth largest connector supplier worldwide.

“We had been selling connectors outside of GM for years, but always as a part of the GM organization,” explains Cornell. “Since we had spun off from GM, the industry said, ‘You mean all those connectors aren’t exclusive to GM?’ As that happened, Delphi and the PHI organization looked at the historic military and new commercial opportunities for its connector business and together recognized the synergies in our connector operation. The company realized it had to align its resources, and started putting new strategies in place to look at the whole connector world. We realized as we began to broaden our focus, we could become the No. 3 supplier.”

This newly combined entity of Delphi Packard Electric and PHI wants to continue to grow in the automotive market “because the leadership position we’ve attained is very important to us, and it will continue to be one of our key focus markets,” explains PHI Marketing Director Gail Miller. “But we also began taking a look at non-automotive markets, such as computers and perpherals, industrial and datacom and telecom, while keeping true to our military heritage.

The Next Level
Delphi’s plan is to expand into new markets by combining a time-tested standard of global manufacturing and operations excellence – from years of providing superior value – with Delphi advanced technologies. Among these is Delphi’s highly sophisticated Gold Dot™ technology, consisting of an actual dot or bump which is the key element and a unique feature of Delphi’s Gold Dot™ flex circuits. Its features include high-contact pressure over the small round top of the standard Gold Dots™, which help to drive away or punch through dust, debris and even some metallurgical imperfections to make highly reliable electrical contact. Even when mated against PCBs using thin immersion gold coatings, the contact resistance is low and stable. This technology also has a “high-aspect-ratio” shape with almost vertical sidewalls that naturally resist buckling under load. While the high-contact stress assures good performance at low contact forces, the bump strength ensures that performance is maintained as well at high loads. The Gold Dot™ can fill emerging requirements for speed and density with high reliability.

Delphi’s Gold Dot™ technology was featured at DesignCon 2000, held in California in February of last year. The company was touting it then as a vital new technology for the commercial telecommunications and data-communications markets. (It is now used in Ericsson cell phones.) “The impedance-controlled, flex-based configurations and extraordinarily small-contact geometries provide continuous and clean transmission of signals upwards of 2.5 gigahertz throughout the connection systems,” according to PHI’s Terry Wang, Gold Dot™ engineering manager. “This allows higher bandwidth, and bandwidth is the name of the game.”

In the area of fiber optics, Delphi has engineered a fiber-optic connector terminus featuring a free-floating, self-aligning design that minimizes signal loss due to fiber misalignment. In Delphi’s multichannel connector systems, the termini float within the connector and self-align. The termini use the constant pressure from Belleville springs, rather than lower-force coil springs, to prevent termini separation resulting from shock, vibration or thermal cycling.

“We have been offering fiber-optic connectors since 1973, so our knowledge of and commitment to our customers’ needs is well developed,” Miller states. PHI’s history in fiber-optic pier-side conductivity for the Navy, as well as its development of hermaphroditic connectors for the broadcast industry, shows just two areas of fiber-optic connector advances. Its new focus on advanced optics and telecommunications-specific applications will strengthen the company’s position in this market.

Targeting the automotive and industrial marketplace are the shielded six-way connectors for electrical interconnections in compressor motors, heated windshields, power steering and fuel-fired heaters. The six-way connector is used where maximum EMI-RFI protection is required. In addition, PHI’s two-way plug and receptacle connectors for aerospace technology have resulted in a cost-effective electrical connection system suitable for a variety of applications; they are featured as standard equipment on the new GM electric vehicle. These connectors provide superior power-carrying characteristics coupled with environmental sealing and superb safety, and convenience while mating and demating the power supply.

“Our electric connectors are well respected and offer high performance,” says Miller. “We worked hard for and appreciate our reputation as a quality connector supplier in our established markets. As we refocus, there’s tremendous growth in connectors for telecom and datacom applications.” Such growth potential spurred the development of Delphi’s 2-millimeter hard metric connectors, which Miller describes as “the foundation of our growth to support the interconnect needs” in telecommunications and data-communications applications.

After Light Speed
Delphi and PHI consider customer needs as the engines that drive research and development, and which will help to propel the company into a wide array of new markets. “We’re looking to grow both organically and non-organically,” says Miller, through additional strategic partnerships, joint ventures, acquisitions and mergers.

“We are really establishing one company from two companies in PHI and Delphi,” adds Miller. “We’re the largest supplier of automotive connectors. Combined with the technical expertise of PHI, the future is ours for the taking. Our philosophy is a simple one – meet our customers’ interconnect needs today, tomorrow and far into the future.”