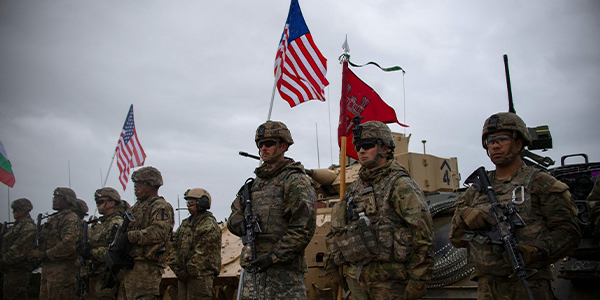 A chef stationed in Iraq will be up at 3:30 in the morning to prepare breakfast for his troops, a job performed by many chefs before him and held as a vital part of military life in time of war.

Indeed, according to an article dating from World War II in The Quartermaster Review: “Trained, qualified personnel . capable officers and non-commissioned-officer technicians. men with years of food experience. have done much to make food service a vital force. Maintaining high standards of food service in Army messes is their never-ending job.”

To support their mission in Iraq, those who process and ship the 1.3 million pounds of food daily – and those who rise in the wee hours to prepare it – feel no less of a responsibility than their peers have throughout history.

“We have learned in Iraq that a high quality hot meal in that environment is a huge morale booster for our soldiers. Just think of having 200,000 of your closest friends over for dinner tonight, and you can quickly imagine how big of a mission food service is in that part of the world, ” James Madison University 1984 alumnus and Army Center of Excellence, Subsistence Director Lt. Col. Donald Vtipil told a reporter for the university’s “Operation Purple Pride.”

During a recent interview, Vtipil added, “Dining together is a vital part of increasing morale. You come in for 30 to 40 minutes and shake off the war and enjoy a meal; you sit down and talk about family instead of being 24/7 with the war.”

A far cry from beans

Shaking off the war means finding some level of comfort and there is perhaps no better way than through a good meal, whether it consists of the peas, beans, beef, pork, salt fish and bread and flour approved by the Continental Congress on Nov. 4, 1775 or a more substantial menu.

In 300 years, peas and beans, beef and pork, remain staples but today’s army is treated to a menu perhaps more diverse than any other during wartime. Complete with hamburgers, hotdogs, soda and all the American favorites, it is a meal plan tediously planned to ensure each soldier receives the necessary nutrients to sustain a 3,600-calorie-a-day diet.

“I have been there three times and spent 60 days there in 2003,” Vtipil said, explaining that the ACES mission is two fold. To begin with, it is responsible for training all food service specialists in the Army and Marine Corps on everything from sanitation and nutrition to the basics of frying an egg. ACES also brings back senior non-commissioned officers for training – these managers will then be disbursed among the 330 dining facilities ACES operates around the world.

“We also manage the worldwide food service program as well as going into combat environment to make sure soldiers getting same high level of service,” Vtipil said.

ACES, along with Army G-4 Subsistence, reports that current operations in the Iraqi Theater involve different food service programs, depending on whether a troop is stationary or mobile. Stationary troops, or base camp troops, eat in contract dining facilities and use a specially designed 21-Day Contingency Operation (CONOPS) menu. This menu is referred to as line item, A-Ration products (freshly prepared food).

The Army divides mobile troops into two types – those at Forward Operating Bases (FOBs) and those on patrol. Some of the FOBs are satellite operations from the contract dining facility where troops eat the rations according to the 21-day CONOPs menu. Those at mobile kitchen sites order operational rations, the Meal Ready to Eat (MRE), Heat and Serve Unitized Group Rations (These are specially designed field rations that are shelf stable and are developed at the U.S. Army Natick Soldier Center). “They also order supplemental items such as fruits and vegetables, milk and bread, to support the menu and provide additional variety. If not on the FOB but out on mission they use the MRE to support the meals away from the base camp operations,” relates Public Affairs Officer Lt. Col. Carl Ey.

“We have a number of soldiers eating from containerized kitchens,” or mobilized kitchen trailers, Vtipil related. “I am proud to say that the commanders and soldiers are impressed with the high quality of food they receive there.”

Menus for stationary troop feeding developed by ACES, stationed in Fort Lee, Va., meet all nutritional guidelines established by the Surgeon General of the Army. These menus incorporate all meal choices and include ethnic meals, main line entr‚es, short order and salad bar choices. The menus are prepared using the contract dining facility operations and change as needed to meet the demands of the diner, usually annually, unless expedited. The menu is ordered based on the Order Frequency Schedule for each supported dining facility operation. “Every troop has the same options available across the entire area of operation,” said Ey.

“Our dining facilities give soldiers a wide selection of menu choices and provide the same level of service every day,” Vtipil said. “It helps the soldiers to see brand name products from home that mom and dad will be eating that night.”

A sample of the menu features items you would find out your local diner:

The most popular food? “Chicken wings,” Ey said, adding, “Troops like the diversity of the menus and the dining options available from main line to short order, coupled with a vast salad bar selection.”

“We must meet the requirements for a complete and nutritious menu as outlined by regulatory policy and those established by the Surgeon General,” Ey explained. For example, for an individual operational ration, the MRE, the requirement is 1,200 Calories per meal or 3,600 calories for a day’s worth if three MREs are consumed. The requirement is based upon the optimum level of exertion of the average soldier during a high intensity operation.

Ey explained that there is a healthy amount of leeway for the estimated 2,000 to 2,500 Army chefs to be creative with their dishes. As an example: A shipment of braised beef cubes can produce a variety of meals, such as BBQ cubes, beef stew or stroganoff. “Cooks are thrifty in preparing products that meet the dining tastes of the soldiers, and they often take raw ingredients and make culinary decisions to enhance the diner’s selections and options,” he said.

For Thanksgiving and Christmas all troops receive the same choices of turkey, ham and prime rib with trimmings no matter where they are stationed. “Holiday meals have been an army tradition for many years,” Vtipil said, adding that in order to deliver the food in time for the holiday, planning has to be in place way ahead of time. “This year’s Thanksgiving meal was delivered two months before hand.”

The vast majority of the food items shipped to Iraq are produced in the states by the same manufacturers you find in your local super market. Because of the large quantities supplied, at least some items being processed and prepared each day find their final destination with military customers in Iraq, “although naturally, loads traveling overseas are consolidated as much as possible in order to maximize efficiency by minimizing shipping costs,” Ey said.

“Since the Middle East customers are in contingency zones, we are allowed to give our vendors permission to supply the products of overseas approved source vendors, but this is only done on an exception basis, when the customer desires the foreign source item and no U.S. source is available to meet the requirement,” he added.

Sometimes, he explained, the manufacturer will package the food for overseas transportation. Other times a consolidator will prepare loads of various manufacturers’ items. If an emergency situation exists, then commercial lift is the primary means of moving food. Otherwise, the military contracts with commercial shippers to transport food overseas.

To ward against terrorism, the military requires that its food processors adhere to the strictest standards, which include inspecting and maintaining the integrity of seals on both inbound and outbound products, and requiring proper I.D. and clearances from all personnel admitted to manufacturing areas.

The Prime Vendor for Iraq, Public Warehousing Corporation (PWC) has many employees who support this mission. Its administrative staff numbers approximately 135, including employees located in the States and Iraq; its home office in Kuwait, and even in Jordan and Turkey, its newest platforms of support for this area. Through a squad leader program, PWC has close to another 200 people on the ground with perhaps twice as many drivers. This is in exclusion to the dozens of federal employees at DSCP who manage this contract and its related catalogs, and the Surface Deployment Distribution Command (SDDC) and other personnel involved in making transportation arrangements for it.

Suffice to say, many people get involved with the monumental task of getting food into a soldier’s hands and at the end of the day, sitting down to a meal with 200,000 of your closest friends is perhaps the best comfort of all.

Contributing to this article were Army Center of Excellence, Subsistence (ACES) Director Lt. Col. Donald Vtipil and Public Affairs Officer Lt. Col. Carl Ey. The mission at ACES crosses several levels but its goal is to train soldiers, civilians, and members of other services/countries in Army subsistence and food service for wartime, garrison, and field training, hands-on training, “training as we fight” and training to standard. Visit: www.quartermaster.army.mil.