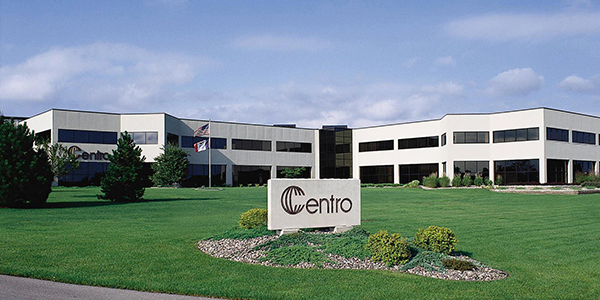 Remember the famous scene in the movie “The Graduate” in which the Dustin Hoffman character is advised that there’s one word he needs to know for the future: “Plastics?”

And do you remember the famous line from the baseball-in-a-cornfield classic, “Field of Dreams,” that “If you build it, they will come?”

Mix those two films, and you’d get Centro Inc., where the dreams of an ex-major league baseball player gave rise to an industry leader in custom rotationally molded plastic parts, emerging from the cornfields of Iowa.

The company today routinely receives accolades such as Supplier of the Year for the John Deere Worldwide Agricultural Equipment Division in 2003. Centro has been doing business with John Deere since 1970 and today is a supplier of rotationally molded products such as fuel tank assemblies, corn head dividers, grass collection systems, and air ducts to 18 different John Deere locations.

Engineering: No. 1
“When you get into the strengths of the company, the thing that differentiates ourselves from the competition is, number one, our engineering capabilities,” said Director of Sales and Marketing Kent Shepherd. He said that the North Liberty, Iowa-based company currently has 26 degreed engineers covering everything from product development to quality assurance – one reason why the company has shown phenomenal growth in the last six years, soaring to $66 million in sales.

Earlier this year, the city council in North Liberty approved a package of incentives to help Centro Inc. expand its plant with new technology. The $2.6 million-plus expansion would lead to the creation of 26 new jobs and the retention of 18 existing jobs at an average wage rate of $12.

None of that success would have happened without the vision and hard work of Dick Rozek, the former major league pitcher who played two years each with the Cleveland Indians and Philadelphia Athletics in the early 1950s and who may be remembered forever for giving up Mickey Mantle’s first home run in Yankee Stadium, on May 16, 1951.

After he retired from baseball, the Cedar Rapids native returned to Iowa and joined the Amana Appliances management-training program. He became regional manager, but as his family grew to seven children he also wanted to cut down on the travel. He bought a manufacturers’ representative business that sold industrial materials-handling products such as conveyors and storage racks.

Rozek came across a lot of food and meat processing plants in the Midwest and saw the possibilities of replacing the stainless-steel containers that most of them used with something more stable and less prone to corrosion. So the ex-ballplayer contacted an early rotomolder, Amos Molded Plastics in Edinburgh, Ind. – now called R&R Technologies LLC – and started representing them.

”He saw an opportunity for all the agricultural tanks in the Midwest that were made out of fiberglass, or steel that rusted like crazy,” said Rozek’s son, Gary, Centro’s current CEO. Dick Rozek started selling basic rotomolded tanks for spraying fertilizer and pesticides on crops, and began some testing programs with Deere & Co., beginning that long relationship.

Rotational molding is a process using a pre-measured amount of powdered plastic resin that is placed in a mold. The molding machine indexes the mold into an oven where the mold and the plastic are brought up to a specific temperature. While the mold is heated it is being rotated continuously on its vertical and horizontal axes allowing the melting resin to lay up evenly on the inside of the mold providing resilient plastic products with uniform wall thickness.

With no manufacturing experience, Rozek decided to launch Centro in 1970 and opened his own plastics factory, in Oxford, Iowa. He secured a small business loan from the government and bought a Rotomatic machine from Bud Boyce’s company in Cuyahoga Falls, Ohio. Centro hired an operations expert from Amos to run the plant, but Rozek still did the selling.

“Dick’s biggest achievement was to prove the durability of plastic tanks and the fact that these could hold up to the rigorous demands of the agricultural and construction equipment industries as well as or better than steel or fiberglass,” Shepherd said. While the company built up a strong sales base in the Midwest, it gradually expanded the number of manufacturing lines and moved into new facilities in Horicon, Wis., and in Springdale, Ark.

Fire and rebirth
“One of the keys to our growth was diversification – he and Gary took rotational molding into different types of industries,” Shepherd said. “We became heavily involved in floor-cleaning equipment and doing HVAC systems for trucking as well as our core agriculture and construction equipment components. Some of our larger growth came with the development of fuel tanks for off road equipment molded from cross linked polyethylene.”

Centro suffered through a major fire at its original factory in 1996 but then launched a significant expansion in it’s North Liberty plant and opened plants in North Dakota, Louisiana and North Carolina, along with a joint venture plant in Indiana. Sales have grown quickly, from $36.5 million in 1995 to $66 million in 2004, before easing back down slightly because of the recession. The privately held firm’s payroll has risen dramatically as well, climbing to roughly 650 employees.

The company is currently the fourth largest rotational molding outfit in North America, but it’s the largest molder that serves strictly custom markets. Shepherd said a lot of that strength stems from the company’s dedicated research and development team in North Liberty, which is constantly looking for new techniques and new products for the material.

Centro (www.centroinc.com) began an aggressive spending program to boost research and development about seven years ago, when it hired Alvin Spence from one of the world’s renowned college rotomolding programs at Queen’s University of Belfast in Northern Ireland. Spence moved from Northern Ireland to eastern Iowa to become Centro’s Director of Advanced Technology and Manufacturing.

The result has been a lot of recognition within the industry. Centro was the winner of the 2002 Industrial Plastics Product Design Award for its rotationally molded roof for the new integrated cab of a John Deere agricultural tractor (5000 Twenty Series). The design used the rotationally molded roof as the housing in which the HVAC components are installed. The new roof design was a fully recyclable part containing eight cored features and 63 molded-in inserts, which are possible only because of the development and use of an advanced process by Centro.

That type of innovation has allowed Centro to survive an industry slowdown and to look forward to a bright future in plastics.