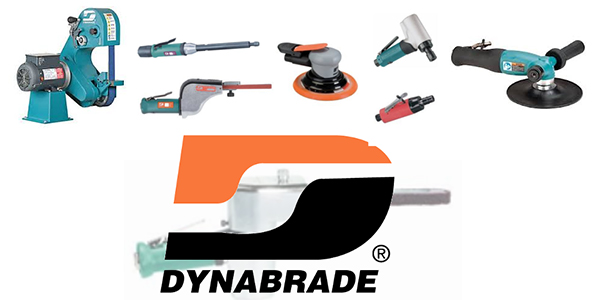 Since the days of the old craftsmen, when things were made and then finished, sanded and polished, the labor involved in doing work by hand has either built up muscles or prompted aching joints to initiate a strike.

Even as late as 1969, those involved in the fabrication of virtually anything – from wood to metals – were still employing manual labor in finishing off these products. Then a person by the name of Walter Welsh asked the fateful question: Why were they still doing things this way? Couldn’t it be done better?

Having 19 years of experience in selling abrasives materials, Welsh, like all great inventors, began thinking that there had to be a better way. His idea was to create a power tool that would run a narrow abrasive belt. He chose pneumatics over electricity and after tinkering he got to the point at which he thought he could make money. His tool was called the Dynafile® and it primarily targeted metal fabrication and fabrication involving composites, in addition to anything involving welding and joining seams.

Such advances have enabled Dynabrade to earn its reputation as a leader in the design and manufacturing of unique portable abrasive power tools for grinding, deburring, filing, sanding and polishing. For work with metals, wood, plastics, glass, rubber, stone, fiberglass and composites, the company has been supplying high quality tools to customers through a worldwide network of professional distributors. Located in Clarence, N.Y., a suburb of Buffalo, the company operates in a 100,000-square-foot plant consisting of 145 employees. Dynabrade also maintains international offices in Wormeldange-Haut, Luxembourg and Sao Paolo, Brazil. Both locations support the high quality manufacture of an assortment of tools that includes: abrasive belt machines, random orbital sanders, finishing tools, depressed center wheel grinders, disc sanders and die grinders – virtually anything necessary to efficiently carry out a specific finishing job.

Good ergonomics
Inherent in every Dynabrade machine is a wealth of ergonomics and operator comfort features. Factors including vacuum, vibration, insulation and noise (VVIN) are addressed at every integral design stage. VVIN is now critical to the company’s research and development of new products.

Vacuum is important because airborne particles can cause severe inflammation of the eyes and lung tissue, varying by the degree of exposure and the type of airborne contaminants involved. It is because of this danger that Dynabrade manufactures self-generated and central vacuum tools that direct airborne particles away from the operator, air motor and work surfaces.

Vibration is also a health concern because all hand-held machines transmit vibration to an operator’s hand while in operation. Operators that work with vibrating machines for extended periods of time risk different types of injury, including vascular injury, nerve injury, skeletal injury and joint injury. To help reduce vibration, the company has built into its tools features such as composite housings, rubber overmolds and insulated handles.

In addition, cold air generated by pneumatic powered tools can cause a variety of work-related injuries. Dynabrade manufactures a variety of tools with thermal-insulated housings to prevent cold air transmission to the operator, reducing the risk of whitefinger disease and other injury-related symptoms. And finally, on the subject of noise the company has added enhancements to muffling systems, exhaust protection and other tool design factors that further reduce tool sound levels in the workplace.

From its basic Dynafile® product, Welsh built a family of small belt tools and expanded into other pneumatic tools for use in abrasives work. “Where you need to finish and polish a surface – we’re targeted on that,” explains Director of Marketing Michael Mancini. “Our expertise is in material removal and finishing.” The company hit a milestone when it entered the market for random orbital sanders by designing and producing the Dynorbital® Supreme to run a round abrasive disc. After that Dynabrade rocketed to the number one position in the random orbital sanding market.

“Everything we do is oriented at the high end of performance and durability,” Mancini notes. “One of the biggest issues has always been the weight of the tool, the difficulty of use and tedium to the operator. We took the random orbital sander and redesigned it to maintain quality and performance, while significantly reducing weight along with minimizing vibration. We made it less of an ergonomic burden.”

That product, the Supreme, was the lightest tool in the marketplace. “It propelled us forward because we had the best product out there, and we followed it with the Dynorbital-Spirit™ model, which reduced weight even further ” Mancini says, adding, “Many people in the business talk like we’re the Xerox of the industry. We are the brand by which people identify the tool; with the finest performance.”

With these advances under its belt, Dynabrade is now embarking on products that can address new and emerging trends in the market, involving the use of new materials outside the traditional woods and metals. “There is a great deal of manufacturing done with composites and resin-based materials, such as nylon and fiberglass,” Mancini says. “We are engaged more strongly in these markets, especially in the marine market with boats made of fiberglass.”

There has also been an expansion in materials being used in the manufacture of countertops for office and home construction. “We have researched the particular needs of someone fabricating with those materials,” Mancini said, noting that people who produce with stone and granite have many tasks to perform, such as cutting, shaping, forming and fitting, and their needs are different from those using solid surface products. “The emergence of new materials gives us an opportunity in new markets,” he adds.

Dynabrade has also placed more of an emphasis on producing tools that will answer its customers’ safety and health concerns. “People are realizing that a good investment in safety will pay itself back many times over,” Mancini says.

Part of this emphasis on safety involves dust collection tools, critical to plant operations where the use of abrasive machines tends to send clouds of dust and debris into the air. To secure those particles the company has recently released a series of portable vacuum systems designed to easily remove workplace dust and debris. Complete with an array of user-friendly features and accessories, the systems can be used easily with the company’s line of vacuum ready tools in industries such as woodworking, metalworking, solid surface, automotive, aerospace and marine. “These systems connect directly to the tool,” Mancini says. ‘This is extraordinarily important when you get into the sanding of fiberglass and carbon – materials that need to be kept out of the air.” “The second product area involves our entry into large format sanders and finishers,” Mancini says.

Recently releasing a line of tools with discs up to 11 inches in diameter, the company has received much acclaim for this line of tools that also features greater wear resistance and less wobbling – these tools are targeted to marine and solid surface fabricators.

Newly released and fast becoming one of its most popular sanders is the Dynabug® II orbital sander for woodwork and solid surface work, offering a great deal of power and finishing capability. The Dynabug II offers a 10,000 RPM air motor moving its sanding pad in a fine 3/32-inch (2 mm) orbit. The result is an ideal tool for sanding and stock removal, featheredging, sealer sanding, blending and finishing, on surfaces such as wood, fiberglass, stainless steel, plastic and composites. Dynabug® II is touted as the tool of choice among furniture manufacturers, automobile manufacturers, cabinetmakers, kitchen and bath shops and marine repair facilities.

In addition, Dynabrade has expanded its line of polishers, including a random orbital polisher that features dual action spinning, which means that while the tool is spinning it also jogs across the surface in little loops – this double motion enables the operator to polish more efficiently with no haze, halo or swirl marks.

The total package
In its drive to manufacture a superior line of tools that address many market needs, Dynabrade markets its products so that its customers can benefit from a total package, precipitated by a more savvy buyer that not only wants a brilliantly performing tool but wants to ensure fewer interruptions to his operations.

“As our end users get smarter, we’re much more sensitive to the issue of overall cost of ownership. How much does it cost to buy, run and repair the tool? And also: How does that tool improve business? So you really need to look at the price of the tool plus the cost of running it, against the benefit of improving the process. Many customers now look at things in that light. Our strategy is to have them understand not only how much it costs but how much it will save.”

With sales at $48 million, Dynabrade has built its operation not only through its lines of superior tools but also by a philosophy to become intimate with customer requirements. “We combine customer intimacy with product leadership. We gather knowledge of their business and processes and needs, their problems and obstacles. Then we put product design and innovation changes in place,” Mancini stresses.

The company employs 30 salespeople in the U.S. coast-to-coast, selling through a series of distribution partners. Another six salespeople operate in Canada; 15 cover Europe, eight are in Asia-Pacific and two are in Brazil/South America. “We hire solution experts to be in the field,” Mancini stresses. “That’s our business formula – to solve needs at the site. That approach greatly distinguishes us from other tool manufacturers.”