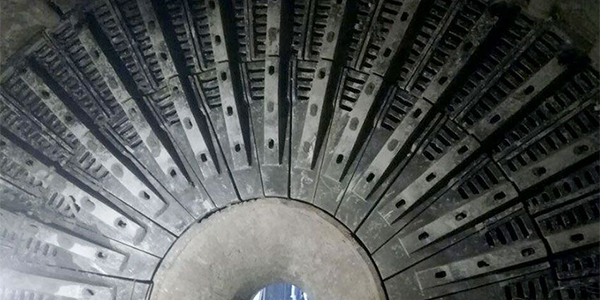 It’s a classic story. An entrepreneurial company perfects a new technological process, is bought by a larger company with the financial backing to develop further innovation, and at the height of success faces an abrupt about-face with an unforeseen dramatic drop in sales. Certech, a specialized manufacturer of injection molded ceramic components, was particularly hard-hit by two major contributors to the downturn in the U.S. economy: 9/11 and the collapse of Enron. By cutting costs through im-proved resource management, lean manufacturing practices, and reduced labor, Certech is now well-positioned with a unique production process that effectively combines quality and quick delivery to recover the “glory days” of only a few years ago.

Certech was founded in 1970 by metallurgist Dr. Stewart Uram who devised a better and faster process to produce hard ceramic cores used by investment casters. These cores are used in the high-speed spinning, high-temperature turbine engine blades used in aircraft engines and industrial gas power generators. These cores are typically in two sizes: six to eight inches long and 18 to 22 inches long.

Certech employs a proprietary low-pressure injection molding process and a proprietary kiln firing process specifically designed to achieve high volumes with short lead-times. Sample volumes can be generated in as quickly as three days, and routinely produce production volumes with a two-week lead-time. For larger parts, Certech can ramp up production to as much as 250 to 400 pieces per week, compared to 150 pieces a week using traditional casting methods. For smaller parts, 2,000 to 2,500 pieces per week is easily reached. An additional advantage of the proprietary Certech process is extremely low wear, allowing hardened steel dies to routinely produce in excess of 100,000 cores.

In 1995, the company was bought by Carpenter Technology Corporation, a leading manufacturer and distributor of specialty stainless steel and titanium alloys, as part of its new line of specially engineered ceramics and metals. According to Sales Manager Evan Reed, the acquisition brought Certech the financial backing it needed to take its business to the next level. “Dr. Uram had done well growing the company as an entrepreneur, but Carpenter offered us expanded resources to improve our technologies and expand our business.”

Certech is headquartered in Woodridge, N.J. with another manufacturing facility in nearby Carlstadt. Additional plants are in Wilkes-Barre, Pa.; Twinsburg, Ohio; Corby, England; and Queretaro, Mexico, totaling approximately 300,000 square feet.

“The Pennsylvania facility manufactures our raw materials that we use in the injection molding process,” Reed explains. “The English plant was first established to service Rolls-Royce and its jet engine division, but has since expanded to cover the entire European and Asian markets. The Mexico plant reflects the growing trend in manufacturing to take advantage of lower labor costs. However, the more complex parts will continue to be produced domestically.

Demand Business
Because it provides a highly specialized product required by investment casters for turbine engine applications, Certech is somewhat unusual in that it does very little marketing. Its two major customers are Precision Castparts Corp. and Alcoa, who in turn sell to the aircraft and industrial end-users. Interestingly, these two companies have their own injection molding manufacturing operations, but often prefer to use Certech for this particular kind of precision casting.

“We compete on the basis of high quality and high-volume capacity, with quick turnaround times,” Reed says, “and we can usually do this for the best price. Our competitive edge is that we just overall do a better job.”

This is not to say that Certech is content to sit on its engineering laurels. “We’re always looking to build a better mousetrap,” Reed says. “R&D is vitally important to improve our processes and push the limits of the capabilities of our product,” Reed says. But what do you do with a better mousetrap if there aren’t enough mice to catch?

Impact of Twin Disasters
The Sept. 11 attacks were disastrous for the nation and the economy, particularly so for the airline industry. “Everything just stopped,” Reed notes. “Airlines were struggling to stay in business and weren’t placing any new airplane orders. And if airplanes aren’t being built, there’s no demand for engine parts and the ceramic cores we supply. Our business dropped 40 percent overnight.”

Equally calamitous for Certech was the Enron scandal and the subsequent downfall of the power generation business. “In 1998 we became very busy due to the growing demand for industrial gas turbines used in power generation,” Reed explains. “However, with the collapse of Enron it became evident that much of the demand was fabricated, much like in the fiber optic business which overbuilt in overestimating actual needed capacity. That business totally shut down. We had a plant dedicated to this business segment that went from 100 people to 12 people almost overnight.”

Given its dependence on a narrow market niche, how did Certech survive? “It wasn’t easy,” Reed says. “Fortunately, there was a higher demand in the military segment, particularly for the F-16 fighter program. And we’re starting to see some return in business in power generation; inventories have been used up and they’re starting to need new turbines, though it’ll never be at the levels it was. Finally, after two disappointing years we are seeing positive signs again. We’re on track to hit our planned goals and are seeing improved growth in most of the markets Certech serves.”

Process Improvement
While the injection molding process is labor-intensive, better manufacturing processes reduce costs by lowering labor needs while increasing efficiency. Lean manufacturing, installation of CNC automation, and Six Sigma principles (all managers are trained and have “black” and “green” belt engineers available for projects) have gone a long way to achieving higher production with fewer costs. The company is also in the process of completing ISO-9000 certification.

“We’ve done a lot of aggressive cost-cutting, to the point of making sure the lights are turned off when someone leaves an office,” Reed says. “What’s never compromised, however, is the quality of our product.”