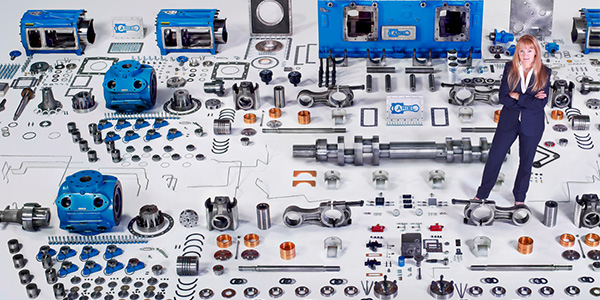 Considerable turmoil has visited the natural gas industry in the past two years. Late in 1998 and 1999, a worldwide, industry-wide slump in oil prices also caused very low gas prices; this led to overly full storage reserves, which in turn brought setbacks for most manufacturers of heavy capital goods serving the natural gas exploration, production and transportation segments of the industry.

In mid-1999, Ariel Corporation, a manufacturer of natural gas compressors used for gathering gas and for pipeline transportation, experienced a significant slowdown. Fortunately, this only necessitated cutting the Ariel work force back to a 40-hour workweek. Ariel’s management used the “breathing space” to institute considerable planning initiatives to meet what they believed would be tremendous developments in the industry.

Today, a number of events are influencing significant changes in the overall natural gas market. The continued development of natural, gas-fired electrical generation, particularly on the East Coast, has caused a potential supply shortage for the first time in many years. These new power plants have increased the demand for natural gas reserves, which were already stressed this past summer because of heightened air-conditioning requirements and because the reserves weren’t replenished. Traditionally, summer is the time storage facilities, such as salt domes, are refilled in anticipation of winter-use peaks. However, the high price of oil and clean-air mandates mean that power companies are now switching to natural gas for electrical generation. Natural gas is virtually pollution-free and is available in tremendous quantities in North America. Currently, the various producing regions have sufficient gas to power the nation well into the foreseeable future – and without pollution.

A tremendous amount of exploration is currently under way for deep gas in the Gulf of Mexico, in the western states and in Alaska. Canada is also discovering and recovering significant gas reserves. Environmental concerns are never far from the minds of industry executives. As a result of so many years of refining, drilling and recovery, as well as pipeline construction, the environmental impact of modern exploration and recovery is very minimal. Furthermore, using natural gas – as opposed to coal, nuclear or oil-fired power generation – means solving pollution problems (as in the case of oil and coal), disposal problems (as in the case of nuclear power) and supply problems (a vast domestic supply means lessened reliance on foreign oil).

The developments of new fields and the recovery of deep gas and associated gas (with oil) will, in all likelihood, continue to grow at a considerable clip for the next several years. The implications for Ariel, as a manufacturer of natural gas compressors, are several-fold. From the start, Ariel’s ability to move fast and recognize market trends has allowed the company to become the market leader. Ariel’s core philosophy dictates that it will continue to respond like a small company while dealing with its continued growth and with the heightened demand for its products. To that end, Ariel has several expansion plans in place, as well as training and productivity initiatives.

During the last year, the market began to roar out of its 18-month slump, and capital budgets for drilling and recovery loosened up as oil prices rose and demand for gas continued its steady growth. Ariel’s chairman and president, John Wright, and his management team instituted a number of changes that lent themselves to Ariel’s ability to act small while thinking big. These company-wide changes have not been without difficulty. As every manager knows, change, while it can be for the good, is always difficult for people. Wright says, “We always keep in mind that our most valuable asset is our people. Consequently, we try to achieve change via buy-in rather than imposition from the top down.”

As Ariel’s annual sales continue to grow at an average of 17 percent a year, Wright sees several avenues of development strategy. “First of all,” he says, “we are really big on the continued development of our people. We have a very comprehensive training program in place and are determined to give our people the opportunity to grow in their skills and interests. Most of our supervisory team is comprised of employees who began as machinists, and who demonstrated the ability and the desire to do more. Not everybody has either the skill or the ability to manage other people. Most Ariel supervisors started their careers working where the people they manage are today. This provides a unique understanding and cooperation between Ariel employees, and also encourages the younger, hungrier employees who have aspirations. We currently have approximately 100 people per month in various kinds of training programs – from computer training to CNC technical skills training and personal, problem-solving training. We are committed to education and training for the foreseeable future.”

Other strategies involve refining some of the changes already in place. The Spare Parts Department, which has been growing at a significant pace, is a study in response and efficiency. Rather than resting on its laurels, the department continues to ship parts within 24 hours – just as advertised. The Spares Team has moved its order-entry group to the shipping area, in order to work more closely with the shipping department to better coordinate the entire team effort. Additional office space is nearly complete, and already the benefits are being seen from this move and restructuring. Ariel’s management stresses a willingness to listen to ideas from employees, from bottom to top; this has spawned some remarkable and workable strategies over the years.

Good and Getting Better

Ariel’s state-of-the-art factory is the centerpiece of its operation. Countless visitors (who have toured other compressor-manufacturing plants) note how impressive this place really is. According to Wright, continued investment in keeping Ariel’s factory a showplace of efficiency and production has been central to its strategy. Ariel is a privately held company and thus “we can think in terms of years rather than quarters,” says Wright. The company puts a great deal of its profits back into growth, and it shows. In the next six months, Wright adds, “we will pursue a very aggressive capital investment in new machine tools, in our plants and in training.” Additionally, refining the material resource planning (MRP) system and tweaking quality-control systems continue to rank high on the “initiative” list. During the course of the last year, the company changed over to an electronic time card system, went to a “daily” production schedule and further refined the cell manufacturing techniques.

In the last five years, Ariel has experienced an erosion in its smaller-horsepower products’ market share (which was the company’s original product offering). While the company continues to concentrate on growing its share in the large-horsepower market (6,000- to 8,000-horsepower units used in the pipeline transmission and storage markets), it has subsequently decided to recapture some of the old business. “Our reentry into that market was extremely successful, and was accomplished by very close work with the Ariel distribution group on engineering and cost levels. On the other end of the spectrum, the company delivered 10 very large units to the pipeline transmission industry. These will serve as the flagship demonstration for an entire product line. Everyone is pretty fired up about the potential business to be generated from this initial shipment, and we expect great sales growth in this area as well,” says Wright.

On the technical/e-commerce side, Ariel has continued to refine the digital monitoring system (DMS), which allows the remote monitoring and diagnostics of compressor operations. Shutdowns in this equipment can cost serious money in lost production, not to mention parts replacement. Since most oil/gas fields are in fairly inhospitable regions, often not even accessible to a paved road, the ability of field service and operations to detect problems prior to shutdown and machine damage is a tremendous money saver. The DMS allows a field technician and an Ariel engineer to discuss the operating conditions of a compression unit even though neither person has to be physically present at the field.

Additionally, on the technical side, the engineering and programming group continues to refine the Ariel’s Windows-based performance calculation program. Since each compressor is generally tailored to a particular set of pressure and operating parameters, calculating the correct configuration of the unit – as it pertains to valves, packings, cylinders, component metals, horsepower, flow rates, engine or motor driver, and vibration and torsional conditions – is essential. As a consequence, development of a good “performance” calculator, which is really an application-design parameter calculator, is of paramount importance in this business. Ariel’s personnel are confident that they have the best the industry has to offer, but again, aren’t resting on their laurels. “If we’ve learned anything in this business (and this probably applies to all businesses), the market is a moving target,” says Kurt Buchwald, Ariel’s design engineer. Buchwald says he was particularly pleased with the purchase of, and training for, a three-dimensional CAD system for the design and engineering group: “We’re getting fairly adept with this very complex system and should be reaping the benefits by the end of this year.”

Over the years, Ariel has concentrated on customer response and field service as critical to the overall success of the company. To that end, the management team has been designing a Customer Response Center, unique to the industry, which will give customers with questions instant access to the individuals who can answer them quickly and succinctly. The team is in place and is modeling its methods on the Spare Parts Team. “We expect this to offer customers an easy and direct route to technical information. In an industry where down time can cost millions a week, technical help and problem solving needs to be an art form,” says Dave McCoy, manager of the Field Service Group.

Ariel’s second generation, John and Karen (Buchwald) Wright and Kurt Buchwald, are energized and ready to meet the challenges of the next decade. “We’re where we are because of hard work and focus, not good luck. We plan to go in the same direction with the same methods as long as we can. Our hope is that Ariel can be a company that lives for generations. When we turn it over to the third generation, if they are interested, the future will be a great place to look toward,” says John Wright. “It’s gratifying to us that Ariel started only a generation ago (34 years) as the little newcomer to the industry, and is today the uncontested leader. We are excited about the natural gas market today, and we plan to lead the pack.”