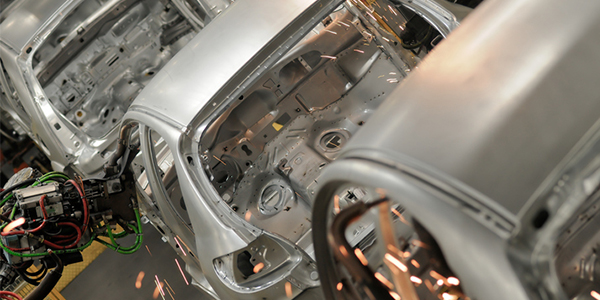 In 1907, an enterprising German immigrant named Carl A. Phanstiehl founded Phanstiehl Electrical Laboratories to supply the fledgling automotive industry with wound coil for its ignition systems. In 1913, at about the same time the automotive industry was undergoing a radical transformation with the introduction of the moving assembly line, Phanstiehl’s company was taking steps toward becoming the specialty metals manufacturer it is today. It began producing tungsten, a rare metallic element used as, among other applications, contact points in ignition systems.

By the 1930s, the company (now renamed Fansteel Inc.), which had manufactured electric irons, battery chargers and radios in addition to automotive parts, decided to focus on its growing expertise, metallurgy. With the company’s production of Ramet® (a trademark name for a grade of tungsten carbide powder), tungsten carbide cutting tools and components became a major business for the company.

In 1950, to expand its cutting tools operation, Fansteel acquired Wesson Tool Company, which now forms part of one of its subsidiaries, Fansteel VR/ Wesson. Through the 1960s, Fansteel continued to acquire businesses with high technical competency in metallurgy. Then, in 1976, Fansteel was bought by HK Porter, a large Pittsburgh multi-industry manufacturer. The company owned Fansteel until 1983, then spun it off to shareholders, according to Fansteel Chairman and CEO Gary Tessitore. “After the spin-off from Porter,” Tessitore says, “Fansteel continued to acquire businesses and technology and to exit certain businesses, and it began changing into what it is today.”

The consolidation of these businesses allows Fansteel to leverage market strategies, technical skills and administrative resources. “Where it’s appropriate, we will share resources, information and technology using those synergies to assist in the overall growth of the Industrial Tools Group,” says McLaren, who was most recently the general manager of Fansteel’s Hydro Carbide operations.

Wellman Dynamics Corporation, a magnesium and sand-castings manufacturer, supplies complex components for helicopters, missiles, rocket engines and jet engines, as well as structural parts for both military and commercial aircraft. At its 285,000-square-foot facility in Creston, Iowa, Wellman Dynamics produces parts for an impressive list of customers, including Pratt and Whitney, Sigorsky and Rolls Royce.

After Fansteel Inc. discontinued its Metal Products division in 1989, it was required by law to decommission the division’s primary plant in Muskogee, Okla., which processed tantalum-bearing ore that also contained low levels of radioactive material. According to Tessitore, the company’s metals reclamation facility in Muskogee will operate as a separate business of Fansteel Inc. “The facility will process residues from the previous operation and extract the metal and chemical values. The plant will produce sodium sulfate, cryolite, tantalum, columbium and scandium,” Tessitore says.

All three business groups have significant growth opportunities through internal growth as well as through complementary acquisitions. Fansteel is committed to long-term profitable growth through leveraging its substantial technological capabilities.