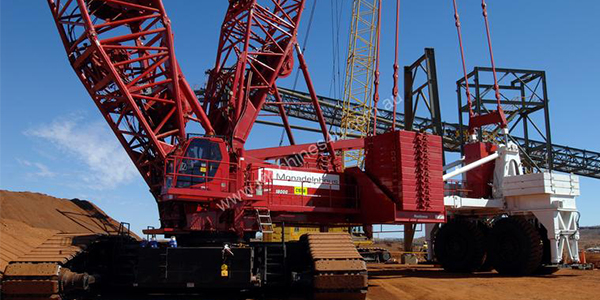 Not many people give even a passing thought to those responsible for making waterborne commerce possible. The media instead bombard consumers with overpaid superstars selling products of every sort. But we would not have many of those necessary commodities were it not for companies like Manitowoc Marine Group, whose quiet hard work and dedication over this past century has passed mostly unnoticed to the average man, woman and child on the street.

The firm was founded as Manitowoc Company in 1902 in Manitowoc, Wis. “It started as a shipbuilding company building carriers for commercial use on the Great Lakes,” says Tom Byrne, president and general manager of its marine group. When World War I broke out, the company built military vessels to help in the war effort. During World War II, Manitowoc built 29 submarines in record time and supplied numerous parts and components for a variety of defense and armament systems.

“When World War II ended, we had too much capacity, so the company diversified into three other product groups,” says Byrne. These efforts led to the company’s food-service, crane and marine operations. Today Manitowoc is known by the company it keeps – mainly the U.S. Navy and the U.S. Coast Guard, as well as the major Great Lakes shipping companies. The company is also known for its unwavering superior quality and fast and efficient delivery.

Virtuoso of the High Seas
Manitowoc is driven by its commitment to economic value-added (EVA) principles. “EVA measures your company not only on growth and profitability, but also on your use of working capital,” says Byrne. “Because we manage all three very well, we are a leading and successful company in new construction, repair, maintenance and inspection.” Operating in facilities encompassing more than 125 acres and a few million square feet, the company projects revenues of $150 million for 2001.

Manitowoc has built 746 vessels since opening its doors for business in 1902. “We have built everything from 1,000-foot bulk carriers to dredges, container ships, buoy tenders and icebreakers,” says Byrne. Manitowoc is the only full-service shipyard company on the Great Lakes, boasting a 1,000-foot drydock at its Sturgeon Bay, Wis., facility. “It’s the only one today that can handle the major-size vessels that ply the lake carrying coal, stone and ore,” says Byrne.

Manitowoc Marine Group consists of four shipyards on the Great Lakes. Marinette Marine Corporation, located in Marinette, Wis., and acquired by Manitowoc in November 2000, is the largest of the four shipyards with revenues of approximately $100 million. It is one of the most efficient builders of midsize commercial, research and military vessels in the country. With this deal, Manitowoc expects to continue to set standards for quality and service on the Great Lakes and for shipbuilding for the U.S. government. The acquisition will enhance its leading position in government vessels. “Marinette’s close proximity to our Sturgeon Bay yard should allow enhanced opportunities for the two facilities,” says Byrne. “Because of its highly efficient production-line approach to shipbuilding, Marinette will enable us to serve a broader range of customers, to carry forward the history of delivering highly technical vessels on or ahead of schedule, and to achieve world-class quality at competitive costs.”

“The vessels we build here are ‘one-of a kind’ ships, not series of vessels as they’ve built recently at Marinette. So they each flow differently through our process, although with the same attention to detail,” says Byrne.

Currently, Bay Shipbuilding has a contract for the construction of the hopper dredge Liberty Island for Great Lakes Dredge & Dock Corporation. This 5,000 cubic-meter hopper dredge will be highly automated and self-propelled. Its extensive piping and control systems will keep the company’s highly skilled crews challenged.

The company’s Toledo Shiprepair Company (TSC) of Toledo, Ohio, is predominantly a repair facility. Byrne says that most repairs occur late in the fourth quarter and early in the first quarter of each year. “That’s when the ships come in for winter lay-up and have repairs, maintenance and refurbishment work done. We will have 14 or 15 vessels here at Sturgeon Bay, a like quantity at TSC and probably two at the Cleveland Shiprepair Company, our fourth shipyard, which is a small facility focused on topside and emergency repair,” continues Byrne.

State of the Ships
“When we launch a vessel at Marinette Marine, it’s 80 to 90 percent complete, whereas most companies launch vessels that are only 40 to 50 percent complete. It’s a very efficient shipyard,” says Byrne of the Marinette operation. “They use very sophisticated methodology to build their ships, including down-hand welding and other work which is safer and more effective.”

The vessels are built by section, and each section is as complete as practical when assembled. “What you eventually wind up with are multiple sections moved to our assembly building,” explains Byrne. “By this time, much of the electrical cabling, components, plumbing and bulkheads are complete so that when the sections are joined, all that is left to do are the fit-outs.” These include more wiring and plumbing, furniture, control systems, mess and galleys – basically, everything necessary to make the vessel livable and operable.

Once a ship has been designed, burns are done to produce cutouts and length cuts from heavy plate steel, which is then formed into the required shapes. The components move from the plate facility to the fabrication facility, and then to the assembly facility where all the sections are put together. “We use our own patented material movers to move these large sections from the fabrication facility,” explains Byrne.

The assembly facility is designed to handle the construction of two vessels at a time. Once the vessel is completed, it is moved to the launch way and then launched onto the Menominee River, which flows right into Green Bay. Launching ceremonies at Manitowoc are festive occasions, drawing hundreds to watch the events. In August 2000, a new Coast Guard cutter was launched with about 50 women in attendance who had served in the U.S. Coast Guard during World Ward II. The name SPAR was given to the vessel, which was sponsored by Attorney General Janet Reno.

The SPAR, under the command of Lieutenant Commander Joanna M. Nunan, will reflect the Coast Guard motto: “Semper Paratus – Always Ready.” Its primary missions will be to maintain and renew aids to navigation in Alaska. Law enforcement, ice operations, search and rescue, and marine environmental protection are also part of its mission profile.
In 1999, BSC delivered the dipper dredge NEW YORK to Great Lakes Dredge and Dock Corporation. The vessel has the distinction of being one of only two barges of its type in the world. It can excavate a harbor bottom at a depth of 75 feet and at a rate of 17 yards of material for every bucket load – enough to fill two dump trucks.

Modern Mariners
Manitowoc’s business continues to progress full steam ahead. “Marinette now has bids on fisheries-research vessels for NOAA (National Oceanic and Atmospheric Administration) and we will be bidding on a Coast Guard icebreaker for the Great Lakes,” says Byrne. “We’ve also recently built a double-hulled oil barge for Exxon-Mobil.”

But all the latest and greatest equipment in the world is second to Manitowoc’s work force of 1,300 employees, who are truly respected and appreciated by the company and its customers. “Our people are really what make it all happen,” says Byrne. “We will pay a lot of attention to the human-resource side of the equation, strive to get people involved and keep them informed. We devote a lot of attention to communication throughout our company.”

Manitowoc plans to double in revenues over the next three to five years. The company will stay its course in continuing to offer the high quality and quick turnarounds customers have come to expect from it. “The Coast Guard will tell you they are very satisfied with the Marinette record of delivering products on or ahead of schedule – and on budget,” says Byrne. “And our Great Lakes customers will tell you that when they have an emergency, they go to Sturgeon Bay because we do whatever it takes to get them back in operation quickly and effectively.

“We certainly are the leader on the Great Lakes and I envision us becoming a much more important supplier both to the Great Lakes shipping industry and to people like the U.S. Navy and Coast Guard.”