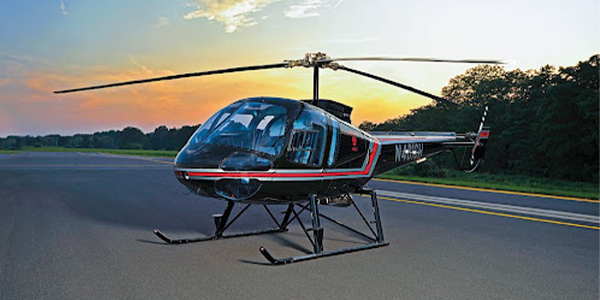 What goes up doesn’t necessarily have to come down. While Keystone Helicopter Corporation operates, maintains and engineers aircraft noted for their singular ability to go straight up and come down the same way, from a business perspective, it’s better to maintain a steadily rising altitude. This is the trajectory the company has been on for more than 50 years.

Keystone was founded in 1953 by Peter Wright, a former U.S. Navy dive-bomber pilot who, during World War II, belonged to the famed Flying Tigers unit that transported arms and other materials in support of Chinese resistance to the Japanese. The company’s first helicopter was the type you’d see in an episode of the old M*A*S*H television series, and was contracted for a variety of services, ranging from offshore oil transport, logging operations, charter flights, aerial mosquito spraying and even Santa Claus landings. As a DailyLocal.com profile of the company points out, “Keystone has come a long way from the company that started with $50,000 in investment capital and one Bell 47G in 1953. ‘Most cars were faster than helicopters in the early days,’ said Peter Wright Jr., son of founder Peter Wright. ‘When we flew passengers to New York we didn’t fly over the turnpike, we didn’t want them to realize how slow it was.’”

Today, Keystone operates a fleet of 34 highly complex twin turbine engine helicopters based in 28 locations and employs 140 pilots throughout the Northeast for air medical operations. In half the cases, Keystone owns the helicopter and provides “turnkey” service to a hospital, and for the other half provides pilots, mechanics and maintenance for a hospital-owned craft.

Initially based out of Philadelphia airport in the keystone state of Pennsylvania, the company relocated within the state to West Chester in 1972 where it had the capability to perform helicopter repair and maintenance. “We were making good money flying,” notes Rick Hinkle, vice president of marketing and business development, “but we found we could make even more money providing third-party maintenance.” This led to the formation of four distinct business units, which together currently account for 60 percent of revenues. In addition to the medical Flight Services, Keystone has dedicated divisions for:
• Helicopter Services: factory-authorized full-service maintenance and completion center for rotorcraft for major helicopter manufacturers such as Agusta, Bell, Eurocopter, MD Helicopter and Sikorsky; a portion of this business is to provide “mission capabilities,” i.e. search and rescue, medical, police or other specialized equipment kits that fulfill a specialized function;
• Engine Services: authorized Roll-Royce, P&W Canada, Honeywell, and Turbomeca maintenance center that provides complete engine overhaul and testing;
• Engineering: provides design, development and certification engineering services for aviation modifications and applications.

All of these services are certified according to strict OEM as well as Federal Aviation Agency (FAA) standards.

Flying High
By the early 1990s, Keystone had experienced significant expansion in terms of both employees and revenue. “We had about 50 to 60 employees and doubled our sales from $10 to $20 million,” Hinkle says. “We’d become the largest and most sophisticated helicopter services operation in the U.S.”

As frequently happens when a privately owned business grows significantly, capital needs increase. Consequently, in 2002, just prior to its 50th anniversary, Keystone was sold to an institutional investment group; the Wrights continued to participate, although Wright Sr. had retired. Further tremendous expansion ensued, with annual revenues heading over the $100 million mark. At the end of last year, Keystone was acquired by Sikorsky Aircraft Corporation, a subsidiary of United Technologies Corporation (NYSE: UTX) of Hartford, Conn., which provides a broad range of high-technology products and support services to the aerospace and building systems industries. Sikorsky, based in Stratford, Conn., is a world leader in rotorcraft design, manufacturing and service, generating $2.5 billion in revenue in 2004.

According to Keystone’s president, David Ford, “While we’re only four months into it, the relationship with Sikorsky couldn’t be better. The norm is that when an OEM purchases a smaller business, it tends to overlay its bureaucracy to the point that it destroys the value of what it purchased. Sikorsky, in contrast, has been adamant that Keystone is to operate as an independent subsidiary. Indeed, while we’ve been a Sikorsky-authorized maintenance supplier for years, we also are for other OEMs that Sikorsky competes against. But rather than turning away from helping their competition, Sikorsky is encouraging us to continue to pursue those relationships, which it should because that’s what’s made us successful.”

Hinkle adds, “Sikorsky recognizes that our customer base comprises relationships with other OEMs and their desire – and ours – is to not only maintain these relationships, but work to make them even closer.”

It’s a win/win situation because Keystone benefits from hands-off management while at the same time it can tap into its parent’s greater marketing and engineering, as its capital, resources.

Strategic Fit
“Keystone is a great strategic fit for Sikorsky, providing us with proven leadership, a highly skilled workforce, and dedicated operations for the completion, customization, and support to meet the increase in demand for Sikorsky helicopters,” said Sikorsky President Steve Finger in a press release announcing the purchase. “This acquisition allows Sikorsky to meet growing demand for its products and services while adding flexible internal capabilities to meet increasing industry requirements for highly-customized commercial aircraft for a broad portfolio of customers. Our mutual strengths, combined competencies, and Keystone’s excellent relationship with Sikorsky, as well as with Agusta, Bell, Eurocopter, MD Helicopter, Rolls Royce, Pratt and Whitney and Turbomeca, provides a spectrum of aircraft and aftermarket services that will create new opportunities for the customers and employees of both organizations and creates value for our shareholders.”

Keystone has a strong marketing program, according to Hinkle, and a well-recognized brand name. Keystone has a sales specialist within each business unit assigned to a specific discipline, i.e., avionics or engineering. The company also attends all of the major helicopter exhibitions“We’ve been successful in large part because of our ability to be reactive,” Hinkle says. “When a customer has a technical issue, you’ve got to have the resources that can quickly analyze and respond to whatever the need is. That’s why we have a very high percentage of repeat customers.”

Continued Expansion
In terms of physical plant, these resources include a 67,000-square-foot maintenance base in West Chester, a 130,000-square-foot facility in Coatesville, Pa., and a privately owned public-use airport (Pottstown/Limerick (Pa.) Airport). According to Ford, “We’re looking to open a new facility shortly to add 30,000 square feet for paint and composite operations, and we have permission from the local planning board to add another 75,000-square-foot hangar to be operational in late 2007. Our five-year plan is to expand to about 300,000 square feet on 27 acres to accommodate about 1,200 to 1,500 employees on site.”

Expansion is justified by a rising demand that has caused Keystone to be, as Ford characterizes it, “busting out the walls.” He says that while there is currently a backlog in some areas, “Particularly for maintenance, you can’t just ask people to wait outside. You need to have emergency capacity both in terms of reserving space and additional manpower.”

Ford notes that Keystone has the flexibility to add shifts to extend its normal 12-hour workday to 24 hours, and can augment its workforce with contract employees whenever capacity surges. Given the skilled labor that’s involved, however, finding qualified people is becoming a problem. “It’s easier to build buildings than it is to get the skilled workforce you need. This is becoming one of the biggest and extremely difficult issues in our industry,” Ford says. “When I got out of school, aerospace was the business to be in. But that’s not the case these days. I was just reading about a school in Jacksonville (Fla.) that provides the FAA certification required to perform airframe maintenance. You know who the biggest employer of their graduates is? Walt Disney. The electronics, pneumatics and hydraulics of all the rides and exhibitions are more attractive for people to work on than actual aircraft.”

Another problem is that the military has traditionally been a major source of skilled labor. “Right now, because of Iraq and the fight against terrorism, the military is trying to hold onto its people as long as possible. That’s making it a tight market for us in the civilian sector.”

Rotating Market
Despite the fact that helicopters are complex aircraft and not the easiest to fly, their unique capabilities makes them somewhat impervious to such factors as rising fuel costs. “The best and safest way to get to an offshore drilling platform is via helicopter,” Ford says. “There’s really no other way. The oil companies tried doing it with boats but it just wasn’t feasible. In some cases, a hospital might decide that an ambulance might be better transport than a helicopter just to provide a taxi service, but in life-threatening situations, a 10-minute ride is much preferable to two hours. Even in the VIP area, companies realize it’s more cost-effective to use a helicopter as an alternative to having highly-paid executive waste time sitting in a limousine or waiting in line in a commercial airport.”

Still, Ford concedes that every business has a price point they can’t exceed, and Keystone is no different from any manufacturer in needing to control its operating costs. “We implement lean manufacturing. Another major advantage of becoming part of Sikorsky is we can tap into their ACE program – Achieving Competitive Excellence – that’s their versions of Six Sigma and other best manufacturing practices.”

Taken from another direction, another way to keep and maintain market share is to continue to innovate. An example is Keystone’s new Silencer™ noise attenuating interior introduced this past February. This retrofit technology works in virtually any rotorcraft to provide significant noise suppression inside the cabin and improved structural integrity, with no loss in fuel efficiency, something that’s on everyone’s mind today as oil prices continue to rise. The system is an advanced carbon fiber skeletal structure that integrates with virtually any configuration interior (i.e. Corporate, Utility, EMS, etc.).

Even as business continues to grow sky high, Ford notes, ”It is a fluid environment and we have to be on top of changing demands, both in terms of technology and applications. Our customers look to us to provide value, both in meeting complex maintenance and overhaul needs, in a timely fashion. Despite our long history of demonstrated success that has resulted in such a high rate of expansion, we’re starting a new chapter in working with Sikorsky. One of the questions they asked us is who do our customers want us to be and what kind of value can we bring to them? I think the answer is in part to build on what we’ve already built. But, there’s even more we can do and will have the capabilities to do. That’s what we’re looking at now.”

This means that even as Keystone continues to hover on top of rising success, it’s going to ascend to even higher heights.