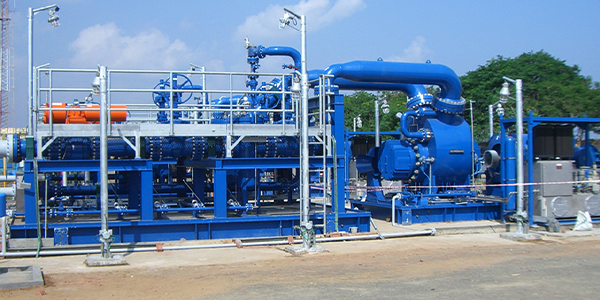 Think of 250 million Chinese citizens, by 2050, descending on coastal China to live and work and you have a tidal wave of complex issues with which to deal, not the least being securing an infrastructure that can treat and control the water supply.

In the United States, the probability of huge surges in population along the coasts is no less daunting. In fact, shortage of water in the San Francisco Bay area, which has, through a network of reservoirs that are fast drying up, supplied water to Southern California, is of late a political monsoon, as environmentalists clash with legislators who want to redirect the coveted water toward the state’s southern tier.

It is a problem that takes up every minute of the day at ITT Fluid Technology, a division that operates within giant ITT Industries and has devoted its existence to developing technologies that aid in the safe, clean and efficient control of water.

Explains Bjorn von Euler, director of corporate communications, “If we don’t understand the urgency of the water situation we will have a big problem. It’s important for everyone to realize and understand how to save and protect clean water because there is no more water – what we have is what we have.”

But before you imagine humans that can, through some miracle of evolution, adapt to a world without water, imagine instead societies that can more efficiently manage their water supplies. And in many areas of the globe, such programs are viewed as critical to the environment.

“If you could just reduce the use of water – for example, in agriculture – from 70 percent to 60 percent, we wouldn’t have a problem for as long as you can project,” von Euler stresses.

For those in the water and wastewater industry part of the battle is in convincing politicians that changes need to be made. “We have in the U.S. a lack of $21 billion to update water and wastewater infrastructures that are outdated – that’s why you’re always hearing about water main breaks. Towns should pride themselves on being able to provide the safest drinking water, but it’s just not a priority because no one wants to raise tax bills.” And this is silly, von Euler says, adding, “If you buy a bottle of water, that water is perhaps one thousand times more expensive in that bottle than from the tap.”

Tributary technology
Suffice to say, with a society that sees bottled water as a convenience that can’t be eliminated, ITT Fluid Technology has its work cut out. The company, however, has made major inroads in the U.S. as well as in other areas of the world in supplying technologies and systems that can achieve the goal of delivering clean and safe drinking water in a cost-efficient manner.

The Fluid Technology arm of ITT Industries, formed seven years ago from the old ITT company, famed for decades for its telephone business, is the largest operating segment within ITT; in fact, Fluid Technology, explains von Euler, represents 38 percent of the company’s global $6.8 billion business, or $2.6 billion in 2004. Other management companies include defense and electronics, electric components, motion and flow control.

ITT’s Goulds Pumps has the distinction of providing the widest range of industrial pump systems with millions of installed products around the world.

For the most part the drivers of the water, wastewater and HVAC business are population growth, water scarcity and more stringent regulations. And with more than eight billion people that will crowd the planet by 2025 a greater demand for water will be created.

“Another problem is that with more people you need more food,” he notes. “Agriculture uses 70 percent of the water supply globally and approximately 60 percent in the U.S. In addition, 20-25 percent of water use comes from the industrial sector with the rest – an average of 400-600 gallons – used per day, per household in the U.S. “We’re top in water use,” he adds.

This water comes from reservoirs, lakes and rivers and is pumped from aquifers, which are quickly drying up. In these cases, salt water often seeps in, especially in those same coastal areas that are expected to see huge population booms within the next several decades; von Euler notes that in the foreseeable future, “75 percent of the world’s population will live within 150 miles from the ocean.”

Desalination and reuse
How do you shower and cook and water the plants with water in such short supply? ITT Fluid Technology offers two answers; the first entails desalination programs. While an expensive solution in the past, costs are rapidly declining with improvements in electricity technology, von Euler notes. “In some areas there’s no choice but to do desalination because very little is left in the aquifers.” For this problem, the company’s Aquious division manufactures seawater RO (reverse osmosis) systems with outputs ranging from 3,000 GPD to several million GPD with modular units. These state-of-the-art systems are designed to ensure peak performance and long life.

The second answer is in water reuse. In Singapore, for example, new technology has been introduced to treat and reuse water to the point at which it is as good as new again. This effort coupled with huge educational program is behind the launch of “New Water.”

“In simple terms, the water is treated, discharged into a small aquifers and distributed back into the system. Even if we choose not to use the treated water for drinking, there is so much we can use re-used water for, such as irrigation or watering lawns, and agriculture,” he adds. “This is gaining more momentum.”

Disinfecting water is also gaining ground; it involves treating fresh water so we can reduce chlorine content as much as possible; to disinfect, ozone and UV are used. Currently, ITT Fluid Technology is involved in one of the biggest disinfection projects in the world, in Vancouver, Canada, and sees more such projects on the horizon.

Other projects in which ITT Fluid Technology is involved include:
• El Dorado, Ark.: Facing a water shortage during peak usage times, the city asked ITT Industries’ Flowtronex unit to design and manufacture an efficient, modular, skid-mounted pumping system to draw water from five new deep wells.
• Newport News, Va.: With a pending shortage of drinking water, a municipal water utility here used a new technology for a reverse osmosis system to tap a brackish groundwater supply. With design, technical support and operator training from ITT Industries’ Water Equipment Technologies (WET) unit, the municipality was able to quickly augment its safe drinking water supply and enhance the quality of its overall water supply as well.
• Cooper City, Fla.: When the municipal water supplier here was faced with a challenge to meet regulations imposed by the Enhanced Surface Water Treatment Rule, it began the process of implementing a new technology called nanofiltration. With products and technical support from ITT Industries’ WET unit, the supplier successfully implemented a new and cost effective water filtration technology that enabled conformity to the new regulations.

Smart technology
Hand in hand with these water programs are new innovations from ITT Fluid Technologies. Among these is a new submersible pump, the N-pump manufactured under the company’s Flygt brand, which has revolutionized the industry because of its efficient use of energy, an important feature, considering the amount of energy that pumps require to operate. Another system called PumpSmart(tm), marketed under the company’s Goulds pump brand, is embedded with software, which resides in the controller microprocessor chip, and acts as the brains of the system, allowing the pump to monitor and react to any system condition. The result is often dramatically lower lifecycle cost.

ITT Fluid Technology also manufactures custom pumps, usually used for raw water intake or flood control. In fact, von Euler notes, in New Orleans 35 of these pumps were installed to keep the city dry and their use was also proven effective during Florida’s recent hurricane season.

In the area of treatment, ITT Fluid Technology has developed micro-bio reactors or MBRs, highly efficient micro-filtration units used in municipal applications or for industrial applications. “This is a very viable alternative,” von Euler says, noting that many industry sectors use a great deal of water for processing and need this water to be the highest quality water. “This is an expensive proposition,” he adds. “It’s more economical to reuse the water.”

A new and emerging area for ITT’s expertise is in the bio-pharmaceutical industry; here the company builds skids, which are systems made of extremely high-polished stainless steel, manufactured with a network of pipes and valves that are used in various processes. “These are all custom produced, high-quality valves. This area was leveraged from our valve business and is a new market for us.”

Von Euler adds that the division is now looking to expand and provide “even bigger and more complete services to municipalities, as well as industry and commercial water users.” Areas to be considered include the handling of sludge or bio-solids, which in many countries are considered hazards. “It’s a big issue for municipalities and we see it as a growth area,” he adds.

As ITT Fluid Technology sets its sights on inventing more effective technologies for handling and controlling water, the company has not forgotten its role as educator. And to aid in this pursuit, von Euler has become a proponent for the restoration of a relic from the Industrial Revolution that is set to play a key role in providing an understanding on the delicate balance of our water supply. The Hackensack Water Works in New Jersey was built in the 1880s and by the turn of the century, because of a very progressive management team, became the standard that would guide other utilities in the provision of clean, safe drinking water. Saved from the wrecking ball a few years ago by a band of intrepid local citizens, the water works and its still-in tact network of one-of-a-kind machinery, is projected to become an education center, and will play a key role in helping emerging populations, as well as our own, understand water and its role in society.

Because of its proximity to major universities within the New York area as well as important government institutions, von Euler says, the water works can serve as an education center for people wanting to conduct research on the history as well as the technology behind the safe handling of water. “This center can play a vital role in becoming an education facility; it is important for people to comprehend that effective water control and management are necessary to our future as a society.”