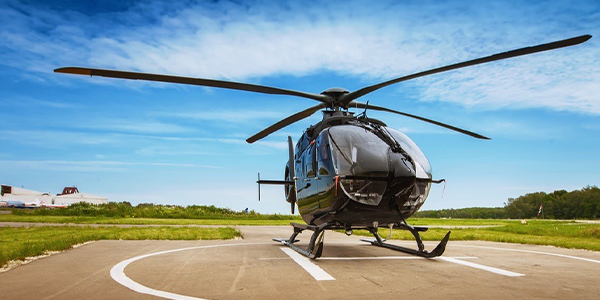 Fly in to ACROHELIPRO’s hub at Vancouver International Airport. There, North America’s Sales and Marketing Director, Shaun Stubbs, will make one thing immediately clear: “We can entirely strip and rebuild, all under license.” So whether flying most Bell, Eurocopter, or Sikorsky brand helicopters operating with most accompanying GE, Pratt & Whitney, Rolls-Royce, or Turbomeca engines, says Stubbs, “We can do the structural repairs, the engine repairs, the avionics repairs, the dynamic component repair, and have our customers up and flying, all in-house, all OEM-certified, all OEM-approved.” And because it is all done under license, that offers customers a unique “peace of mind,” says Stubbs, “that if there is a problem down the road that the customer knows not only do we stand behind our product but the manufacturer stands behind our product as well.”

The company has been standing behind helicopter repairs and overhauls for decades after seeing the advantage of providing in-house support services. In 1947, the company started out as Okanagan Air Services, flying aircraft for agricultural applications in western Canada. By 1949, it had moved its operations to Vancouver and renamed it to Okanagan Helicopter, Ltd. According to the Royal British Columbia Museum, by 1954 the company already had become the world’s largest commercial helicopter operator. Then, as it grew further, leadership noticed that helicopter maintenance was the major cost driver for applications. Stubbs says that the engineering division “first started servicing its own Rolls-Royce 250 engines on the Bell 206 series helicopters, and then evolved to maintain other engine-helicopter combinations.”

In 1987, the Canadian Holding Company (CHC) acquired Okanagan Helicopters, and spun off the maintenance side of the company, creating Vector Aerospace in 1998, the parent company of ACROHELIPRO’s Global Services Inc. That separation, says Stubbs, makes it a lot easier to approach customers: “We wanted to approach the third-party market a little more independently. The separation has allowed ACROHELIPRO to go after those customers who previously thought about the company and CHC as one and the same. We grew and grew to where we are today,” which is about a $130-million business.

Expanding Capabilities
“We’ve come a long way,” explains Stubbs, “from a grass-roots helicopter operator to where we are today, with facilities spread across North America to look after the maintenance of helicopters.” Looking around ACROHELIPRO’s hub, a 158,000 square-foot facility in Vancouver, and the first thing that might catch the eye is one or more helicopter fuselages. Stubbs says sometimes customers have a strict timetable to meet, “So we will have a spare fuselage built up for a customer, remove the components from the customer’s aircraft, and get customers on their way in as little as half the time as it normally takes. We offer that service on virtually all the product lines that we offer.” In addition, says Stubbs, “We tailor each repair or overhaul to the customer’s needs.”

To meet those many varied needs, Stubbs says employees can completely strip and rebuild in a matter of months as well as provide the most critical hot-swappable option: engines. Says Stubbs, “We also offer lease options. So, for example, we can lease customers an engine while they have theirs with us for overhaul.” Service also includes trained professionals who can go out into the field and conduct maintenance and repairs, further reducing aircraft downtime.

Engineering Success
“We’ve got our own in-house machine rework shop which includes CNC machines, plasma booth, tig and mig welding booths, and our own complete engine-test facility that tests all four engine lines that we maintain. We’ve got that all in-house; we do not subcontract out any engine testing. It’s all done within our facility.” Recent acquisitions further improve ACROHELIPRO’s engine capability, says Stubbs. “We’ve also just completed construction of a Sikorsky Main Gearbox test facility here in Vancouver” for testing components old and new.

In addition to engine and gearbox repair and overhaul, Stubbs says there is a whole suite of tools for rotor blade repair in the company’s rotor-blade shop. “We do bonding, resurfacing, tip cap replacements, any composite repairs to the blade itself. Our largest capability is on the Bell products’ main rotor blades. We’ve got limited capability on the Eurocopter main rotor blade, and we’ve got some capability on the Sikorsky blades as well.” Finally, while most of the helicopters ACROHELIPRO service have skids in lieu of folding landing gear, Stubbs says because the company focuses on serving entire platforms, it also services those landing gears. Says Stubbs, “The Sikorsky S-76 is the primary example: we have full capabilities on that landing gear.”

With all of that capability, Stubbs says customers get the best of both worlds: competitive prices and OEM-quality work. “We know if we don’t, then we wouldn’t see the growth in the business that we’ve been seeing in the past few years.” That growth is about 5 to 6 percent annual growth in the past few years. “We feel that in the post-9/11 world, that’s fairly good growth for our particular sector. It took a lot of people time to recover from that,” says Stubbs, especially the helicopter tourism sector. “Our company is mirroring the projection of the overall helicopter business. And that projection is anywhere from a 10 to 20 percent growth for the next few years, not only in new helicopter sales, but in overall usage.”

Gaining Market Share
ACROHELIPRO’s history and growth percentage have meant about a 4 percent market share worldwide. Stubbs says that could easily be higher except for OEM territory restrictions. “We have a larger market share within North America, but North America also encompasses a lot of military aircraft that we do not have access to for the sole reason that the U.S. military may look after a lot of their maintenance in-house, so they carry out a big percentage of the whole. But within the North American market, we have a 10 to 12 percent market share.” Stubbs estimates that approximately 20 to 25 percent of the market is available, so there is room to grow.

One of the ways ACROHELIPRO is growing is via a variety of customization packages, including fuselage-mounted cameras and lights for the entertainment industry or law-enforcement agencies, as well an engine-upgrade program for more lifting power.
In the North American market, Stubbs says the company hopes to further leverage its experience with the Canadian military to get some further penetration into the U. S. military market. Three years ago, the company took the step of setting up a structural repair facility in Alabama to help tap that market. In addition, to further service commercial aircraft, the company set up a 1,600 square foot facility in Los Angeles two years ago and is taking steps to set up another 3,000 square-foot facility in Dallas for engine repair. Stubbs says the Dallas-based facility also will be available to serve Central America and even South America.

As for expanding in the worldwide market, Stubbs says “There are some other manufacturers out there, some Russian manufacturers and some European manufacturers, that we simply don’t have capabilities on the aircraft. But we figure that we’re sitting fairly well as it stands right now for looking after some of the North American market. Worldwide, we’re just starting to expand into the international scene a little bit more, and that’s just in the past year. We’ve appointed a new international marketing team, and that’s going to be our big target on the commercial side. We feel that we bring the North American zeal for customer service to the international marketplace, and we’d like to give people a choice in Europe, Southeast Asia, Australia, and New Zealand markets too.”