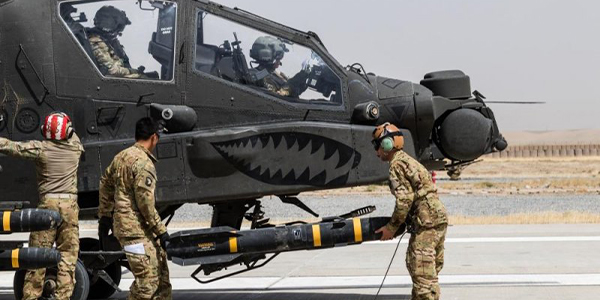 After World War II, the United States seemed content to settle into a period of post-war peace and prosperity. Most returning veterans and their families sought a quiet existence of steady jobs, mortgages and other conventional elements.But the pilots who soldiered the sky in bombers and fighter planes sought something a little less conventional. They didn’t want to be grounded just because the war was over. Such post-war restlessness was especially prevalent in California, where some ex-fliers took to riding motorcycles to satisfy their continued cravings for motion and excitement (that’s how the Hells Angels began). However, other ex-fliers funneled their passion into more practical pursuits, applying their flying skills to establishing aviation-related commercial ventures. This provided the seed for one of the most successful and enduring companies, DynCorp International (DI), which traces its beginnings back to 1946, and a fledgling company called Land-Air, Inc.
“The real nucleus of the company was formed when Land-Air merged with California Eastern Airways, which was founded by a group of former World War II pilots,” reports Greg Lagana, senior vice president of communications for the Irving, Texas-based DynCorp International.

California Eastern Airways pilots were able to continue their air adventures by transporting freight to the Middle East and Far East. On the other hand, Land-Air, as a company, was more concerned with the maintenance and design of aircrafts. So, the merger brought together two diverse elements into a common enterprise, establishing a versatility that would characterize the company’s evolution. Today, DynCorp International is a hugely successful and multi-faceted global operation.

A leading technology, professional services, and project-management firm, DynCorp not only boasts expertise in aviation services, but its business units offer a range of services for customers in government and private industry. For almost 60 years, it has provided critical military and civilian support, in the process becoming one of the U.S. government’s top contractors.

Those restless WWII pilots would have found a lot that’s appealing about the company’s present activities. In many projects, DynCorp International works behind the scenes to support U.S. military and diplomatic efforts on the front lines. It has worked in such hot spots as Bosnia, Haiti, and Kuwait in support of U.S. political and military objectives. In Bolivia and Colombia, it is involved in narcotics-eradication activities for the Department of State, and in places such as Afghanistan and Iraq, it provides security services and personnel.

Besides the Department of State, DynCorp International and its predecessors have worked with other government agencies including the Drug Enforcement Agency, Department of Justice, the Environmental Protection Agency, and Department Of Defense, among others.

But DynCorp International has evolved into more than just a government contractor. In recent years, it has focused on expanding its activities in aviation and project-management toward more commercial clients.

Propelled by Major Contracts
It was not long after the merger of Land-Air and California Eastern Airways that the company landed the contract that put it on the map in government contracting. In 1951, Land-Air was one of the pioneer companies selected to provide contract field teams (CFTs) to the U.S. Department of Defense. “That was a major development that really pushed the company forward, because it was our first venture into major government contracts,” indicates Lagana. “We were one of the first companies to do this kind of work.” He explains that such teams deploy maintenance right in the field. “Planes don’t have to be brought back to a central place to be maintained,” he says. “They can be maintained at their bases.”

More specifically, the teams include technicians who provide mission support and depot-level repair to military aircraft and weapons systems. Although DI has branched out into different kinds of aviation contracts for the United States military, it has held the CFT contract continuously since 1951. The company currently maintains rotary and fixed-wing aircraft for all branches of the U.S. Armed Forces throughout the world, for foreign governments flying American aircraft, and for commercial aviation companies. “We deploy any number of people around the world,” says Lagana. “We have the flexibility to deploy technicians in almost any number for long- or short-term needs.”

Another major development took place in 1991. “The State Department was suddenly given responsibility for an air wing to conduct anti-narcotics activities. And State doesn’t do aviation, so they needed to find someone who could,” explains Lagana.

That’s where DynCorp International came in, and it took the company into areas such as Colombia and Afghanistan. However, horizons were broadened in more ways than one. “That contract, in and of itself, was big; but it also opened us up to the possibility of doing civilian policing, which became a major program-management contract for us,” reports Lagana. “We actually recruit, train, equip, and deploy police officers, sometimes to do civilian policing, under the United Nations or other international peacekeeping organizations. We also train police and a very limited number of troops. That has become a big part of our business.”

Since 1994, DynCorp has recruited, trained, and deployed more than 5,000 highly qualified civilian peacekeepers and police trainers in various countries for the Department of State.
In addition to its substantial and ongoing growth, the company continues evolving, as it is now a world leader in providing professional services and project management capabilities, serving different governments, corporations, and international organizations.

In the area of facilities management, DynCorp is a leading international provider of base operations and maintenance services for military installations, facilities, and equipment. Clients are afforded a full roster of support services, from automated work control to preventive maintenance programs. Specific services include communications and electronic equipment, office machinery and microcomputer maintenance; property and equipment control; hazardous materials handling, storage, and disposal operations; civil, electrical, environmental, and mechanical engineering services, among others.

In addition, DynCorp is involved in infrastructure development and management, applying its wide-ranging experience and comprehensive expertise to the development of airports, highways, and industrial zones, including major airport projects in Serbia and Nigeria.

Security and Military Training
Much of DI’s current activity entails complete security services, as it provides law enforcement and security personnel that can be deployed at a moment’s notice. Its staff is fully trained to work in various world cultures. Services include law enforcement recruiting and management, cultural training, personal protection services, and the design, installation, and operation of security systems. DynCorp International also provides personal physical security to protect facilities and personnel of government and private industries.

In particular, DynCorp security personnel, working with the Department of State’s Bureau of Diplomatic Security, help protect American diplomats and diplomatic facilities in high-risk areas such as Afghanistan and Iraq. “In places like that, there aren’t enough security officers to provide the necessary protection that enables diplomats to move around freely,” points out Lagana. “We provide equipment, personnel and training in places where the State Department needs augmented security.” Staff also has protected foreign leaders whose safety is vital to U.S. interests.

Similarly, since 1994, DynCorp began offering international police and military training. The company has assisted the U.S. government in training civilian police forces in countries such as Bosnia, Kosovo, East Timor, Afghanistan, and Iraq.

In training a group such as an Iraqi police force, Lagana indicates that the eventual goal is to build a professional police force that can provide security, solve crimes, can avoid abuses, be competent, and understand modern policing methods. “We’re doing that in Afghanistan as well, where progress has been a bit better, because the police aren’t attacked as much,” he says.

Moving into the Commercial Sector
As the company continues developing, Lagana says DynCorp International has become strongly focused on taking all of its competencies into the private-industry arena, for market-based projects.

“It’s not just for the government anymore,” he says. “We’re managing construction projects, moving into energy services, and providing integrated security for private businesses; for example, in petroleum industry. This is part of a big push to broaden our business, to develop a larger and completely commercial side that’s not based on U.S. government contracts.”

Recent activities in this direction include airport construction projects. Currently, DI is in the process of designing and building an airport facility in Akwa Ibom, Nigeria. When completed, the airport will be the most modern and comprehensive airport facility in West Africa. The project is being carried out in two phases, with the first to be completed in December 2006. Phase one includes a 4,200-meter runway, taxiways, an air-traffic control tower, apron areas for aircraft parking, an aircraft maintenance, repair and overhaul (MRO) facility, a control tower, an air-rescue and firefighting facility and all required support infrastructure. The MRO will accommodate two 747-400 aircraft, and will be used for full-service aircraft maintenance, including engines. Phase Two, to be completed in December 2007, includes the cargo facility, a terminal building with passenger-loading bridges, an aircraft maintenance and repair hanger, an air cargo facility, a free-export processing facility, and a 300-room hotel.

No doubt, if those WWII pilots who helped start it all could see what DynCorp is up to these days, they’d be proud. It’s easy to envision them, in their leather bomber jackets and aviator caps and glasses, signaling their approval with an enthusiastic thumbs-up and complimenting the company’s considerable success with an appreciative exclamation: “Airborne!”